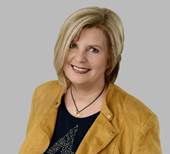 After studying law, Cordelia Von Gymnich began her career with Messe Frankfurt in 1989. After holding various positions including Area Sales Manager for Latin America and Director of International Sales, she was appointed VP Entertainment, Media & Creation and held this position for 15 years. Since 2013 she has been responsible for Paperworld, Creativeworld and Christmasworld and since May 2016 has been concentrating wholly on these three trade fairs.