29 May 2007 — Bentonville (ARK): Wal-Mart Stores will sell Dell computer desktops across 3,500 Wal-Mart and Sam’s Club stores in the US, Canada and Puerto Rico, from 10 June.

Wal-Mart will carry two new desktop models, each offered in a package bundle for less than $700.

Earlier this month, Wal-Mart announced it was entering the next stage of enhancing the offerings and brands within its newly remodeled and expanded electronics areas.

Gary Severson, senior VP of entertainment and electronics for Wal-Mart Stores US, said: "Our customers trust in Wal-Mart and Sam’s Club to provide the most convenience and best value on today’s top products and services. Dell is a proven electronics brand and adds a new compliment to our other high quality desktop selections, and we’re very excited to now bring our customers new access to a product they want, with the ability to purchase a Dell right away." 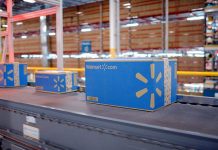