The total rebate payments paid in 2006 reached a record high of $26 million, nearly a 15 percent increase over 2005 payments.

2006 proved successful for TriMega as a result of strong membership growth of 15 percent, taking total membership to more than 500 dealers, as well as the launch of the TriSupply Program sourcing initiative with United Stationers and SP Richards. 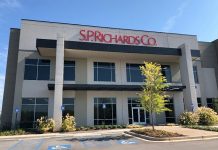