Midwest partner Jeff deMarco told OPI+ that despite a busy December, the system has been working well and has provided all the benefits the company was looking for. "After only six weeks on the new platform, we are already mining our data to fine-tune our marketing plans," he said. "Another immediate short-term benefit has been in the area of back-order reduction. By using the ATP or stock check module correctly, we are on the road to completely eliminating costly back-orders.

"Long term, we believe that we can grow our business rapidly without much in the way of back-end incremental cost," he added. "The biggest benefit short and long term is that after 16 years as a company, we finally have our hands on timely and accurate financial data."

This news heralds the beginning of what could be a tremendous success story for both SAP and United, which, with 80 per cent of its sales coming from the independent dealer community, relies on keeping dealers happy. Ed Rodham, VP of marketing at United who has been closely associated with the project, told OPI+: "We are very pleased with the success of the first installation at Midwest. It was completed on time, and the system has been extremely well-received by the employees of Midwest, as well as its customers."

Gary Fromer, SVP of managed services for SAP America, is equally content. "Midwest has installed a system that enables them to run both their customer-facing (e-commerce) and back-office (such as financials and order management) processes. The e-commerce system makes it easier for their customers to do business with them, resulting in increased sales and customer loyalty."

The software, which is available to all dealers no matter which wholesaler they buy from, was jointly created by SAP and United, along with an advisory council of independent OP dealers (including Midwest), to help empower independent dealers to compete more effectively in an environment in which technology has dramatically changed consumer buying habits. SAP has said it plans to update the technology on a regular basis.

But like any software installation, it was not without its problems, said DeMarco, although luckily a team addressed these issues immediately, so the risk of installing the new system was mitigated. In fact, DeMarco commented that of the four significant software conversions Midwest completed in the past, its SAP installation was way ahead of the curve in terms of its go-live process. Since the installation, he has described the quality of SAP as "incredible".

But now the guinea pig process is complete, DeMarco expects the next dealer that installs the software to have "incredibly smooth sailing". He also offered a few words of advice on the planning process. Firstly, he said, it is essential to stress the benefit of the system for the company, "because if upper management is enthusiastic about the change, the rest will follow".

Also, DeMarco warns that dealers should not expect to get their arms around all aspects of the software immediately. "Segment your operation into functional areas and have people become SAP proficient in their area before cross-training into new areas," he told OPI+. "There is a lot to learn so don’t attempt it all at once."

SAP claimed the Midwest conversion has been a learning experience for it, too. "Because of the breadth and depth of the SAP solution, we have learned that it is most efficiently rolled out in phases, so that the dealer’s internal users and its customers have appropriate time to be exposed to the solution’s capabilities, power and breadth," said Fromer.

The project’s prospects look extremely rosy. United’s Rodham claimed the wholesaler felt "encouraged by the intense interest" in the new solution and told OPI+ that nearly 500 dealers have already expressed an interest in SAP, and that dealers are signing contracts for additional installations beginning in April and beyond.

Based on this response from the dealer community and the success at Midwest, Fromer said SAP is now aiming for "high dealer adoption", but he added that the company will "balance these expectations with the necessity that we focus our attention on the success of each dealer".

Midwest, for one, couldn’t be happier with the product’s potential and its value for money. "Our total IT investment after SAP is basically the same as before. In the past we were spending dollars to basically stay two or three years behind the major players. Now the same amount is being spent to be on the same field or even beyond our competition…the future for the independent dealer community just got a lot brighter." 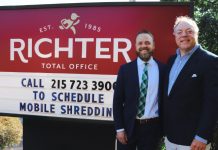