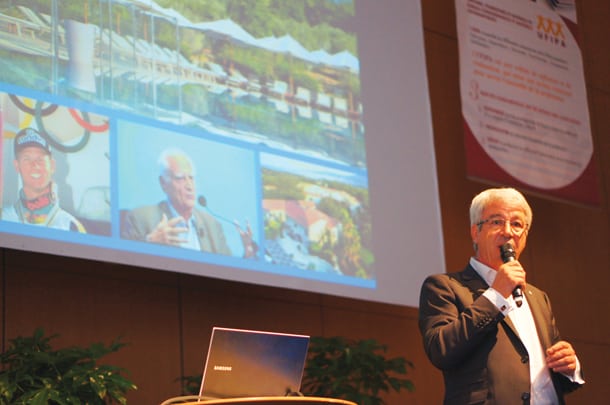 The French market is expected to improve next year, although it won’t move into positive territory, delegates at this year’s UFIPA conference were told in June.

Presenting his now traditional annual economic overview of the stationery and office supplies market in France, industry consultant Didier Darmerval forecast an overall decrease of 1% next year, with the B2B channel expected to outperform sales to consumers.

That is an improvement on this year, with current figures suggesting an overall B2B decline of 3% for 2013. Even excluding the secular declines in certain traditional categories, key indicators such as industrial output, corporate taxation, unemployment and household spending power are all pulling against a return to growth. Consumer confidence has also slumped in the last few months after a brief honeymoon period following last year’s presidential elections.

The office superstore channel continues to buck the trend and is set to grow by 1.5% this year, buoyed by new store openings from local market leader Bureau Vallée. In contrast, the direct and traditional reseller channels are predicted to be down by 4.5% and 3.5% respectively, according to Darmerval’s research.

The last 12 months in France have been marked by the liquidation of leading reseller group Buro+ and the acquisition of reseller group Rouge Papier by wholesaler and distributor Carpentras Sign. The Buro+ name has been kept alive after its trademark and certain other intangible assets were bought by European distributor ADVEO for €380,000 ($490,000), while the market has seen a new name in the form of dealer group BuroLike, a move by BPGI member Majuscule to win market share.

Despite the turbulent market, it was in a spirit of conviviality and optimism that the French OP industry gathered in the south of the country for the annual two-day event run by trade association UFIPA, whose Chairman is Marcel Ringeard of Pilot Europe.

Veteran philosopher and member of the Académie Française Michel Serres captivated the audience with his vision of the changing world in which we live, although this did raise more questions than answers for the OP industry, certainly on the subject of digitisation and the future role of paper-based products in business and in society as a whole.

There were concerns raised by many delegates about the impact on purchasing habits of new workplace tools such as smartphones and tablets and areas such as digital document storage. Product and services diversification and the establishment of a strong web presence, both in terms of e-commerce capabilities and social media, were two suggested remedies.

UFIPA provided an update on its sustainable development product labelling initiative that was announced last year. This project represents a significant investment for the association and is being overseen by UFIPA board member Bruno Peyroles, CEO of Bureau Vallée. The leading franchise retailer in France has already developed its own eco-labeling system and UFIPA is looking to adopt a similar A-E grading format.

Consultant Christophe Girardier has been drafted in to manage the project, and over the last 12 months he has been putting together the building blocks. One thing that was quickly realised was that this type of project could not be successfully conducted on a country-by-country basis, so the decision has been taken to expand it into a pan-European initiative. An initial European working committee meeting took place in Paris on 27 June and another meeting has been earmarked for September in Frankfurt. More details of this ambitious project will appear in the 2013 OPI Green Thinking supplement, which will be published later this year.