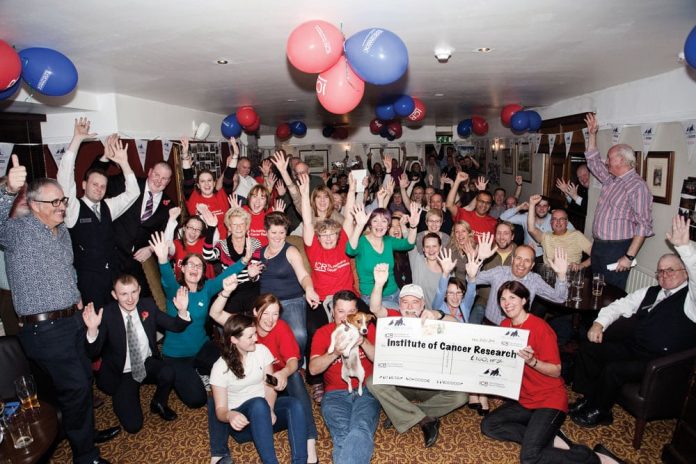 For the fifth year in a row, OPI joined over 110 members of the UK office supplies industry in the Climb of Life (COL) to raise funds for the Institute of Cancer Research (ICR – for more info, go to www.icr.ac.uk). Braving the cold and wet weather conditions in the Lake District in early November, a total of 11 teams climbed some of the highest, longest and toughest routes – many peaking at the top of High Street, one of the highest mountains in the Lakeland – in some very challenging terrain.

The result was worth every boggy boot immersion and every four-limbed scramble – a fantastic fundraising total of £100,157 ($159,000).

Everyone who took part in COL – climbers, organisers and the myriad of support staff – was amazed by the final total, jumping nearly £20,000 from last year’s record achievement of £81,000. Every team member worked hard to raise that bit more this year and the combined total was something of a (very pleasant) shock, even for event organiser Graeme Chapman MBE, who said: “I was amazed that we had reached £100,000. I didn’t believe my calculator, so checked it three times!”

Vasanta were once again the top corporate fundraiser raising a total of £25,000. Its support of the event involved the whole Vasanta board that travelled to the Lake District to join COL. The OPI team meanwhile, consisting of Janet Bell, Steve Hilleard, India Pride and Heike Dieckmann, raised over £18,000 and would sincerely like to thank all its readers that supported the initiative .

CEO Steve Hilleard said: “The OPI team is proud to have been involved in such a worthy cause, and to have been a significant contributor to the amazing overall sum raised. Having recently lost former colleagues to cancer, our commitment to efforts like the Climb of Life, and our partnership with City of Hope, remain steadfast and we are extremely grateful to all those individuals and companies who dug deep once again this year to support our passion.”

As in the last seven years, the beneficiary of the funds – the ICR – played a very hands-on role, with four members of the ICR joining the climb. Among them was Dr Udai Banerji, Team Leader for the Clinical Pharmacology & Trials team who, after the climb, gave an impassioned speech about the ICR’s recent research and the importance of these funds.

He said: “The ICR’s mission is to make the discoveries that defeat cancer. Our aim is to create more and better drugs for cancer patients. We work on all drug targets for all cancer types, including challenging diseases such as children’s cancers, pancreatic, brain and lung cancers.

“Our scientists and clinicians are working daily to make a real impact on the lives of people with cancer. We are only able to do this with the generous help of our loyal supporters. So we would like to thank all the COL participants, and all of their sponsors and supporters, for making a real difference in people’s lives.”

The final word goes to Chapman: “From £60,000 [raised] five years ago, £100,000 did not seem a realistic target, but we have made it. Thanks to everyone that takes part with such amazing enthusiasm, from relatively small contributors to Vasanta and OPI that have helped to really raise the bar. The lesson has to be to never put a ceiling on your ambition.”

The next Climb of Life will take place on 6 November 2015.