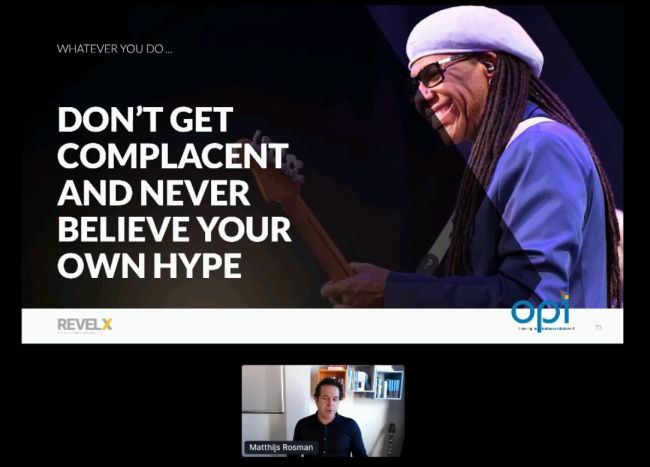 Following on from Day 1, the second and final day of OPI’s reformatted European Forum again witnessed strong levels of participation and engagement from business products executives from throughout Europe and beyond.

After a warm-up networking session and a brief Day 2 introduction from OPI CEO Steve Hilleard, it was the turn of author and business consultant Matthijs Rosman to deliver a fascinating and thought-provoking presentation on disruption, advising delegates to “decode and recode” their businesses in times of great upheaval.

He gave eight indicators of when an industry might be ripe for disruption and, judging by some of the comments in the online chat feature, many of these resonated with the audience, for example: commoditisation of assets or industries, underutilised assets, lack of transparency, low or no added value, ‘platformisation’ (eg, marketplaces), and serious user pain points.

Expanding on some possible courses of action during the roundtable session that followed, Rosman said that the work-from-home (WFH) trend has presented a tremendous opportunity to reach more customers than ever before. One of the participants – from the vendor channel – lamented that, so far, there hasn’t been enough collaboration between different channel stakeholders to really take advantage of WFH and the move to a hybrid workplace.

Indeed, the idea of partnership, making tactical choices about who to work with – even if it’s just a short-term solution to an immediate need – was a theme that cropped up a number of times during the two-day event. There was plenty of food for thought for the OPI editorial team too, and we’ll be bringing you content inspired by the presentations, delegate reactions and other Forum input over the coming weeks and months both online and in print.

Finally, OPI would like to extend its thanks and appreciation to all those who attended, presented and took part, without whom the European Forum Online would not have been such a great success.

Reminder: EOPA entries due by 20 December