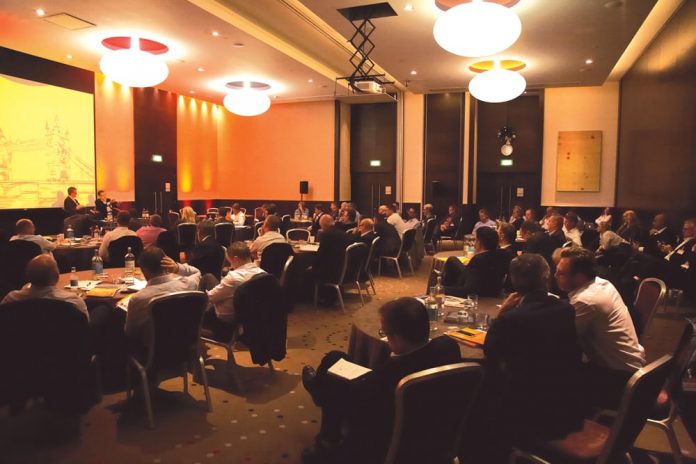 Over 80 leading members of the European OP community gathered in London for the 2015 OPI European Forum.

On the eve of the event, delegates met for a relaxed drinks reception and dinner before an early start the following morning for a full day of presentations and roundtables, all moderated by EVO Group CEO Robert Baldrey.

As in previous years, OPI is unable to report on specifics from the Forum due to Chatham House rules, but suffice to say the theme this year revolved heavily around technology and the significant impact it is exerting on office products businesses.

Unsurprisingly, another big, and very timely, talking point – in one of the roundtable sessions as well as during the numerous networking opportunities that the event provided – was the outcome of the much-anticipated Staples/Office Depot FTC decision.

The Forum kicked off with an illuminating keynote on upcoming digital technology trends from WIRED’s Greg Williams who talked about some of the key trends that businesses will have to deal with shortly. The advent of robots, virtual reality, an on-demand economy, Bitcoin and the ‘Internet of Things’ are just a few of these.

Even the humble catalogue is not immune to digitisation as a lively panel debate on the death of the catalogue – featuring Euroffice’s Simon Drakeford, Bruneau’s Nicolas Potier, PBS Holding’s Richard Scharmann and edding’s Thorsten Streppelhoff – demonstrated.

Other sessions during the day included an update on 3D printing and the opportunity it holds for OP dealers and the business supplies sector, as well as an in-depth look at pricing models and pricing dynamics.

Data – or lack thereof – is always a hot topic and before the popular roundtable sessions began in the afternoon, delegates shared some innovative ideas in trying to find a way to solve the issue of how data can be used and shared for the benefit of everyone. The consensus was that a solution would only be found if the entire supply chain worked together.

As usual, the first day concluded with a Big Interview conducted by OPI CEO Steve Hilleard. This year, the interviewee under the spotlight was ADVEO COO Jean-Yves Sebaoun, who provided interesting insights into the European wholesale market, the move into new product categories, and a glimpse into the future of ADVEO’s business.

After a spectacular evening on London’s Tower Bridge, delegates reconvened the next day for a couple of power presentations – much needed early in the morning – on content marketing and workplace transformation. The interactive feel of the second day concluded with a panel discussion about the core takeaways of the fifth European Forum. These can be broken down into five key points: using technology to future-proof your business, simplification, diversification, consolidation and finally the rather intriguing ‘something else’.