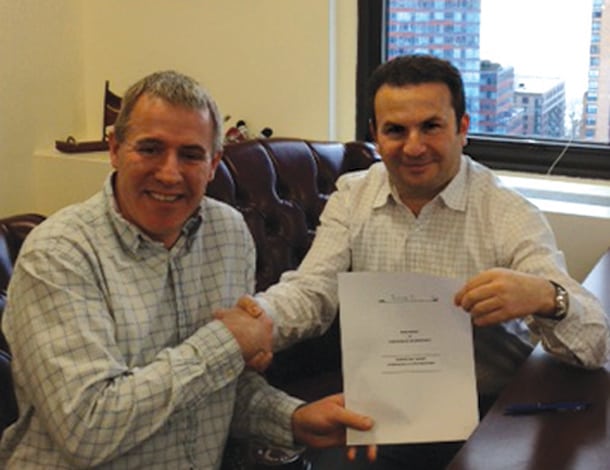 The news that Shoplet has decided to enter the UK office supplies market probably wasn’t a major surprise to most – in a Big Interview with OPI over three years ago, the e-tailer’s CEO Tony Ellison pointed to the UK as a likely destination for international expansion.

The timing – with the UK economy still in the doldrums – may have caught a few people unawares, but it is certainly a reflection of the entrepreneurial spirit of Ellison and current Spicers CEO Alan Ball.

The whole thing has come together in a surprisingly short time following a meeting at the OPI Global Forum in Chicago last May. Ball said just two further meetings in four months were needed before the agreement was signed.

Ellison called the initiative “a meeting of minds”, with Spicers being e-tail ready, understanding Shoplet’s requirements and understanding how the market is shifting from offline to online.

He confirmed that the UK was a “prime target” due to its infrastructure and its dual wholesaler model, similar to that in the US. However, he was fully aware that it would not necessarily be a question of just lifting the Shoplet model and plonking it in the UK. “We are coming in with open eyes and an open mind to see what works and what doesn’t. I don’t think that all markets are equal and I’m sure we will learn a few things.”

That said, there are aspects of the Shoplet model which will underpin its go-to-market strategy in the UK. The company has developed sophisticated mobile and online e-procurement tools, has a fanatical focus on customer service and leads the way in its use of social media to build its brand and drive sales. Ellison said building the Shoplet brand in the UK was of “paramount importance”

The Shoplet CEO also believes that he will be able to leverage existing relationships in different parts of the Shoplet ‘eco-system’, whether at the front end with major players such as Google, or on the product side with manufacturers that Shoplet works with in the US.

Of course, Shoplet still faces challenges. When it was founded 18 years ago, it had a first-mover advantage in an untapped market and has steadily built up its brand name and reputation. It won’t have that luxury in the UK where there are well-established players such as Viking, Staples, Euroffice and Monkey, not to mention Amazon and the hundreds of online resellers vying for the same customers.

Some industry insiders have questioned the move and Shoplet’s “relatively insignificant” share of the US OP market where its sales are estimated to be over $100 million. “They will just be another player in a congested online market that will improve the choice for online buyers,” said one reseller.

Another UK dealer said Shoplet’s arrival wouldn’t be game-changing. “They come to the market with no end-user awareness and no sales volume, so will have the same challenges to build their brand as any new entrant,” he said. Others see the move as a further example of Spicers moving away from its dependence on the dealer channel.

“Time doesn’t stand still and this industry is changing,” noted Steve Harrop, Managing Director of dealer group Office Friendly (which majors with Spicers’ rival VOW). “Spicers seems to be embarking on a journey where its existence isn’t dealer dependent and, indeed, sees the industry it has supported for so long as an outdated model that needs to be chopped, squeezed and reshaped to their benefit.

“I still believe strong partnership opportunities can evolve with existing players and channels provided they heed the warnings that this move, the Amazon activity and brand reduction are giving. I’ve always believed the independent dealer channel to be nimble and flexible and maybe now is the time to prove it to a large UK wholesaler.”

The Spicers/Shoplet ticket also includes plans to expand outside the UK, firstly with Ireland and then into continental Europe. Spicers has a presence in Ireland so it makes sense to start there. There is a no-compete agreement with ADVEO on the continent in place until January 2014, but Spicers has already been exploring how that expansion could be implemented.

Of course, first things first. Shoplet will have to show it can be successful in the UK before looking farther afield.