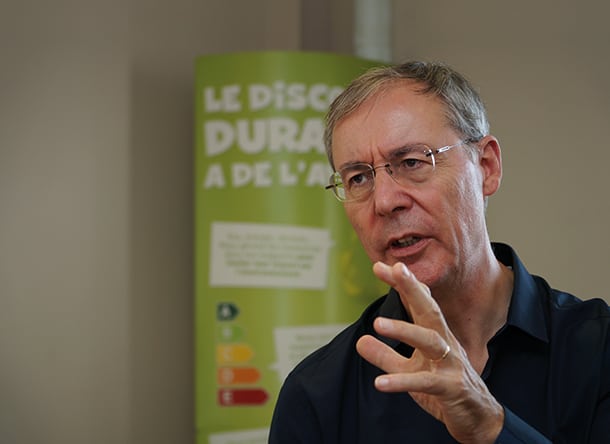 Bureau Vallée is founded on the principle of ‘sustainable discount’; even the company name and logo are a nod to the importance that founder and CEO Bruno Peyroles places on the need for humankind and nature to live together in harmony.

The France-based franchise chain was a pioneer with its product environmental labelling system introduced ten years ago. As Peyroles reveals to OPI, the system is to be updated to reflect a more mature approach to sustainable development.

OPI: A tagline of Bureau Vallée is ‘sustainable discount is part of our DNA’. Can you explain that?

Bruno Peyroles: Bureau Vallée has always had a preoccupation with the environment and that, quite simply, is something that goes back to my childhood. When I was a young boy, we used to spend holidays in the Haute Auvergne [region of France] and I would spend hours fishing for freshwater shrimps in a nearby river.

Back then, local farmers were subsidised to enrich their grass and the chemicals they used to do this found their way into the water and basically killed the river. It wasn’t done deliberately, but it showed how mankind can dominate nature and it was something that had a profound effect on me.

When I founded Bureau Vallée, my desire was to integrate sustainable development as a basic fundamental into the DNA of the company.

OPI: How did this desire first manifest itself?

BP: Bureau Vallée was founded in 1990. Two or three years later, we opened an aisle for green products. I think we must have been the first or one of the first companies in our sector to offer recycled paper and other recycled-content products.

OPI: There was already a green offer at this time?

BP: It was at an embryonic stage and there were a few manufacturers that were more advanced than others; often German companies for recycled paper, but very few French suppliers.

Still, it was symbolic, the impact on sales was very minor and customers were not at all sensitive to this issue. But it grew slowly until we introduced our environmental product labelling system about 15 years later.

OPI: Tell us more about this environmental labelling.

BP: It really started in 2006 after I organised our annual franchise meeting in French Guyana, in the middle of the virgin rainforest. There had already been a certain reluctance by some franchisees to go to such an ‘exotic’ location, especially as at the time there was a lot of talk of tropical diseases.

During a trip that we had organised up the river in canoes, I suddenly noticed that everyone was silent and not saying a word. I wondered why and realised that they were all absolutely terrified. But we carried on up the river for an hour and a half, and the magic of the forest gradually took over.

We spent four days there and we never had any problems with mosquitoes, snakes, spiders or piranhas, etc. It was then that we decided together that the environment must become an important element for Bureau Vallée. We had a secret ballot – with 90% of the network in attendance – and the vast majority said ‘yes’. Not only was it important, it also had to become a priority.

OPI: You threatened to leave them in the jungle if they didn’t vote ‘yes’?

BP: (laughs) No, we actually had the vote back at the hotel in Cayenne; it was all very democratic.

The next thing was to determine what action to take, and that was when we decided to offer our customers the ability to choose a product with a better environmental score. From that we invented our scoring system, based on the A-E visual that consumers were already familiar with from products such as electronics.

OPI: How did your suppliers respond?

BP: A lot of them thought it was a good idea and readily agreed to fill in all the questionnaires, etc. A few of them were opposed to the idea and refused to cooperate. We had to impose it upon them under the threat of withdrawing their products from our stores.

OPI: You threatened to de-list them?

BP: They didn’t think we would actually do that, but we sent out notice letters saying we were dropping them. A week later, we had their completed questionnaires back. But that was really a small minority; most suppliers, large and small, took part, and then it was a mutual learning experience as we developed the system.

For example, some suppliers would complain when they had a low score. We’d point out they had left blanks on the questionnaire and when they’d say they didn’t know the answer, we’d tell them to go and find it!

OPI: How is the scoring validated?

BP: The manufacturer contacts AFNOR [the French national organisation for standardisation] by internet, answers the questionnaire, provides proof where required and details of certifications and norms, etc. The system is efficient, it is ‘shared’ and it gives all our customers a choice to select between products that are noted between A-D. We don’t stock products that have an E score).

OPI: To what extent do customers look at environmental labelling?

BP: More and more of them do and most of them are happy that we do this and that we don’t stock products that are poorly graded. In fact, we are seeing an increasing number of proactive clients in the public sector that ask us for proof that the products they are buying are environmentally friendly. We are working on updating our systems so that invoices show the environmental grading.

In fact, we are now preparing to update the environmental scoring process itself. We are working with a new third-party organisation that will extend the criteria to include a product’s carbon footprint in the different stages of its lifecycle. It will include questions on transportation and where the product is made for example, all criteria that have an impact on carbon emissions.

It is more complicated than the current system, but we are now a bigger company and we have a more mature view of the issues and what our responsibilities should be. It’s on track to be released at the end of this year.

OPI: Is it a completely new grading system?

BP: It will be the same A-E system, but the questionnaire will evolve. More weighting will be given to the carbon footprint and less to other criteria.

What is interesting is that, with this new organisation, we are evolving towards a system that by definition is or could become a ‘community’ project. Once we have established the environmental impact of a product, everyone can have their own way of grading that, or weighting the criteria. This means we can bring together other industry participants or stakeholders that will be able to benefit from the work that has already been done.

OPI: It sounds similar to what SOFEA [Sustainable Office European Association] is trying to achieve…

BP: It was my wish that SOFEA would play that role. But after three years SOFEA is still a long way from developing a system that covers the full range of products in the marketplace.

OPI: You were closely involved in the creation of SOFEA. What happened?

BP: It’s quite straightforward. To give you a bit of background, a few years ago, the UFIPA [French office products trade association] President approached me to try and develop a system in France for the environmental labelling of products, inspired by the concept we had already introduced at Bureau Vallée.

Manufacturers said it would be preferable to do this on a European scale so that there could be a level of harmony in different markets. I devoted a lot of time and effort – including learning to speak English, or at least being able to run meetings in English – to this, working closely with Marcel Ringeard from Pilot, who was also the UFIPA President. To cut a long story short, this eventually led to the creation of SOFEA, but shortly afterwards Marcel retired from Pilot and from our industry.

Then, there suddenly appeared an executive committee at SOFEA composed entirely of manufacturers. The original concept was that the Executive Committee would be equal between vendors and resellers, if anything with a bit more weight in favour of resellers.

In my view, the operating model became complicated and slow and, more seriously, a year later SOFEA announced that it was pulling out of the European PEF [Product Environmental Footprint] project. For me that was the final straw and I no longer felt aligned to the project.

I was looking for results, but I was asking myself if it was leading, bit by bit, to the whole project being buried. Out of solidarity, I stayed for two years and we contributed financially to SOFEA, but we left at the end of 2015 and decided to take charge of our own system, to re-energise that and take it further.

OPI: Could you envisage a return to SOFEA?

BP: It’s possible, yes. But I would have to see a real commitment to action and a balance of power between vendors and resellers.

OPI: We’ve talked a lot about ‘green’ products. How do you view the wider issues of the environment and sustainable development?

BP: Last year Bureau Vallée celebrated its 25th anniversary; I was also 60 years old. It was a time for me to take a step back and reflect, and read up on a number of issues. One conclusion I came to was that global problems cannot be solved at a national level.

I believe that success in the 21st century will be achieved through organisations that transcend borders such as NGOs and private companies; even a company like Bureau Vallée can make a difference.

I think it comes down to the role of private companies in society. Yes, they are there to make money, but they can, and should, play a role in the environment and social ethics. It’s called a ‘hybrid organisation’ – that is what I hope we will become.

When I talk to our people about this – and not just younger generations – they agree that this is what they want to be a part of. But if I hadn’t said anything, they would not have acted. That’s the power of a company – to be able to put things into action.

OPI: And have you been able to do anything yet?

BP: We have started on the journey. We have hundreds of stores that are located on the edge of towns, very often near areas where young people are ‘trapped’ and not integrated into society or the labour market. Our customers are mainly small business owners who often need to recruit local people, so there is potential to work with local associations to bring these people together.

We have also recently started a partnership with a French association called Planet ADAM to help young people create their own businesses. We are using our Beev’up co-working area at our flagship store near Paris as a place where young people living in underprivileged areas can present their projects, get ideas and financial help, etc. It’s early days yet, but we’ll do things like award a prize for the best project, offer some financial incentive or give them free use of our Beev’up area. Of course, we hope these young entrepreneurs will then become loyal Bureau Vallée customers, so it’s a win-win. 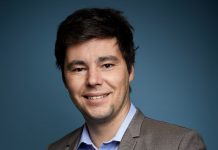