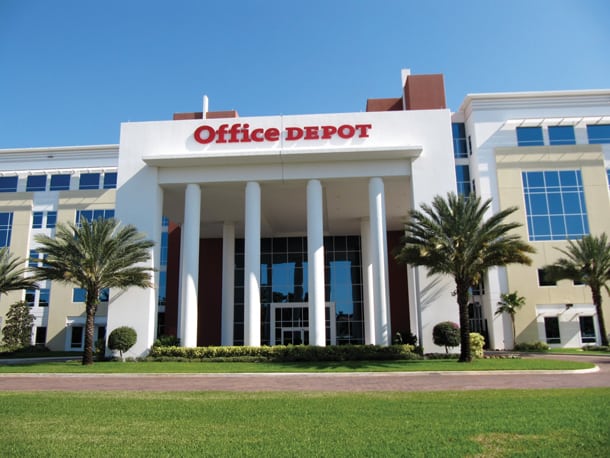 As expected, the US Federal Trade Commission (FTC) didn’t stand in the way of the proposed merger between Office Depot and OfficeMax, voting unanimously at the beginning of November to approve the $1.2 billion transaction. With the FTC decision out of the way, the closing of the deal was announced just a few days later on 5 November.

There was a bit of a limbo period with the newly merged companies lacking a permanent CEO and headquarters, although it was announced from the start that the company name would be Office Depot, and OfficeMax was now a wholly-owned subsidiary – despite continued reference to a merger of equals.

To be fair ‘Max does have equal representation on the new board of directors – but one wonders just how much of an influence these directors will have. After all, the boards of both Office Depot and OfficeMax have been accused of impotence to varying degrees over the past few years.

Since mid-November, however, a number of key decisions have been taken. The first was the appointment of Roland Smith, the former CEO of supermarket group Delhaize America, as Chairman and CEO. Smith comes with something of a reputation as a turnaround and integration expert from his time at Delhaize, the Wendy’s restaurant group, American Golf Corporation and bowling centre operator AMF. The 59-year-old only took on the CEO role at $18 billion Delhaize America in November 2012, but implemented a number of major changes at the group’s Food Lion chain – including closing underperforming stores and reducing corporate overheads – and sold off its Sweetbay, Harveys and Reid’s supermarkets to Bi-Lo.

Smith wasted no time bringing in a new CFO, former AMF, Arby’s and Wendy’s colleague Steve Hare, as the first confirmed member of his senior management team, although this appointment was greeted with surprise in some quarters as it meant the retirement of Office Depot’s CFO Mike Newman.

“We viewed Mr Newman as highly qualified, and the most important executive at the company during the transition period,” said Janney analyst David Strasser in a client note. “We have known him for years, and have always thought of him as a strong CFO with strong operational and financial skills.” However, the CFO appointment clearly shows that Smith is not afraid to make tough decisions, something he is likely to have to do frequently in the coming months.

The full line-up of the new executive team Charishould be known by the end of this month. Once this management team is in place – and with the headquarters decision now taken – the integration process will begin in earnest in January.

And that’s when the huge challenge of bringing together two former fierce competitors will really start.