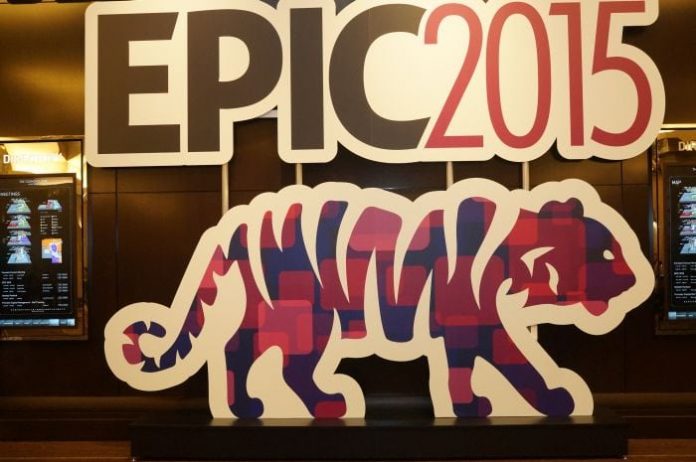 Independent dealers at the EPIC event in Las Vegas were once again told to focus on combatting the threat of competitors such as Staples and Amazon and to better collaborate with each other.

This has been a message heard regularly over the years, but two recent joint initiatives from Independent Stationers and TriMega are taking cooperation in the independent dealer community (IDC) to the next level.

At yesterday’s General Session, both the EPIC Business Essentials national accounts joint venture and an effort to provide better e-content for the IDC were heavily featured in front of a packed audience at The Cosmopolitan in Las Vegas.

In fact, there was a record turnout at this year’s EPIC with more than 400 dealerships and 150 suppliers represented and a total attendance in excess of 1,400.

Essendant CEO Bob Aiken made a brief address to delegates in order to introduce himself to the wider IDC. He then stayed on the Essendant booth during the day’s expo chatting to dealers, and this was something that was certainly appreciated.

Keynote speaker Peter Sheahan had a message that resonated with the audience: don’t try to compete on volume and price, but focus on your strengths and be the best in your niche area.

The expo itself was busy and the foot traffic was strong throughout the day – definitely one of the better conference trade shows that I have attended – and dealer engagement and interest was high.

There was also a strong turnout for the EPIC finale, billed as a ‘Game Night’, that featured a prize-drawing reception, fun and games with the ‘Minute to Win It’ contest, and one lucky dealer walking home with $5,000 in cash.

Finally, just a quick note of congratulations to New York dealer Jordan Kudler and his long-time partner Cindy – they tied the knot in Vegas straight after the show!