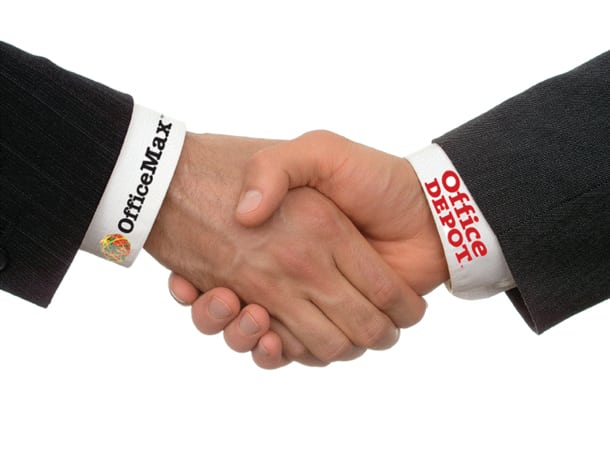 The announcement of their merger didn’t go according to plan – webcast provider Thomson Reuters inadvertently issued a press release ahead of schedule – and the whispering going on behind the scenes during the webcast suggested they weren’t as well prepared as they might have been, but Office Depot and OfficeMax have finally agreed to tie the knot after years of speculation.

As is the case with these types of announcements, the two companies bent over backwards to highlight the benefits of bringing together two multibillion dollar firms, but in this instance it did seem to go a bit too far with CEOs Neil Austrian and Ravi Saligram talking of their personal chemistry and mutual love of Italian food; and claiming that the two sets of management teams share identical cultures (cynics would probably quip that they do share a common culture of cost cutting and falling sales!).

Great steps were also taken to stress that this is a merger of equals, despite some major news channels still saying that Office Depot is acquiring OfficeMax, and an Office Depot regulatory filing stating that OfficeMax would become a wholly-owned subsidiary of the company. On paper, the combined company isn’t actually equal. If Depot investor BC Partners redeems its preferred shares in full, then the new entity will be 54% Office Depot and 46% OfficeMax. Should BC Partners decide to keep a 5% stake – which it has said it might do – that gives a shareholding of 51% Office Depot, 44% OfficeMax and 5% BC Partners.

Depot and ‘Max will have equal representation on the board of the combined company. Although that might seem fair, will it create the right conditions for swift and objective decision making? There are also a number of major unanswered questions surrounding the new company; we know nothing about the name, its location, its management team or CEO. A selection committee will begin the CEO search, but he/she will not be named until just before or after the transaction is closed. Both Austrian and Saligram will be considered, as will external candidates.

Furthermore, the identified synergies do not include anything to do with the key question of retail, a major reason for the two companies coming together in the first place.

Any talk of retail consolidation was strictly off limits during the merger conference call and this will be something to be discussed once the transaction has closed.

Not that the deal is a certainty. Although Austrian said that it was “highly unlikely” that the Federal Trade Commission (FTC) would block the transaction, it is expected to take until the end of the year before approval is given.

Until then, Depot and ‘Max will have to go on competing with each other, which is certainly not an ideal situation for those involved. However, as we saw last year when the FTC blocked 3M’s proposed acquisition of Avery, they have little choice.

It will also be a question of wait and see for other stakeholders. Certainly, for the two national US wholesalers there is a lot at stake. Perhaps United’s strong relationship with Staples could tip the balance in favour of SP Richards in the event of a combined Depot/‘Max?

Lyreco will also be interested in the outcome as the merger will undoubtedly signal an end to its global contracts alliance with OfficeMax. Lyreco CEO Steve Law declined to comment on the issue, but it seems likely that steps to find a replacement with national coverage in the US have already begun. AOPD and HiTouch are two names that spring to mind as potential candidates.

In the vendor community, Newell Rubbermaid’s CEO Mike Polk claimed that the merger wouldn’t have a great impact on his firm’s sales. While he admitted that there would probably be some difficulties to deal with as two distribution networks come together, he maintained that this was “not a strategic issue” for Newell and that the merger would be a “non-issue” for the manufacturer.

One stakeholder that is not playing a waiting game is activist Office Depot shareholder Starboard. It has already put forward six candidates as it looks to revamp the Depot board of directors ahead of the search for a post-merger CEO.

The two firms will combine in a share transaction that will see OfficeMax common shareholders receive 2.69 Office Depot shares for each OfficeMax share they own.

Pro forma annual sales of the combined companies at the end of 2012 were $18 billion, $14 billion in North America.

The deal still needs all the usual regulatory approvals and to be approved by the Depot and ‘Max shareholders. With a forecast closing date of no later than 31 December 2013, it would appear that anti-competition approvals are not being regarded as a formality.

The board of the newly-formed company will be evenly split between representatives of Depot and ‘Max.

The combined company’s name, marketing brands and corporate headquarters location are expected to be determined following the appointment of the CEO.

Annual synergies of $400-$600 million (excluding any retail synergies) are expected to be achieved by the third year following the merger.

‘Max shareholders will receive a special dividend of up to $131 million prior to the transaction closing.

Major Depot shareholder BC Partners has agreed to vote in favour of the merger.

OPI asked leading US office products figures to comment on the news of the merger. Here are some of the responses we received.

“There will be tremendous opportunity for increased market share for independents in the SMB space by two weak links becoming a larger, weaker entity lacking proven industry experience. Independents will benefit because of their ability to capture the moment by attracting and recruiting talent, entering new product categories more efficiently and capitalising on the buy local theme.”Mike Gentile, Independent Stationers

“If the merger goes ahead I think it will be great from a competitive standpoint. For us we will be the third largest national company and the fourth largest in the industry, which makes bidding on business good for us. The merger of the two companies will allow us to hire seasoned professionals in which there is duplication, and it will be very disruptive to [Depot and ‘Max] customers, which we should benefit from.”Michael Brown, HiTouch Business Services

“I think the industry will have a very strong player in the new combined company, and Staples will have a fight on its hands. In the short term, Staples and independent dealers have the most to gain; there is always a bit of chaos after a transaction and assimilation of this magnitude, so competitors will capitalise on the chance to take advantage of the disorganisation, particularly on the delivery side. But in the end, ‘Max and Depot have the most to gain.”Vince Thomson, IdeaStream Consumer Products

“Assuming the merger goes through, it will pose a significant impact to the wholesalers, as one of the two will likely lose $300 million plus in volume. Additionally, manufacturers stand to lose volume depending on which side of the trade they land on with respect to category decisions, exclusivity agreements, etc. I’d be surprised if the institutional money behind this combination is going to want current leadership to handle the integration and ongoing need for growth, as their respective teams have done nothing other than cut expenses as their results diminished on a quarter after quarter basis. Someone with extraordinary integration talent and a meaningful recipe for growth is going to need to be attracted by the new board to lead this combined entity.” Ted Walter, Complete Office California 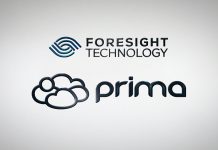