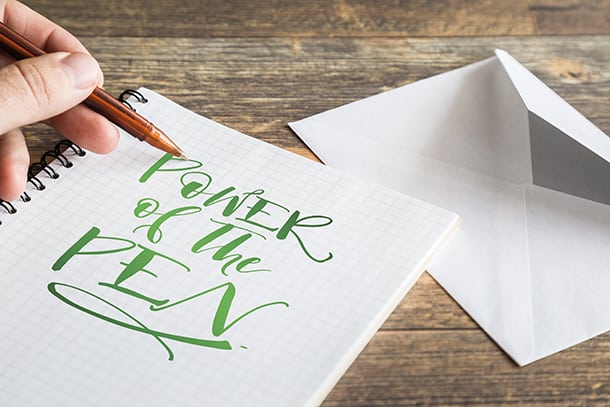 Speak to some of the biggest players in the writing instruments sector about the current state of the market and you get a very mixed response.

Pentel UK reports a positive annual performance, with a slight decline in retail sales offset by a modest resurgence in the commercial OP market. UK wholesaler VOW, meanwhile, saw 7% growth across the whole category in 2017, with sales of branded pens (+11%) and value bulk packs (+18%) outperforming the rest of the sector.

However, the signs from continental Europe are not as positive. Following several years of growth, German manufacturer Schneider Pen has seen a sharp sector reversal and says that, at best, sales in the market have been flat over the past 12 months. It’s a similar story at RKV – Sweden’s largest office supplies dealer group – which acknowledges that it has seen little, if any, growth in the past year.

Across the Atlantic in New Jersey, US, manufacturer Zebra Pen also reports flat sales in this category. Interestingly, despite considerable online competition, US consumers are still making 70% of their writing instruments purchases from retail outlets.

Different sub-segments within the broad writing instruments category are performing better than others. For Pentel, the strongest sellers are rollerballs, mechanical pencils and markers. “In this latter group, 2018 will see the company introducing two products,” says Wendy Vickery, Marketing Director at Pentel UK. “The N50XL is a jumbo permanent marker with a large chisel tip, ideal for use on posters, notices and other large surfaces. Its smaller cousin, the N50S, is a new fine bullet-tipped permanent marker which is suitable for use where space is limited.

“Coloured inks also remain popular for specific uses, such as marking and proofing. We continue to be told by the education sector that both teachers and students are marking and editing their own work in a variety of colours. This will help fuel demand for products in this area.”

Stefan Sonesson, Managing Director at RKV, points to specific highlights in an otherwise declining category as well: “For us, the product group overall is in retreat, with pencils, in particular, in sharp decline. However, sales of the Pilot FriXion range have been very good on the back of a strong marketing campaign and overall, I’m more positive about the sector’s prospects in 2018.”

Schneider Pen’s most important product group is ballpoint pens, with its Slider series proving particularly popular. The 2017 launch of the Slider Xite made of bio-based plastic has been a hit with the environmentally-conscious. Also, says the company’s Head of Public Relations, Martina Schneider, “whereas ballpoints tend to be the pen of choice for industrial needs, we are also seeing 10%+ growth rates for our school products, thanks to the launch of our new Link-It fineliners and fibrepens and our new fountain pen ‘Ray’.”

One aspect of the market that everyone agrees on is that the adult colouring craze has now largely run its course. Schneider Pen cites it as the main reason for the lack of growth in the writing category in 2017.

That said, Jill Strutt, Traditional Category Product Manager at VOW, reveals it has definitely had a positive knock-on effect: “This craze reached its peak a few years ago, but we’ve found that it triggered awareness of the multiple colours available in fineliners. Consequently, we continue to see growth in their sales as consumers are now using these pens for everyday use.”

And new trends are beginning to take effect too, says Vickery: “So the adult colouring market is in decline after reaching saturation point, but new opportunities have emerged, especially in the creative sector. The colouring of Mandala patterns – Hindu/Buddhist circular spiritual designs – is extremely popular. Also, ‘journalling’ is offering a fresh direction for end users. This is the keeping of a diary detailing your innermost feelings, used as a method of stress management or to help you achieve work/life goals. This new activity cries out for coloured inks to help differentiate and identify your thoughts, ideas and plans.”

Zebra Pen’s Director of Marketing Ken Newman agrees: “The new focus on writing as a creative outlet is represented by journalling, bullet journalling (a blend of ‘to-do’ list, planner and diary) and lettering or calligraphy. Writing is becoming more of an art form these days. It’s almost as though people are rebelling against technology in order to regain and express their individuality.”

This bullet journal concept is having a big impact, according to Sabrina Hamann-Gleißner, International Sales Manager at German manufacturer Stabilo: “A simple notebook is transformed into a customised life planner. There are no rules, it’s down to you what you decide to put in it, with the content arranged, structured and shaped in whatever way suits your creative mind.”

Vickery picks up on the same theme: “The demise of the pen is not on the horizon. In fact, there’s a potential backlash against the dehumanising effect of technology overload from an unexpected audience. We’re hearing rumblings about young people keen to put down their smartphones and pick up a pen to write letters, notes and messages to loved ones, friends and colleagues. This is driven by a desire to express their personalities and stand out from the anonymous tech crowd.

“Wishful thinking? Misty-eyed nostalgia? Perhaps. But, as we’ve said all along, there is a place for traditional and new technologies to co-exist and complement each other quite successfully. To witness this renewed interest in ‘old technology’, look no further than the fountain pen market, which continues to experience a renaissance few would have predicted.”

Indeed, in this increasingly digital world, there are signs that handwriting is becoming fashionable again. Many businesses are now realising that a personal handwritten note can set the sender apart and illustrate a genuine appreciation for the recipient.

But we don’t all have fantastic handwriting. Sending lots of individual notes also takes time. US company Bond helps businesses send personalised, handwritten notes at scale. Essentially, you tell Bond electronically what you want to say and to whom and one of its ‘writing robot’ machines scripts your message with a real pen and even mails it in a handwritten envelope on your behalf.

As CEO Sonny Caberwal says, email is all about the sender whereas a note is about the recipient. “A well thought-out card or letter will almost always be read and carries a stronger sentimental value,” he says. “By giving a customer something that won’t go unnoticed and something they can keep, businesses can spark interest and build loyalty.

“There are strategic times when a personal note to the consumer can significantly impact retention, particularly if a customer seems to be slipping away. Whether it’s thanking them for a repeat purchase, or for simply being a customer, it builds excitement and applauds their loyalty, driving customer satisfaction.”

Product development and new services show that innovation in the writing instruments sector is evidently not dead. As Vickery sums up: “While it might be tempting to think that there is only so much that can be done with a pen, experience proves otherwise.”