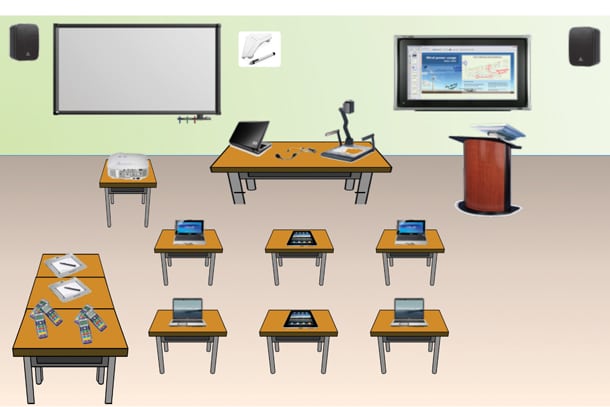 Sales of interactive whiteboards and interactive flat panel displays in the education and corporate sectors grew 15% year on year in 2012, but the latest market figures highlight some intriguing patterns.

A study from Futuresource Consulting found that nearly one million products of this type were sold, with particularly strong growth in Europe, the Middle East and Africa (EMEA) and Asia, but there were volume declines in the US.

The market research firm, which has a global remit, said that Asia experienced its best ever year in terms of interactive whiteboard sales and display boards with 70% annual growth, although India drove sales with more than a 100% increase. Futuresource said that it expects “huge education tenders” to continue in Asia in the immediate future.

EMEA had its largest year of sales too, achieving 24% annual growth, with revenues in Russia almost doubling compared to 2011.

Johannes Peter Martin, Group Managing Director at German multichannel reseller Kaut-Bullinger, says that prices of interactive whiteboards and interactive LCD/TV equipment are coming down, which is making this type of technology more attractive to different markets.

Martin adds, however, that attitudes must change if interactive visual communications technology is to truly penetrate the German educational market, suggesting there’s still plenty of demand for traditional communication items in this part of Europe.

“The use of interactive products is a very narrow part of teaching,” he explains. “How the syllabus is taught is up to the teacher, and many educators are currently afraid of new media. We have experienced that newly acquired interactive boards are only used as projection screens – and not interactively.”

In the UK, meanwhile, sales of interactive boards jumped 7% year on year, which was the first annual increase since the 2005 peak.

For OP dealers and resellers looking to invest in this category, the market trend according to the research is that interactive flat panel displays are starting to take share from interactive whiteboards. Additionally, some of the first replacement boards have now been purchased, with school customers tending to buy the same brands as they had before.

Indicating potential demand in the UK, Futuresource says that there is still significant new school construction in the pipeline due to the rise of academies, as well as substantial rebuilding programmes within existing schools.

While sales patterns in the aforementioned regions are encouraging for the companies operating in the technological visual communications market, Futuresource has found that there are a number of factors stunting growth in the US.

Volumes were reportedly down 27% on 2011 and slowing demand in the education market is expected to continue in the next few years. The research suggested that a saturation point is close in the US and that by the end of 2013 almost half of K-12 classrooms will have an interactive display, with early models sold not yet ready for replacement.

Like many other categories in the business supplies world, the rise of tablet devices is also having a major impact. Just as the PC and the paper industries have been affected by the exponential growth of tablet usage in the office and at home, so too is the category that, until recently, was viewed as the innovative communication method in the corporate and education sectors.

Janet Collins, President of Ghent Visual Communication Products, which does not manufacturer interactive whiteboards, suggests that they “are fairly limited in their application” compared to tablet or smartphone functionality.

“I can envision tablets interacting with flat screen monitors for classroom or work discussions, as opposed to using the technology imbedded in the specific application of a whiteboard,” she adds.

“One of our sister companies, WoodWare, is growing rapidly, offering technology support furniture, specifically tablet-charging carts for schools. I believe the OP community can find other ways, like this, to support rather than compete with these new technologies.”

Futuresource reported that more than three million tablets were purchased by schools around the globe in 2012.

Initiatives such as Tablets for Schools, which aims to promote the device as a platform for education and learning, are also gaining some momentum.

Writing on the Tablets for Schools blog at the end of April, James commented: “Across the world, the possibilities for using tablet devices to enhance education have been multiplying geometrically.

“An avalanche of ideas, software, commercial providers, schools, virtual academies – you name it – has sprung up to explore this change, either for commercial gain, or out of a spirited and benevolent wish to make the world a better place.

“We think that there is a job to be done in taking this magnificent and exuberant upwelling of ideas and making sense of it.”

It’s difficult to argue against the initiative as a noble cause, but if it gains further traction then it will clearly get schools thinking more about their technology budgets and where to direct their spend.

Tony Ellison, CEO of US-based office supplies e-tailer Shoplet, says that, from his experience, the visual communications category is increasingly becoming digitalised – and he expects the market to continue moving in this direction.

Futuresource said that the scale of the corporate space “presents a number of viable opportunities” and has more potential than the school classroom market. This prediction tallies with that of Kaut-Bullinger’s Martin, who suggests that “rigid teaching methods” in Germany will mean investment in interactive display equipment is more likely to take place in the country’s B2B sector.

Futuresource foresees that sales of interactive boards and related equipment will rise by 30% by 2017, with growth predicted to be driven by developed markets such as the US, the UK, Germany and Sweden.

It forecasts that the global display technologies market of interactive whiteboards, interactive flat panels and interactive projectors is set to reach 1.16 million devices by 2017. There are evidently plenty of opportunities for companies operating in the sector, although it seems there will be quite stark differences region by region.

“While some countries are embracing technology such as interactive solutions, many still prefer traditional tools such as whiteboards and easels. Therefore, maintaining a breadth of range has become the key attribute of any global company willing to abandon the ‘one size fits all’ philosophy. There has also been an unfortunate increase in Asian ‘me-too’ products that lack individuality or design. Our customers continually demand USPs and style which is driving our strategy of innovative product development.” Graeme Gladwinfield, Marketing Director, Bi-silque

“Everyone in the vis-coms category appears to be struggling to find a new position in the market. Prices are being driven down by little differentiation, oversupply, new entrants, cheap imports and an outdated, expensive distribution system that is ripe for change. Manufacturers need to make a choice – swim upstream to more innovation, design and quality, or build operational excellence and be a low price leader. Too many in this industry are grasping by trying to play at both ends and will struggle.” Janet Collins, President, Ghent Visual Communication Products