Office Depot has had a Q3 to forget with business taking a massive dent from slow sales and tropical storms. How quickly can it respond?

Office Depot could do with a breather. A rough month has left the power player winded in more ways the one. In a quarter already choked by sluggish revenue across its whole business, the forces of nature in the shape of a clutch of tropical storms also conspired to hit business on its home turf of Florida.

The bad run saw Depot issue a revised sales and earnings outlook for Q3 on 14 September. And it wasn’t pretty. In North America, its troublesome retail comp sales were "weaker than expected" while the firm’s business services group, contract and commercial sales, produced lower than expected sales growth. In Europe it was a similarly grisly tale with August’s typically softer sales proving to be "notably below expectations" in catalogue operations and the Guilbert contract business.

The news about Guilbert was particularly worrying, causing the company to admit that the business had "not yet generated the revenue lift expected at the time of the acquisition" and adding that it "continues to show negative year-over-year sales results".

A generally disappointing back-to-school season for the North American retail community as a whole was also a blow to Depot. In the face of such a stuttering quarter, the last thing the company needed was forces out of its control to compound matters. However, the slings and arrows of outrageous fortune came in the shape of tropical storms which tore into the Florida Panhandle. There is obviously never a good time for this kind of natural disaster to happen but if there was a quarter when Depot could have most done without it, this was probably the one.

The effect of Hurricanes Charley, Frances and Ivan and Tropical Storm Gaston produced unexpected costs and lost sales. Depot has just over 90 retail locations in Florida, representing around ten per cent of its retail business.

According to Buckingham Research, some of these stores were impacted by Hurricane Frances for four days, resulting in some closures, staff shortages and loss of power. The effect of such storms is even worse on an OP retailer such as Depot as there is no positive business impact from the storms, aside from some increased sales of its hurricane-related products – batteries and water.

In comparison, general stores such as Wal-Mart and Home Depot are cushioned by such events as they often do a great deal of business with people stocking up on goods in preparation for the storms and then buying cleanup supplies afterwards. Indeed, in a September sales update, Wal-Mart said it expected the hurricanes to be "mildly accretive to sales". Depot’s mood over its Q3 performance is unlikely to be any further improved by rival Staples’ posting of another set of record results in its latest quarter.

Among the Q3 debris, CEO Bruce Nelson outlined the route back on course for Depot. These include rebuilding the Guilbert sales force, the roll-out of its new M2 retail store format in North America and "a number of significant cost-saving, productivity and efficiency initiatives" in late 2004.

Buckingham Research’s Dan Binder says: "This was not an ad hoc announcement in reaction to the miss in the quarter, but apparently one that would have been made regardless after several months of comprehensive review and planning. We believe these cuts will come from many areas including greater marketing effectiveness, a shift toward more part-time labour, systemic improvements allowing for greater efficiency and other smaller improvements throughout the organisation."

The new initiatives outlined by Nelson to grow Depot business will be closely watched by all interested parties over the coming months and the hope must be that they can put this Q3 behind them. 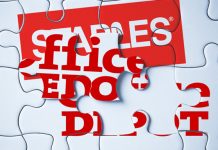