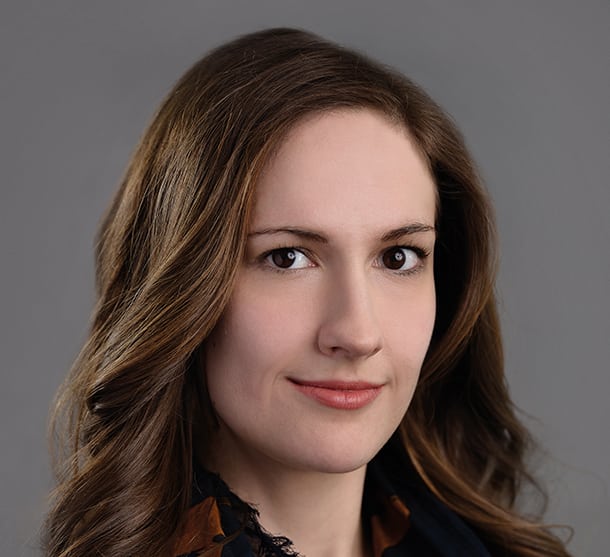 Describe yourself in one sentence.

I don’t like to sit still, physically or mentally.

What’s your most prized possession?

If I had to pick something, it would be the first edition of Toni Morrison’s Beloved that I scored for $3 some years ago. Honestly though, while I like things as much as the next person, the excitement of owning something tends to wane for me. I suppose memories are more important to me than physical items, and when I have money to spend and time available, I would always prefer to spend it on travel.

It varies. Right now, it’s John Steinbeck — I love his simple, clean descriptions and rich subtext, though JRR Tolkien is growing on me.

Where is your favourite place to go in the US?

My parents’ second home in Breckenridge, Colorado, where there’s always a glass of wine, a pretty view and a small dog waiting to snuggle up with you.

What was your last online search?

How to house train a puppy while working full time.

Airbnb.Granted, it’s not a physical gadget, but it has an app so that’s close enough. Some of the best places I’ve stayed in — a tiny one-bedroom apartment off the Shuk in Jerusalem (Israel), a student’s studio in Södermalm (Sweden), a cabin in West Virginia (US) — were found through the lovely hosts on Airbnb.

“I’m proud of you, not just as my daughter, but as a professional.” I know it exactly, because I wrote it on a Post-it Note and taped it to my desk.

Since I started working with my father [Dave Guernsey], he hasn’t talked about being proud of me as much as when I was a kid, so I really treasured hearing that (it could be because I’m a disappointment now, of course, but let’s hope not).

Indian food, specifically takeouts. Between board meetings, work and my MBA programme, I live on burritos and avocados, so takeaways really elevate things.

What words do you use the most?

If you could have the answer to any question, what would you ask?

What happens to our souls after we die?

What was the last gift you gave someone?

A toothbrush and toothpaste for my stepmother, and a comb and sewing kit for my father, all courtesy of the Cordis hotel in Hong Kong. If a hotel had nice soap, lotion, etc, we’d always grab extras when I was travelling with my parents as a kid.

I don’t see one person being capable of leading all the world’s populace — there are too many divergent cultures that need different leadership styles. If individual companies and industries need independent types of leaders for their varying cultures, how could we expect a single person to lead all of humanity?

What is humankind’s greatest invention?

Capitalism. Everything else that I might suggest — the Gutenberg press, penicillin, Microsoft Excel — sprang from our drive to achieve great things and be rewarded accordingly.

As VP Marketing & Merchandising at Guernsey, I have the privilege of working with a great team of designers, coders, purchasers and operations gurus.

If you weren’t doing your present job, what would you like to be doing?

I’d either be in management consulting, learning from different industries with every new contract, or working in experiential design. By the latter I mean that I’m fascinated by the crossroads between transactional business and experience.

The work done building experiences of a brand through pop-up shops, but also by high-end hotels, luxury retailers and even amusement parks really excites me.

The industry figure you most admire?

Shelley deSilva from The HON Company. She’s retired now, but I’m impressed not only by her team’s marketing and design work, which pushes the boundaries in our industry, but also with the way she carries herself.

Your best piece of advice to someone who has just joined the OP industry?

This isn’t the whole world! Keep your eyes open, watch what other industries do and if you see something innovative that you can apply here, push for it.

If you could change one thing about the industry, what would it be?

I would make it eager and hungry for innovation, and fearless when faced with it.

Savannah Guernsey - 10 September 2021
OPI speaks with AOPD Executive Director Mark Leazer about the state of the national accounts business in the US. With 68 independent dealer members throughout...