Industry feedback from Paperworld USA and Paperworld China was similar, but markedly different. Exhibitors and visitors at both events spoke positively of the varying national make-up of visitors, remarked on the sometimes slow traffic, and debated at length the extent to which their investment in the event had paid off.

But while the masses at Paperworld USA felt the show’s outlook was at this stage unclear, Paperworld’s Asian counterpart, which took place between 15-17 November, seemed to enjoy a heady injection of hope and expectation for its potential. But then, with sourcing opportunities abound and China’s retail sector burgeoning, this comes perhaps as little surprise.

Rob Nirsimloo, director and general manager of UK exhibitor Multichem, told OPI+: "The potential is there and my personal feeling is that Frankfurt is steadily declining. The high cost of exhibiting in Frankfurt (travel, accommodation and booth space) is something that is constantly pointed out to me by Asian customers. I can see that Paperworld China could become THE Paperworld exhibition in the next five years."

Better Tsui from Chinese exhibitor Oma Office Equipment added: "I think it was the most successful fair held by an overseas professional fair company that I have ever seen. It is well known that China has become the world’s workshop, so Chinese suppliers would like to go abroad to show off their latest items. Owing to the small stands and limited platform at Paperworld Frankfurt, Paperworld China offers suppliers a broader platform and helps them realise their dreams of stepping out to the West."

Out of the 22 per cent of exhibitors and the 22 per cent of buyers that came from outside China, the countries of Taiwan, India and Korea were among the top five. Those present claimed the event was very well organised and spread over two halls, one for big brands and one for the smaller brands. A fringe programme ran alongside the event, whereby 20 companies presented their products to buyers in various match-making sessions.

Roland Bleinroth, president of event owner Messe Frankfurt (MF), was pleased with the event. "US exhibitors and attendees seem to be quite positive about their experience at the first Paperworld China," he told OPI+. "Many used the show platform to scout for potential local [reselling] partners or for sourcing opportunities. The growing local demand for high-quality products makes the market more attractive for non-Chinese exhibitors than in the past…and of course the total number of attendees always tends to be significantly higher at Chinese shows.

"Again, similar to the recent Las Vegas edition, Paperworld China is off to a good start and promises to be even better in its next edition," he added.

For many western exhibitors, the show offered the chance to dip their toes in Chinese waters and test the opportunities to sell high-quality, design-led products to China’s rapidly-growing middle class. So, is China really just about cheap goods? Do the big branded manufacturers stand a chance?

Rüdiger Weiser of German exhibitor McNeill said that they do. "The quality of visitors has really exceeded our expectations. We have met with many new contacts willing to pay higher prices for good quality items. We have met with a lot of international visitors here too, from eastern Europe, the Middle East and even South America." Adrian Frost, managing director of UK manufacturer Rapesco, added: "The people here are becoming more fashion-conscious and are looking to buy differentiated products like ours. We see huge potential in the niche markets here in the future."

Horst Bubenzer of Durable, which was in Shanghai to learn a bit more about the Chinese market and hopefully find a distribution partner in mainland China, was also impressed by the interest. "We were very surprised by the traffic at the fair and we had a lot of visitors to our booth with a great interest in Durable products," he said.

Numerous people questioned by OPI+ claimed that the quality and ‘internationality’ of buyers "exceeded expectations" and the atmosphere of the show was suitably "bustling and lively". There were also no complaints about the high number of manufacturer reps among visitors, as was the case with Paperworld USA. And although some remarked that visitor traffic at the Canton Fair was heavier, it was agreed by most that Paperworld China had better quality and more international buyers than other domestic OP shows in Asia. "So long as it can continue to run regularly, it will become the most important OP show [in China]," said Martin Ma of Officemate China.

Furthermore, the language barrier was also deemed not to be a problem, most companies coming to the show armed with a translator. Most also agreed that the exhibition centre itself was very modern and well-equipped. But there were a few complaints around minor organisational issues. Dirk Kemper, VP of global sales at German manufacturer Fitrona Fibertec, commented on the limited food supply and the "drafty booth areas".

Silke Decker of Germany-based Cordier Paper added: "In the halls it was very cold so this should be improved. Also, the restaurant was not so good." Other common complaints revolved around the lack of wi-fi areas at the show, the difficulty of getting buses and taxis to and from the centre, and the lack of a gala dinner.

With Paperworld China costing less for exhibitors than Frankfurt, attracting more buyers than Paperworld USA, and being part of what is already the world’s largest trade show, there are great expectations that Paperworld China will one day become the biggest OP show in Asia and one of the biggest in the world. This success, of course, depends on the show’s ability to attract greater numbers of international exhibitors and buyers going forward. But this, judging by the success of the first event, seems likely.

Certainly, the vast majority of exhibitors and buyers that OPI+ spoke to said they would definitely be back for more. "Obviously Paperworld China is a lot smaller than Paperworld Frankfurt at the moment, but I have the feeling it will grow," said Multichem’s Nirsimloo. "I met a lot of people who were visiting the show to check it out with a view to exhibiting next year." Ma of Officemate China, who said he goes to Paperworld Frankfurt every year, said that the Shanghai show made him think that he would no longer need to go to Frankfurt.

Sharon Zhang, Asian VP of manufacturer HK Wentworth, went as far as to say: "It was a first class investment for our company… We were busy on the stand, perhaps slightly busier than at Paperworld Frankfurt and this was the first exhibition in China. We are all aware of the huge potential of the Chinese and Asian markets and really do believe that it will become, in time, the world’s largest OP trade show." 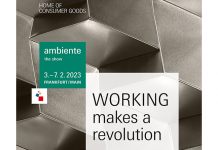