With the absence of some of the show’s big exhibitors, Paperworld 2006 was an event with a difference

Last Friday morning in the Torhaus centre, high above the frenetic activity of Paperworld 2006, Ruth Lorenz, divisional manager for Messe Frankfurt&acute;s Paperworld, voiced her disappointment over this year’s absence of many big names. She said to OPI+. "I am absolutely not happy about it. If the industry is not joined together through product ranges and brands, it’s a big pity.

"The industry deserves an event once a year. I think it’s also a pity for the smaller companies that come every year and are very innovative, to be confronted with this kind of strategy from the big brands."

When asked about the success of the show in general, Lorenz offered a fair response: "It is difficult because there are now so many industries within Paperworld. The hobby/creative sector is booming at the moment &ndash; in Hall 2 they are all happy. On the other hand, we always reflect the market so if there are problems within the industry, it automatically impacts the ambience at the show."

On paper, the trade show was a success, although figures were down on last year. There were 2,596 exhibitors, compared to 2,708 last year. The number of countries represented was 67, against 69 in 2005.

Of the exhibitors and delegates OPI+ spoke to, there was – as always – the usual mixed bag of satisfied and dissatisfied customers, which is often a result of a company’s strategy as much as anything else.

Albert van der Horst from Netherlands-based Despec Group commented: "To my regret I have to say that I found the exhibition not that dynamic, and I have seen no real innovations or exciting new products, but we had some interesting and promising discussions, so again it was worthwhile being there."

Delegate Olga Rodina, import manager of Moscow-based Pragmatic Express, claims that the show was a good investment in her company’s resources. "We found this exhibition very successful because we had lots of meetings with our present and future suppliers. Visitor traffic was rather big, but not huge."

One happy exhibitor was Ingemar Brostrom, president of Isaberg Rapid. "Messe Frankfurt has done a great job considering the attendance of less exhibitors and visitors," he told OPI+, although he added that Isaberg Rapid had not decided whether to exhibit at Paperworld 2007 or not.

The exhibitors and delegates interviewed all agreed, however, that the halls were significantly quieter than in previous years. Nevertheless, absent exhibitors were all there in force, which underlines the continued importance of Paperworld in the industry, but raises serious questions about the cost of booth space.

Lorenz believes there are signs that next year some of the big names will return. "We have already had many meetings with them," she said. "It is too early to say right now, but I think Paperworld is still the most attractive meeting place for the industry in the world…Messe Frankfurt has not raised the price for exhibitors for three years in the hope of not deterring more names."

Avery Dennison is one absentee that is not likely to return next year. Jonathan Smith, VP of sales at Avery Dennison Europe, told OPI+: "Based on what we saw in the halls and heard from other visitors, it’s unlikely we would go back as an exhibitor in 2007. However, we had a lot of productive meetings and it’s still a great, cost-effective meeting venue for the OP industry."

Many of the said meetings held by the big brands ended up taking place in the suits of the Mariott Hotel, which was mockingly-dubbed Messe Frankfurt’s "Hall 11". This created a certain feeling of resentment among some small vendors, which in essence were staging the show while the large "parasitic" exhibitors were reaping the benefits next door.

A source from fellow absentee Acco says the company is also unlikely to return next year. "Overall I would say the interest shown from customers has been much less than in the past, which was reflected in the number of visitors," the source told OPI+. "Paperworld also needs to make it less attractive for the Asian manufacturers to participate. It is them fishing in the pond where the European vendors have to make their living, and thus allows them to invest heavily in shows like Paperworld."

Lorenz says she understands this concern and claims that she curbs Asian participation at Paperworld. "We could have more Asian companies exhibiting but we want to get the right balance among countries. We don’t want to have a huge amount of Asian participants, but we do want to enlarge their spaces which will enhance the quality of the show."

Henkel, which still had to pay for its space this year due to late cancellation, confirms it is still undecided about next year. The company admits that it only pulled out this year on the back of the other "big ones" cancelling, which it thought would dampen attractiveness for big local and international customers. (Arno Alberty, however, told OPI+ that his "strong advice to Henkel would be to participate again in 2007!").

Some agree that without the magnetism of the big vendors, there were less local and international visitors. But Mark Austen of UK dealer group Office Club claims that the absence of the big names actually enhanced his Paperworld experience this year. "Paperworld 2006 was an excellent investment in our resources," he said. "The absent vendors were companies that we know well anyway, so it gave us more time to develop new relationships with other exhibitors."

As the largest and most global platform for the office products industry, Paperworld Frankfurt will undoubtedly continue to hold a solid position in the heart of the industry for many years to come. However, the introduction of new shows such as Paperworld USA and Paperworld China have weakened its sphere of influence. Alberty also believes that we may see "mini-Paperworlds" with a more local focus sprouting up in Europe, Asia and the Americas over the coming years. Local shows like Italy’s Big Buyer are also taking on a more international flavour. While no-one expects these shows to threaten the existence of the granddaddy event in Frankfurt, many agree that their growing popularity means that Paperworld Frankfurt must be strengthened.

Many exhibitors and delegates believed that one way to do this would be to end the show on a Friday rather than a very quiet Sunday. Another way to boost the show would be to stage it every other year, said many, due in part to a lack of innovation in the industry, but also as a result of exhibitor budgets. Our source at Acco, for example, said: "If Paperworld wants to create a solid platform for the bigger manufacturers to participate, it obviously needs something to change in the overall approach &ndash; perhaps an event once every two years rather than every year."

Ron Jakeman, group managing director of UK-based exhibitor AF International, added: "I suspect that eventually it will be held every other year. Paperworld China will undoubtedly grow in stature and the Chinese market is a huge opportunity, but we must never forget our European markets."

Despec’s van der Horst said he thought that the focus at Paperworld Frankfurt was still too German. "I think Paperworld and its exhibitors are still focusing too much on the German market – this is in a way understandable, but by claiming to be ‘the world’s leading show for our industry’, it should try to get a more global attitude. I have the impression that the exhibition had a more international approach and ‘look and feel’ a couple of years ago.

"Also, knowing that the Imaging part is representing a very substantial share of the OP industry, Paperworld should focus more on this category, in terms of location of the hall and its efforts to get the leading vendors participating. Nevertheless, I think the number of visitors in Hall 1 was quite good and this must give Messe Frankfurt the confidence to further enhance this category."

Vincent Vanderpoel, VP and general manager of Imaging & Printing Supplies EMEA at Hewlett-Packard, believes that discussion forums would bring value to the show. "We would appreciate it if Paperworld could provide a platform for ‘industry knowledge transfer’ next time, ie organising podium discussions during the fair that define a specific topic with attendees from the industry, but also with key analysts and journalists. Perhaps a moderator (somebody from OPI?) could drive the discussion to make it powerful and interesting for the audience. Certainly HP would offer to contribute to such an activity with a spokesperson if it wanted."

Lorenz said she believes the main challenges for Papeworld Frankfurt going ahead are finding the right balance between different countries and different industry sectors; and bringing new themes into Paperworld such as Imaging, which was brought in three years ago.

But does Lorenz think that some exhibitors at Paperworld Frankurt may relocate instead to Paperworld China? "I don’t think so," she said. "Because in all our shows we have seen a really interesting development – in every country where we organise a show, the next year when the ‘mother show’ in Frankfurt is taking place, we have more visitors from that country. The success of Paperworld China will bring more visitors to Frankfurt." 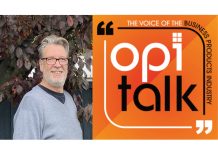