25 July 2007 — London (UK): Three office products executives were "cloathed" this week as liverymen in the Stationers’ Company, one of the world’s oldest organisations.

Nicholas Afriat of Bantex, Anthony Bailey of DP Communications and Derek Rogers of Masters Group Holdings attended the ceremony in Stationers’ Hall close to St Paul’s Cathedral in the heart of the City of London.

The Stationers’ Company, which this year celebrates the 450th anniversary of it being granted its Royal Charter, is one of the few livery companies that still maintains close links with its underlying industries. The current Master, John Waterlow, belongs to a family whose name is synonymous with the stationery industry. 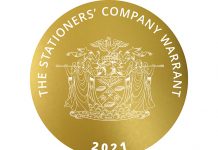