OfficeMax will soon be back on Wall Street. Less than a year after being delisted following its acquisition by Boise Cascade, the parent has announced an agreement to dispose of all its non-OP businesses and rebrand itself purely as OfficeMax.

After many years of trailing a distant third to Office Depot and Staples, the new OfficeMax, aided now by its considerable contract presence, will offer far stiffer competition with operations in the US, Canada, Mexico, Australia and New Zealand and annualised sales for the first half of 2004 of $8.6 billion.

The pre-merger OfficeMax did not always enjoy the best reputation on Wall Street, hampered no doubt by two years of straight losses and eccentric treatment of its own shareholders. And even when Boise swooped to buy ‘Max last year, it met with a lukewarm response in some quarters.

But while disposal of the timber and paper divisions has generally been hailed by analysts, Prudential Equity Group’s John Tumazos warns that old misgivings over the original deal to buy OfficeMax won’t disappear overnight. "Many retailing growth investors," he says, "scoff that Boise Cascade never will achieve Staples’ level of excellence."

It certainly makes the US power channel scene more interesting than it has been for some time, however.

Once the transaction is completed, which is expected to be in November, George Harad, current chairman/CEO of Boise Cascade, will become executive chairman of the OfficeMax board. Boise Office Solutions CEO Chris Milliken will assume the president/CEO position. OfficeMax’s corporate headquarters will be in Boise Office Solution’s current base in Itasca, Illinois. And while the new ‘Max will have its work cut out to become more than the also-ran it previously was, the signs are positive.

Tumazos appears to have faith in Boise’s strategy. He says: "We are impressed with management’s plan to lower the costs structure, lower debt via asset sales, and shift its focus to consumer and office products."

Tumazos points out that selling its non OP-concerns so quickly is "a big achievement". He had anticipated that it could have taken "several years" to complete the sale of some of the loss making units such as uncoated free sheet or newsprint, which would have ultimately dragged down the valuation of the office supplies business.

And in the scenario of Boise managing to sell them all, there was always the strong likelihood that it would not have been able to do so at a very good price. As it stands however, Boise has got itself a very good deal.

Tumazos says: "The sale of timberlands, building products and paper businesses for $3.7 billion plus earlier smaller Louisiana real estate and OSB sales creates $3.9 billion total proceeds, which exceed our $3.2 billion asset sale proceeds estimate made on 16 April or $2.5 billion initial estimate we made on 8 January."

It marks the culmination of a dramatic turnaround in Boise’s history, from being predominantly a manufacturing company to a distribution concern.

The decision to rebrand as OfficeMax, first mooted when the acquisition was made last year, may be sad for some of the purists but makes perfect sense, as ‘Max is the name most end-users know.

Not everyone was impressed by the name change, however. Rob Frankel, a Los Angeles-based branding expert, is rather dismissive. He says: "It’s really an image play, not a brand play. It’s a corporate facelift. It’s the same animal, but you’re going to put her in a new dress and pull up her cheeks about an inch. It’s all for show; there’s really no substance there."

Are Depot and Staples quaking in their boots? Time will tell. 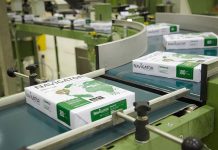