22 February 2005 – Birmingham (UK): As many as 76 exhibitors have already confirmed places for the forthcoming MAIN Event, to be run jointly by dealer groups United, Advantia, Integra and Nemo.

The event, to be held on 20-21 May at the NEC in Birmingham, is expected to attract around 700 dealer delegates, say organisers, who say they are delighted at the response they have received from trade suppliers and wholesalers so far.

Suppliers wishing to secure a place should contact Sally Hoggett on 01494 837 964 or email sally@evenmatters.co.uk. 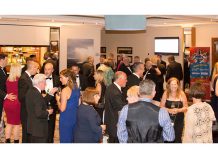