Danka Business Systems has recently embarked on a cull of international operations in a bid to cut debts of roughly $175 million.

Since March of this year, Danka CEO AD Frazier, has embarked on a new strategic game plan to reverse the companies fortunes and to refocus attention on the buoyant US market.

The game plan which has involved a combination of operational improvement and cost reductions has mainly focussed on the sale of assets.

At the end of August, Danka completed the sale of its Australian unit to Onesource Group for $12.9 million in cash. The sale of the unit, which generates annual revenues of $50.2 million, was part of company strategy to concentrate on Europe and the US.

And just two months later, the manufacturer [is planning] plans to sell its European business to Dutch OP manufacturer Ricoh Europe for $210 million , proving that the company has once again narrowed its focus and is to concentrate fully on the US market.

Danka chairman Frazier said: "The sale to Ricoh of our mature and successful Europe-based operations, which represents roughly half of our current total sales and operating profit, is a major step forward in our previously announced plan to release value through selected asset sales. The proceeds from the sale will help reduce indebtedness and enable us to focus on our US-based business where we believe the growth opportunities are substantial."

Over the past six months Danka has been strengthening its US contracts, undoubtedly to secure its future in the region. For instance, in January the company expanded its strategic relationship with its largest customer, Pitney Bowes Management Services, in what then CEO Todd Mavis described as "a key driver in our goal to stabilise Danka’s services revenue — a key tenet of our strategic plan".

As Danka bids farewell to its international operations, it appears that it has succumbed to chasing the American dream. 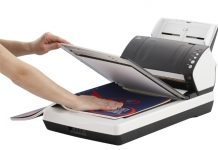