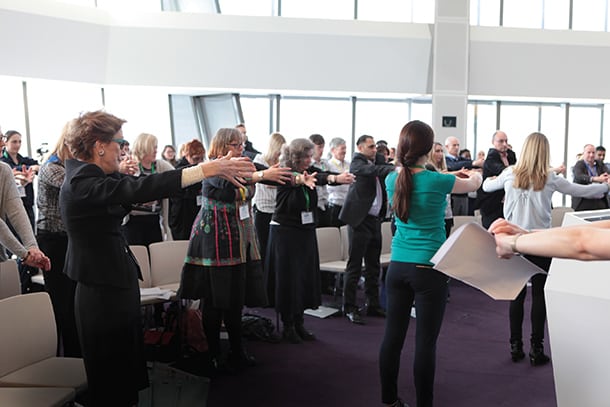 Sitting is not really the new smoking – it doesn’t pass on any secondary effects, and employees often cannot control how long they sit in the working environment. But that aside, office desk sitting is becoming one of the largest factors and strongest messages in the fight for healthier workplace surroundings.

While recent headlines have been screaming about ‘sitting is the new smoking’, the theory has been criticised by some as just “another way to control us”, or “pushed by the creators of office furniture”, and the lack of published scientific research on the matter has certainly hindered any real progress.

Until now. There is a substantial and growing amount of peer-reviewed data that has been conducted worldwide, and is now coming to fruition and being released into the public domain. At the recent Active Working Summit in London, UK, experts from around the world shared their research. As information was revealed to a diverse audience, it became clear that all the evidence points to the same conclusion: reducing sedentary behaviour – especially the amount of time spent sitting – in the workplace can lead to increases in health and well-being as well as productivity at work.

It doesn’t take a genius to figure out that unwell employees are likely to require days off sick, which results in millions of missed working days and billions in lost revenue. In other words, an unhealthy workforce not only impacts on employees themselves, but also a company’s bottom line and even the economy at large.

At the event and referring to a Financial Times report from April 2016, expert adviser on health and work to NHS England and Public Health England Dame Carol Black noted that UK workers are 14% less productive than before the financial crisis of 2008. As a result, she said, we have to implement lots of things to get people more productive.

Britain’s Healthiest Workplace campaign, for example, aims to get businesses involved in understanding the link between health and well-being and company productivity. Black said one of the initiative’s main objectives is to engage with employers to ensure they understand a healthy work environment is not just a nice add-on, but that conditions such as obesity and high blood pressure, as well as inadequate physical activity, have a direct link to the number of working days lost.

Educating businesses about the real effects of a sedentary working life and encouraging employees to get up and move more is an uphill battle, but the general consensus is that without management buy-in and being led from the top, health and wellness in the office will continue to remain just a ‘nice-to-have’.

Dr Nicola Eccles, co-founder of CP Active and Director of Research and Lecturer in Health, Wellbeing and Physical Activity, concurred, citing research undertaken that was based on targeted subliminal messaging in community spaces such as offices. “We learned that senior management need to walk the talk. The culture of desk working needs to be rewritten by leaders and managers within an organisation. The question now needs to change to ‘why are you at your desk?’ from ‘why aren’t you at your desk?’.”

The overriding opinion is that sitting mustn’t simply be substituted for standing, as Dr Benjamin Gardner, Senior Lecturer, Dept of Psychology at King’s College London, pointed out: “There’s a key misunderstanding: the sitting risk is different from not doing physical activity. We need to raise awareness and provide the clear message that we should be engaged in active standing, not sitting/standing still.”

An important link in the chain will be dealers selling ergonomic furniture to interested parties. But, as many experts are quick to assert, educating users on office furniture such as sit-stand desks, for example, is imperative. In Scandinavian countries, these types of desks have been available for office workers for decades, but still employees are sitting for too long. At the summit, inventor of the Steppie balance board, Gitte Toft, argued that it’s important to understand the cognitive psychology behind this behaviour – humans are simply designed to be lazy and programmed to conserve energy.

According to Professor Alan Hedge from Cornell University, after studying the effects of different types of ergonomic office furniture, there are varying degrees of musculoskeletal and productivity behaviours associated with each one. Hedge said that standing up often and moving is what matters, not how long you remain standing: “We have to educate companies and employees and teach them how to use these products properly. You can’t just simply buy them.”

The country also has shining examples of structures that have been purposefully designed as activity-based workplaces such as the National Bank of Australia and Medibank, both based in Melbourne. These buildings are hot-desking environments and designed to increase activity and facilitate movement within the premises.

Perhaps the best endorsement of just how seriously governments are starting to take health and well-being in the workplace is the launch of Fitwel by the Center for Disease Control (CDC) in the US. The CDC co-developed and is the licensed operator of the high-impact healthy building certification that has been created to support healthier offices and improve occupant health and productivity.

In order to gain certification, the Fitwel Scorecard measures health within 12 sections that impact the design and operations of a site and property interior, such as outdoor spaces, stairwells and location. Fitwel offers a three-star rating and more than 60 cost-effective, design and operational strategies for enhancing building environments.