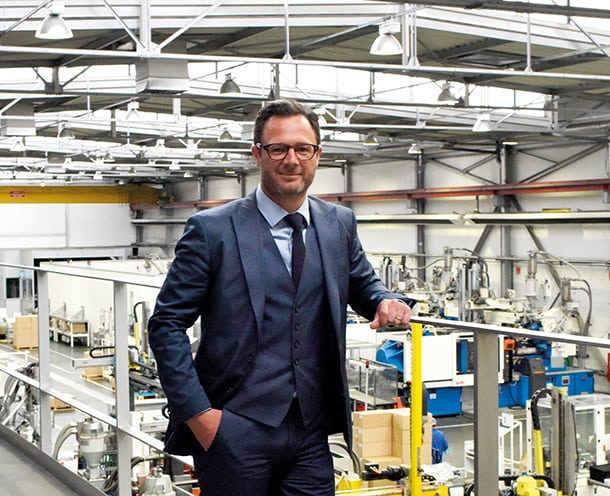 CEP Office Solutions is well known for its range of desktop accessories, but it has recently found success in other OP categories, including breakroom, lighting and technology products. The man behind the company’s transformation, vision, strategy and future plans is Managing Director Cédrik Longin.

CEP is a business that was founded in 1923. In 1985, it was bought by current CEO Gery Dambricourt. Its headquarters and four main factories are situated in the Auvergne region of central France, with a further facility in Bayonne, in the south-west of the country. It has also recently opened its own manufacturing plant in China dedicated to the production of LED lamps, one of the new product lines in the company.

The company employs 245 people, many of whom have been with the company for 15 years or more. Indeed, Longin attributes much of CEP’s success to this accumulation of experience and long-term dedication from the workforce, though he acknowledges that there’s also a need to attract ‘new blood’ and bring in fresh ideas.

Today, more than 95% of the company’s sales are generated within Europe, but exports to North America, Africa, China and Australia are seeing double-digit growth thanks to CEP’s continued drive for international expansion.

However, that wasn’t always the case. When Longin joined the company in 1999 as International Key Accounts Manager, CEP was mainly focused on the French market, with export sales only accounting for 8% of the total value of the business, compared to 43% now. He was given the responsibility by then Managing Director Etienne Béchet de Balan to build revenues outside its home nation, a task he admits was a huge challenge.

That said, thanks to the quality of the products, the support of dedicated teams and a customer-centric outlook, export sales began to develop at a fast pace.

Longin was promoted to Export Sales Director in 2006 and progressively assembled a team of talented and multicultural export area managers.

Though the company is now a leading European manufacturer of desktop accessories, it was hit hard by the consequences of the worldwide financial crash. A 30% drop in sales during the first quarter of 2009 brought the imperative need for diversification sharply into focus.

Longin saw that the company’s core business of desktop accessories was declining by over 3% year on year and if CEP was to prosper in the future it would have to diversify. Getting that message across internally was a tough undertaking, he admits.

But he received backing for his plans and became International Sales Director in 2009, with responsibility both for the company’s French and international markets. He directed his team – which he describes as “brilliant and incredibly committed” – to focus on innovative and adjacent product segments that would be unaffected by an increasingly digital and paperless world, while also developing new lines which fully embraced emerging technologies.

Parallel to this, Longin investigated the possibilities of developing partnerships with other producers. The first of these occurred in the same year – 2009 – with British firm Strata, a manufacturer of plastic storage boxes, and it proved mutually beneficial. As Longin explains: “This was an ideal complementary product to our range that had the benefit of not just being linked to sheets of paper – you can store anything in a plastic box. It was very popular in the UK, but not well known in mainland Europe, so presented great opportunities. It’s been a massive success.”

CEP decided to repeat this strategy, looking to partner with others producers that operated in niche markets where quality and innovation were key. In time, new ranges including clocks (AIC), hygienic bins (Rossignol), plastic cupboards (ABM) whiteboards (Rocada) and light therapy (Dayvia) were added to the catalogue. A recent partnership with Belgian firm Office Deco has also brought decorative products into the portfolio.

“Our strategy is to partner with specialist suppliers where we see something unique, but also to manufacture products in-house where we can,” says Longin. “Our Take-a-Break range of accessories for tea/coffee breaks is a good example of the latter, as is our new ‘Take Care’ range of safety stickers. Our goal is to spot a gap in the market and fill it with a solution.”

CEP’s core business is still in traditional desktop accessories, but Longin realises that those days are numbered in the long term. Focusing on key areas that either won’t be affected by digitisation or which complement it is vital, he explains: “An office will always need lighting, breakroom products and signage, for example.” The company’s decision to branch into LED lamps – some also including charging ports – is a good example of this philosophy.

CEP’s desire to concentrate on technologically-advanced lines is further evidenced by its current focus on QI charging products – the ability to recharge mobile devices wirelessly. “When you see this demonstrated for the first time it looks like magic,” Longin says. “We’ve had excellent feedback and many listings – it provides a simple solution to the perennial problem of limited battery life in portable technology. Just place your device on a charging pad when you’re not using it and it’s constantly topped up.”

As might be expected, plagiarism is a constant issue – competitors are quick to spot a good idea and produce their own range of copycat products. “This has already happened with our Take-a-Break range,” comments Longin. “However, we do say that imitation is the sincerest form of flattery…”

Surprisingly, he doesn’t see cheap imports from Southeast Asia as a major threat as CEP’s core products – bins, trays, magazine racks – are all quite bulky. “Importing these products involves transporting a lot of empty space,” he explains. “This tends to make it uneconomic to ship them over large distances and somewhat protects our home market.”

What is a far greater problem, he explains, is consolidation within the OP industry – the disappearance of many big names and the concentration of purchasing power within fewer, increasingly larger, resellers makes market conditions riskier each year.

Longin’s role has developed in line with the company’s successful transformation and he became Managing Director of CEP in 2013. Despite the threats and challenges that the future holds he remains optimistic. His vision of an expanding product line and an increasingly international outlook has proved a success and puts CEP on a firm footing as it moves forward.