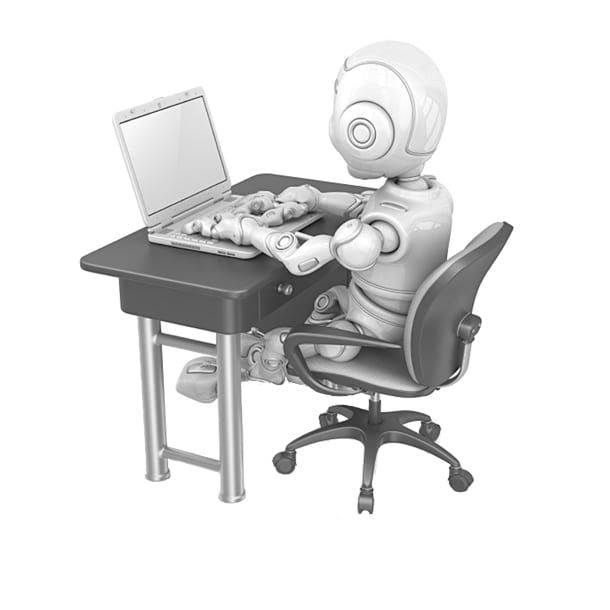 No one knows exactly what the future holds, but we can have a good guess. In part one of two articles, this white paper thinks about robots, mobile working and having a telepresence.

This paper was commissioned by Esselte to mark its 100-year anniversary. Its purpose is to examine the world of work, both current and future, and to identify the challenges facing companies and individuals as they come to terms with the digital age.

When Esselte was founded, the industry was only just coming to terms with office work as we recognise it. There were no calculators, the biggest companies employed large teams of typists, Tippex had yet to be invented, so any errors required starting again from the beginning, carbon copy or the printing press were the only ways to create duplicates of documents, and the telephone was available only to comparatively few.

Esselte commissioned Futures House Europe, a scenario planning company specialising in envisaging the challenges facing organisations, to look at the world of work and its implications going forward. This paper was co-authored by Richard Watson, a futurist and author of books such as Future Files and Future Minds and a regular contributor to Fast Company magazine, and Andrew Crosthwaite, Richard’s business partner and Planning Director of the London advertising Agency, BLAC. In addition to Esselte, Futures House works with London Business School, Nestle, KPMG, TUI and Save the Children.

Further sections will be published in May’s OPI.

The impact of automation

Not long ago, automation transformed factories and then had an impact on the office workplace. The introduction of robots to the production line was originally hailed as a good thing (except by people whose jobs they replaced). An automated world would free up more leisure time, or so we believed, allowing us to fulfil ourselves in different ways.

But from physical production, automation is increasingly taking a central role in all aspects of the workplace, impacting on administrative and transactional work. As the New Commission on the Skills of the American Workforce recently concluded: “If work is routine, no matter how complex it is, chances are it can be automated.”

The authors of the book Race Against the Machine predicted: “The AI [artificial intelligence] revolution is doing to white collar jobs what robotics did to blue collar jobs… Computers (hardware, software and networks) are only going to get more powerful and capable in the future and have an ever-bigger impact on jobs, skills and the economy.”

This is nothing new – US Bureau of Labor data shows that between 2000 and 2009, five million interaction jobs (law, nursing, service) were created. At the same time, three million production and office-based transactional jobs vanished. So arguably we are seeing a gradual upwards migration of work. But what we will encounter in the future is not just change, but accelerating change.

Increasingly, AI will come into play in jobs and functions that involve complex interactions and knowledge-based decision-making. Cars will be self-driving. We will become accustomed to AI-based medical diagnoses. We may consult AI lawyers for guidance. Human interaction can feasibly be taken out of estate agency. Workers will be able to interact with virtual HR departments. Which probably means that anyone reading this piece has a chance – indeed a likelihood – of at least part or even their entire job being taken over by technology in the future.

In the past, the majority of white-collar workers were office-bound, with only sales staff regularly off site. The possession of an office, its dimensions, location and furnishings, were a measure of seniority and influence. Now the projection is that by 2015, the world’s mobile worker population will reach 1.3 billion, or nearly 40% of the total workforce, according to IT analytics firm IDC. We are seeing and experiencing an inexorable shift to partial or total mobile working.

This has a number of drivers – new technology, as well as the desire of forward thinking companies to improve employee satisfaction, reduce costs and be more responsive to customer needs inside and outside office hours. And, importantly, the recognition that a needless five days a week commute wastes resources.

Where we live is becoming increasingly urbanised. By 2050 it is estimated that 80% of the world’s population will be city dwellers. As more people live in cities, so commuting becomes an issue. Workers in Thailand have the longest commutes in the world, with an average of two hours a day – a potential saving of an entire working day a week by working from home. The average speed of travel in Bangkok is just 7mph during peak hours – or jogging pace. This is clearly not sustainable in any sense of the word.

Rather than work being where the office is, for mobile workers it is where you are – whether it is at home, in the car, in an airport, at a service station, in a coffee shop, in the office of a client, or on your holiday. So in the future, many workers could be operating in a fluid ecosphere, interacting with people in different spaces on a permanent, temporary or ad hoc basis. The cloud for them will not refer to a storage system, but a virtual hub, accessed by a mobile, semi-structured workforce.

Mobility suggests ease of movement, but ironically, the more mobile people become, the more devices they are carrying with them – the so-called ‘mobile stack’ (average number of devices carried by a mobile worker) has grown to 3.5 in 2012 up from 2.7 in 2011 – nearly all down to the growth of tablets. The benefits for employers are obvious and the savings for companies by encouraging mobile working can be considerable – if eligible workers stayed at home, businesses could save nearly $8,000 annually for each telecommuter, according to Workshifting Benefits: The Bottom Line.

But while the company potentially enjoys cost benefits and the employee enjoys (in theory) a more flexible lifestyle, there are also significant issues. Work has a value beyond financial reward for many, if not most, people. We are social animals who depend on interaction with others for our stimulation. An IBM European study called The Mobile Working Experience showed that people who regularly work remotely from the office report problems with collaborating and communicating with others, with half the sample complaining about this.

Dell’s Evolving Workplace study found that more than one third of global workers perceive remote working as ‘eroding team spirit within the workplace’ (36%). This is of particular concern in Germany (55%). And building on the points made earlier on the hours that many people work, mobile workers could be worse off than those who are office bound – and at least visually accountable. A survey of mobile workers by Sheffield University’s Institute of Work Psychology and Management, conducted for iPass, found that over 25% of respondents believed they were working an extra 15–20 hours a week because technology enabled (or forced) them to do so.

And more hours worked do not necessarily lead to greater efficiency or fulfilment. The same survey shows that mobile workers are more prone to multi-tasking than office-based ones – handling on average three to four tasks simultaneously – and a third of these feel less effective as a result.

Totally mobile working will suit some functions and individuals more than others, but what is inevitably missing is the social dimension – not simply office gossip, but more importantly access to the informal interactions, which are increasingly important as work becomes more collaborative.

From the employer’s point of view, in addition to monitoring performance and activity, ensuring that people throughout a company understand and live the values of the organisation will become more difficult, the more physically detached employees are. As companies think of themselves as brands, often differentiated by cultural beliefs and style, the more this detachment may become significant.

The traditional office-based model is clearly dying. A small number of organisations will remain office bound for a variety of reasons, but they will be small in number. These will include those where security is paramount (think GCHQ, the UK government’s security intelligence centre), places where face-to-face customer service remains important and those where personal interaction on the premises is paramount, such as hospitality and retail, although some restaurants in the Far East are experimenting with robotic waiters, taking orders, serving and processing payment.

Many offices are on a journey from cubicle to open plan to something more zoned and flexible. As more and more people become mobile workers, offices will resemble places to meet up and interact, rather than fixed bases. And offices will have to work harder, like their inhabitants – office space utilisation is expected to have increased from around 50% to around 75% between 2010 and 2015, according to research for Jones Lang LaSalle, with implications for people’s natural territorial instincts.

Modularity will be an important facet of office design. Office architects will need to show a close understanding of the vision and values of the companies they work for and create spaces and environments that meet these. Large cities will be populated with spaces to provide ‘pop-up’ offices, where companies can temporarily locate project teams. These will also be used by micro-organisations and standalones who want to be surrounded by companies that are like them.

Technologies will be embedded in office spaces so that they will be responsive to the moods of employees and adjust lighting, temperature and ambient noise accordingly.

Although everyone will have mobile devices, the office structure will work in plug-and-play mode – so that all of the resources an individual wants are available anywhere in the building. Instead of having to find meeting spaces, literally anything will be capable of being a screen, so that desktop monitors and presentation projectors will disappear and be replaced by intelligent glass – or simply nothing. And maybe the 3.5 device ‘mobile stack’ that we carry with us will start to shrink.

Telepresence will be the norm. Employees working remotely will be able to send hologrammatic versions of themselves to take part in meetings and conversations. Telephone-based conferencing, with the feeling of detachment and disempowerment, will be a thing of the past. And at a more causal level, people will be able to drop in to meetings elsewhere in the building without having to leave their desk – assuming they have one.

Part two: Further extracts of Esselte’s white paper will be published in OPI’s May issue, looking at the structure of work and the process of innovation.

Can’t wait for that? Then you can read more about Esselte’s The Future of Work white paper here