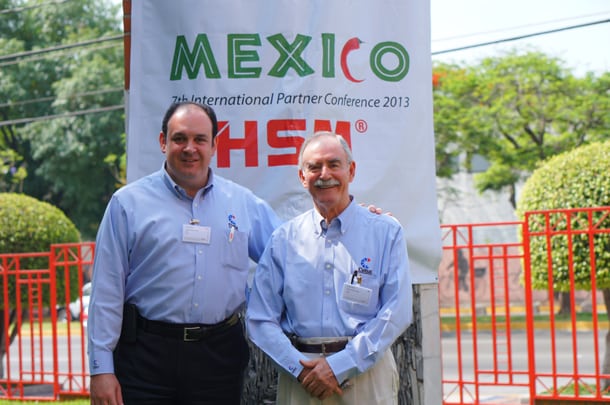 Shredder manufacturer HSM held its seventh global partner conference in the Mexican city of Guadalajara at the end of April. The event – which was hosted by HSM’s Mexican partner Ciasa – was attended by more than 70 delegates from the company’s worldwide distribution network. Given the location of the conference there was a strong turnout from Central and Latin America, but distributors from as far afield as China, Hong Kong, Thailand, India and Russia also made the long trip to Mexico’s second largest city.

The first day of the conference included a review of HSM’s recent performance, its latest branding and marketing strategies and a series of roundtables that allowed HSM’s distributors to suggest new ideas. This was followed the next day by product demonstrations, both on the shredding side and for HSM’s presses and balers which are used for waste recycling.

One area that the marketing team at HSM has been focusing on is brand awareness and perception. Customer surveys conducted last year confirmed product quality and high service levels, but identified an emotional gap in being able to connect or identify with the brand – a sort of Pepsi v Coke branding issue in the shredder world. There was a perception that HSM was too technical and was lacking a human element. In response, it has developed its ‘More than a shredder’ and ‘Great products. Great people.’ messages and has introduced more storytelling into its marketing and advertising. The company’s website also provides more information about the people at HSM in order to add a human touch and there is a new CSR brochure which highlights HSM’s environmental commitment and its support of various charitable causes.

HSM’s web platform is currently undergoing a revamp and a new website is due to go live in July. This will result in improved performance for distributors, better media management and higher search engine optimisation results. For reaching end-users, HSM is rolling out its presence on the Commerce Connector platform in Europe over the next 12 months and is currently looking for a similar product in other markets. It is also investing further in social media; a team in Germany is testing Facebook and the company now has over 70 videos posted on its YouTube channel. A new customer-facing smartphone and tablet app has apparently gone down well with sales reps and there is also a nice-looking consumer app that allows people to transform a photo into a ‘shred effect’ image.

One of the noteworthy guest speakers at the HSM partner conference was Tom Szaky, CEO of US-based recycling firm TerraCycle, who presented his firm’s concept and achievements to the audience. HSM is working with TerraCycle on a waste collection programme that involves HSM’s crushing and baling machines. TerraCycle has become quite well-known in the office supplies space after a number of initiatives with major manufacturers and resellers over the last few years. Szaky told OPI that a new, international project with Office Depot was in the pipeline and pointed to the world’s first pen made from recycled pens, introduced by Sanford this year.

HSM’s Managing Director Irene Dengler said that the conference had helped HSM receive “valuable and constructive feedback” from its reseller partners. “There was no particular highlight for me,” she told OPI, “as there was a very positive atmosphere during the entire conference. Such a successful event is due, not only to the agenda, but also to the delegates, and we were lucky to have great participants.”

Ciasa’s Guadalajara Sales Director Mario Garduño very kindly took me on a whistle-stop tour of the city’s main office supplies wholesalers. The largest player in the local market is San Felipé, which operates a retail store on one side of the street and a larger cash and carry wholesale outlet on the other, quite a typical retailer/wholesaler model in Mexico. The product assortment is probably what we’d call ‘traditional’ with a propensity of writing instruments from many of the leading international brands. BIC obviously has a large local marketing budget given its brand presence both inside and outside the two stores, but other brands such as Papermate, Pilot, Pelikan, Sharpie and Staedtler were also prominent. Local brands such as Scribe and Estrella seemed to dominate paper and notebook categories while Mae was a well-represented general stationery brand. San Felipé’s wholesale staff also promote brands by wearing a different polo shirt each day, with Kores the featured brand on the day I visited the store.

San Felipé’s wholesale customer base is largely made up of local stationery retailers and there are literally hundreds of small stores dotted around Guadalajara. Customers tend to visit the wholesaler in person, placing orders over the phone beforehand and then stopping by to collect the order rather than relying on a delivery service. As well as general office supplies, the wholesaler carries a wide range of back-to-school products, gift items and party supplies, reflecting the variety of merchandise typically sold by the retailers.

Watch an OPI video report from the event