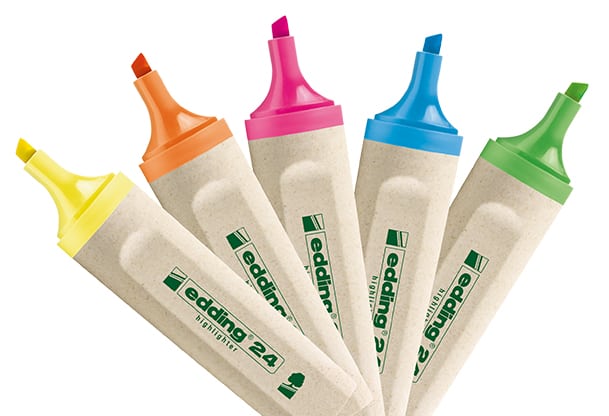 The concept of using our natural resources carefully is not new to edding. In fact, it has always been part of the company’s corporate social philosophy ever since it was established by its founders, Carl-Wilhelm Edding and Volker Ledermann, in 1960. Even in the early days, in addition to its commercial success, one of the foremost concerns of the family-owned business was that it should be socially responsible towards its employees and their families and protect the livelihoods of future generations.

Refillable products and the refill systems that accompany them have always been a fundamental part of edding’s product range. Initially, edding succeeded in considerably extending the life of an edding marker through these refill systems. But that was not enough: in 1995, co-founder Volker Ledermann had the idea of collecting used markers and disposing of them responsibly or even recycling them. In the same year, he received the B.A.U.M. Environmental Award for implementing his idea of a returns box.

It quickly became apparent that he was ahead of his time. Unfortunately, customers didn’t adopt the system immediately and it took until 2013 when perceptions and attitudes had well and truly changed. The returns box first started as more of a marketing tool, but has since become immensely popular with customers. Modern recycling plants mean that it is now possible to recover around 73 kg of recycled material from every 100 kg of used edding products collected. This recycled material is then fed into the production of new products, including edding markers.

The primary motivation for edding’s corporate social responsibility (CSR) philosophy is much more than a short-term – and short-sighted – financial profit outlook. CSR is at the core of the organisation and its long-term processes are not only supported by management, but also need to be embraced by all employees. As current CEO Per Ledermann says: “Ideas that bubble out from edding’s core won’t survive if they are motivated primarily by financial profit.”

The company began to adopt a consistent, integrated approach to corporate sustainability in 2014, with ISO 26000 – the standard on CSR guidance – as a model. Using this guidance, edding held a number of internal workshops to ultimately devise almost 70 binding targets based on the standard’s seven core themes. Five key areas of action were then identified: strategy, products, environment, society and corporate culture.

On the topic of the last of these points – corporate culture – Patricia Siebel, responsible for environmental management and CSR coordination at edding, echoes Ledermann’s point of the importance of getting employees involved and on board. She says: “We want our employees to feel happy at edding, to identify with the products and their development, production and marketing. Only if we do that will the ‘edding ink’, which we regard as synonymous with employee loyalty to the company, flow through their veins.”

She adds: “The best possible integration of economic, ecological and social aspects is edding’s stated mission and corporate goal. That’s why we’re doing everything we can to meet the personal needs of our staff and to find solutions for their different circumstances. This could be flexible working hours, home working or alternative childcare if the usual childcare provider drops out at short notice. We also, for example, offer older employees bespoke part-time working arrangements to facilitate a smooth transition into retirement.”

From an environmental perspective, edding is guided by two environmental management standards – ISO 14001 (environment) and 50001 (energy). Activities in this area include, for instance, the photovoltaic systems on the warehouse roofs at its headquarters in Ahrensburg and at its production plant in Bautzen, both in Germany. These systems save edding some 180,000 kWh per annum and eliminate 158 tonnes of CO2 emissions.

Explains Siebel: “An intelligent and efficient heating-cooling system in our production halls ensures that the entire business is heated in winter. It even means we can cool the production halls in the summer. A combined heat and power unit has been in operation in Ahrensburg since October 2010. This produces one third of our daily electricity requirement and covers our needs for the entire night. We are also using heat recovery in our in-house canteen.”

The manufacturer’s fleet of vehicles has included electric cars for short journeys since 2011. These are fuelled by green electricity from the company’s own electric charging station. Edding’s vehicle fleet also now includes a range of hybrid vehicles. Overall, its Green Car Policy provides a compulsory framework and defines the rules which apply to the selection of company cars and pool vehicles.

When implementing its CSR measures, one of the challenges edding encounters revolves around exerting more influence on the entire supply chain. “We are in the process of scrutinising our suppliers more closely from a sustainability point of view,” says Siebel. “There’s often a balancing act between what is possible in terms of price and quality on the one hand and what is offered in the respective countries on the other. It’s also important to give equal consideration to ecological, economic and social components. We have enjoyed trusting relationships with many of our suppliers for years, something which may be seen as a positive effect.”

The company’s sustainability performance is naturally significantly influenced by procurement and distribution logistics, as well as production. Wherever economically viable, edding is opting to manufacture its products locally. It is also highly demanding in its selection of transport service providers. Criteria include modern, low-emission fleets, the quantification of CO2 emissions, compliance with minimum wage legislation and support for corporate sustainability activities.

Ultimately, of course, it’s all about the product as well, and edding is rigorous about implementing its commitment to sustainability deep down at product level. The launch of the EcoLine range in 2008 represented a milestone in the company’s history. For the first time, recycled plastic – initially made up of leftover plastic from the industry – was being used to produce permanent, whiteboard and flipchart markers. Ongoing developments meant that, over time, post-consumer recycled materials were predominantly being used. This represented for edding a quantum leap in the implementation of product-related sustainability.

The post-consumer recycled materials mainly come from domestic household and industry recyclables, although a small portion still also comes from edding’s returns box for empty, used markers. As a result of these developments, since 2015 a total of 90% of the total plastic parts used in the products comes from recycled material, 83% of which from post-consumer plastics. This considerably reduces the use of new materials, avoiding CO2 emissions of up to 83 tonnes per year. The series also includes a highlighter – the edding 24 EcoLine highlighter. Made from at least 90% renewable materials, it contains water-based ink.

Edding’s EcoLine series is currently the only range of markers to have twice been honoured with the prestigious ‘Green Brand Germany’ award. Besides EcoLine, only 33 other German brands have received the award. The Green Brand organisation honours companies’ commitment to environmental protection, sustainability and ecological responsibility. 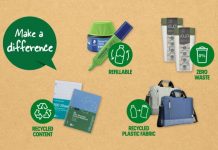 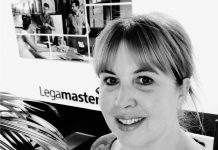 Leadership and structural change at Legamaster