Wholesaling is an interesting place to be at the moment – wherever you look, there’s something going on. ADVEO is talking about further, though not imminent, European expansion; German competitor soft-carrier is moving ever further away from its original stronghold of computer accessories to regain lost revenues; United Stationers is ruffling feathers in the US with its rejuvenated trUchoice programme while Vasanta has been causing controversy with the acquisition of dealer customer YES2 Solutions. And you can add to this that times are still tough, (consumer) money is tight, the industry as a whole is consolidating and everybody is trying to maximise their offerings and find more and more USPs.

And just as OPI hits readers’ desks (or screens for that matter) this month, Gem Office Products in the UK is poised to ship its first office products, going into direct competition with the country’s two broadline OP wholesalers VOW and Spicers.

But while Gem OP is a brand new kid on the block, umbrella organisation Gem Logistics most definitely isn’t. The company is a wholly-owned subsidiary of DCC, an Irish publicly-listed company worth €13 billion ($17 billion). Within DCC, Gem falls under the DCC SerCom segment, a leading distributor of IT, communications and home entertainment products in Britain, Ireland and France.

As such, Gem’s competencies as a distributor are not being called into question – the office products division will run out of its large and sophisticated logistics operation in Raunds, Northamptonshire which has plenty of capacity to accommodate the thousands of OP and related SKUs that will move in and out of there. Deliveries to resellers as well as to end-consumers, on behalf of those resellers, will be made by third-party providers – Gem Office Products does not have its own fleet of vehicles.

The company has also managed to recruit a team that comprises a core of OP experts, with Colin Learmouth, David Orr, Andy Hirst and Anthony Haworth all familiar names in the industry.

The key question here is does the UK need another OP distributor? From the outset, the answer is a resounding “yes”. The number of OP wholesalers in the UK has been whittled down from over 20 to just two over the past two decades or so, and Haworth, now Gem Office Products’ Commercial Director (formerly Spicers’ Director of European Purchasing), quotes choice as the primary reason for offering an alternative.

He says: “Our interest in the OP market was sparked by enquiries and requests for support from vendors and resellers since I moved to Gem  [in February 2012]. We conducted an extensive market survey in early 2013 and it quickly became clear that resellers were craving an alternative supplier option. The findings of our survey were overwhelming, with over 70% of those resellers interviewed interested in a new partner.”

Everybody OPI spoke to concurred with that market need. Of course, it very much depends on what’s on the table in terms of determining whether dealers and vendors are going to actively support a new OP distributor, and run the risk of alienating their existing partners in the process.

Adam Noble is Managing Director of Irongate Group, a dealer that is part of the Challenge Consortium and which is currently closely aligned with VOW as its single-source primary wholesaler. He comments: “Yes, as a general comment, I would prefer if there was somebody else because it gives me more options.”

But, he asks, “if there was a third wholesaler or distributor that was competing against the two established ones and if they were all of a similar size, wouldn’t it make it more difficult for them to be able to give us the sort of services and the prices that we’re getting today? At the moment, the wholesale channel is getting X amount of revenue from the dealer channel. If that revenue is shared between three or maybe even four, then VOW and Spicers would presumably have to look elsewhere, even other markets, to recapture that lost revenue. We need wholesalers to be good at stationery and office supplies so that they can buy well and then pass those prices onto us.”

Spicers’ CEO Alan Ball is quick to agree that if there was a third viable competitor, prices would undoubtedly go up. He says: “Two of the things that both Spicers and VOW offer are significant value-added services with delivery schedules, pick and pack, dispatch, catalogues, marketing support, etc; some of these with the assistance of the buying groups. But we can only offer those services because we receive a basket of orders and that basket allows us to invest margin into those services.

“The other thing that’s worth noting is that the industry has got significant overcapacity for the amount of dealers, wholesalers and manufacturers. The wholesale channel, the dealer channel, the contract stationery channel – everybody’s struggling to post results. And you only need to look at the number of manufacturer closures and the number of restructures to prove that extra choice is just going to add extra cost.”

It’s no surprise that Ball – and undoubtedly Robert Baldrey too who preferred not to comment – are not thrilled about the prospect of another competitor. Both have recently come under criticism for some of their strategic decisions which ostensibly create some conflict of interest, notably Vasanta’s purchase of struggling dealer YES2 Solutions  and Spicers’ launch of its B2C website MemoEtc. Both companies have been at pains to explain and justify their decisions and the occasional blurring of lines, but they have nonetheless left a bitter note among the dealer community.

Gem Office Products’ promise – and its core differentiating factor, according to Haworth – that it’s strictly trade-only are as such being welcomed. He says: “In our survey, resellers were very vocal about their frustrations and what they wanted from a supply partner – clear and transparent pricing, a non-competing partner, exceptional service and a true partnership approach were all high on their wish lists.”

Dealer demand aside, absolutely crucial in getting Gem Office Products off to a good start is the right manufacturer support. There’s been a definite reluctance to talk openly about supporting the new competitor in the market, but Haworth – without giving names – is confident that the distributor will start with a broad range of office products and quotes approximately 60 vendors to be part of the initial offering.

One of these 60 agreed to speak to OPI but prefers to remain anonymous. The spokesperson says: “One of the key restrictions that we have is that much of our range is built around the key accounts in the UK. As that would be the two main wholesalers, and they are not broad range stockists, it’s quite restrictive. Also the route to market is a bit restrictive. What we’ve signed up to with Gem Office Products is certainly broader than what we’re currently doing with the contract stationers and probably equal in terms of SKU count with the wholesalers. But in addition to attacking the customers of the two wholesalers, Gem is also heavily involved with the retailers and the mass market operators like Argos and John Lewis, and this is very attractive for manufacturers as they can diversify their distribution base.”

Spicers fell foul of many OP vendors at the beginning of last year over pricing issues and a slimming down of its supplier base. The vendor OPI spoke to is not one of those ‘culled’ but it was at risk and like many of its peers, is concerned in this shrinking and consolidating market.

The source says: “With Gem Office Products, we can spread our risk and feel a little less vulnerable. And quite frankly, Gem is not making high soft money – or indeed pricing – demands that are unrealistic. It’s a dangerous game if, as a brand manufacturer, you build your strategy around a particular customer or indeed channel. That said, Spicers and VOW are a large chunk of our revenues, so it’s unthinkable to lose them, but I think what this new competitor does is that it offers choice.”

Gem Office Products’ launch date – sometime this quarter – is ambitious, so much so that one manufacturer that is essentially interested has put joining Gem on hold for now. The source says: “We haven’t signed up yet, but that’s not because we have doubts about the viability of a third player; it was essentially a timing issue for us. I just couldn’t see this happening in the timeframe they are talking about. So we’re going to wait to see how the market reacts.”

Secondly, he adds, the company is concerned about ramifications from the two other wholesalers: “We’re not a brand leader in the categories we operate in and we’re very mindful of our contractual agreements with Spicers and VOW. Essentially, we couldn’t take the risk at such an early and uncertain stage.”

And his concerns are clearly justified, as Ball makes clear: “Obviously we cannot dictate to a supplier if they do or do not supply to another party. However, if Spicers is investing in a broad range of products across a multiple range of SKUs for that manufacturer, then in doing so we would expect to have the best commercial terms and the support in the marketplace to allow us to sell that whole range of products. If that manufacturer wants to then cherry-pick certain lines to an alternative provider at a similar cost then I would say that that does not justify the investment that Spicers is making and we would have to reassess our relationship with that vendor.”

One of Gem’s key positives starting out is that it will immediately have considerable scale rather than just scratching the service with a very limited range. It’s also backed by a huge organisation and as such will have deep pockets and support.

The number of SKUs frequently bandied about is 8,000, but that is a fairly fluid number according to Haworth. This is considerably less than what Spicers and VOW are offering and perhaps more in line with a typical contract stationer range. Truline also has a similar range but obviously has the back-up of VOW.

A large percentage of that ‘new’ SKU count will be office supplies, with some other categories like facilities management thrown in with more restricted lines. And, as Haworth adds, resellers will also have access to the parent company’s wider product portfolio’s such as Advent Data’s EOS, Micro-P’s mobile solutions, etc.

Will that overall range be big enough to tempt dealers away from their first call wholesaler? Unlikely, says Irongate’s Noble: “If I knew I could buy something from Gem Office Products and it was 10% cheaper, I still wouldn’t be able to buy it because my order’s being picked and packed by VOW and delivered. A dealer who is locked in with supply and a range of services from VOW or Spicers can’t suddenly start going out and cherry-picking prices away from those two as that would create friction in their relationships.”

What’s more likely is that Gem Office Products will be talking to dealers that tend to buy from various sources or be used as a secondary supplier. As Haworth puts it: “We’re not going out targeting dealers with a view to become the market leading wholesaler/distributor overnight. We recognise that we’re new to the market and we need to prove ourselves. But we believe we have a viable service proposition to give to any OP reseller in the market.”

Haworth is talking a three-year plan for now – that’s plenty of time to dip your toes in and create some ripples. In the meantime, Spicers and VOW’s venture capitalist owners will be keeping a close eye on what’s going on in the market. 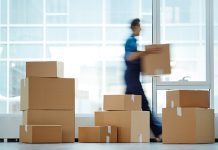