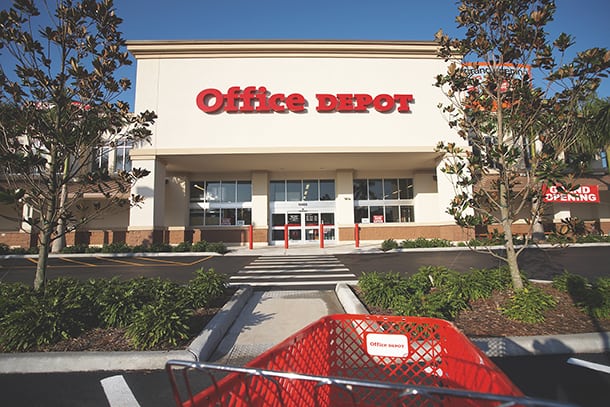 There was a certain level of expectation ahead of Office Depot’s first set of earnings results following the closing of its merger with OfficeMax last November. The results at the end of February also marked the first public ‘appearances’ of new Depot CEO Roland Smith and CFO Steve Hare on an analyst conference call.

As it turned out, the results themselves were largely a rather confusing mix of figures (labelled as “messy” by one analyst) that didn’t provide an apples-to-apples comparison of the combined Office Depot/OfficeMax results.

Perhaps that was just as well. Smith himself admitted that the operating performance in the fourth quarter had been “clearly disappointing”, with declines in all reporting divisions, but added that this wasn’t a surprise given all the uncertainty surrounding the fallout of the merger.

“It’s very difficult to focus on the business when your personal future is uncertain,” he said, referring to staff at both Depot and ‘Max. “And this was a major consideration for why we moved so quickly to restructure.”

And move quickly he has. Organisational restructuring was finalised at the end of February, less than four months after the transaction closed, and certainly ahead of many people’s expectations. A cascade process was used to build “ownership and commitment” from the management team, said Smith.

Clearly, he wasn’t overly concerned with the soft Q4 results and, despite the speed of his integration initiatives, Q1 2014 looks like it will be equally challenging, especially with the weather-related disruptions seen in many parts of the US and Canada since the turn of the year. Smith didn’t provide specific sales guidance for the quarter or the full year, saying that trends seen in 2013 were expected to continue.

Depot’s share price slipped by about 15% at one point shortly after the results were announced before recovering somewhat, as investors were spooked by a lack of visibility on results despite merger synergies now predicted to be higher than originally forecast.

These synergies (which exclude retail-related synergies) are now expected to be in excess of the previous high-end estimation of $600 million. Having said that, benefits will continue to be offset to some degree by the negative impact of lower sales, leading to a conservative estimate of a minimum of $140 million of adjusted operating profit in 2014 – about half of what some analysts had been predicting.

What will be the unique proposition?

However, stabilising sales is one of his key priorities and Smith revealed that Depot would be unveiling a “unique selling proposition” during the year as it looks to differentiate itself from the competition, and would introduce “revolutionary solutions for growth”. Quite what these will be remains to be seen, and it will be interesting to see just how ‘unique’ or ‘revolutionary’ they prove to be.

As we said in our Hot Topic in the recent December/January issue of OPI, Smith and his team have the double challenge of integrating two competitors while trying to respond to the secular issues facing our industry – and it is the results side of things that seems to be providing the biggest challenge so far.

What’s in store for retail?

A key area is the merging of the two retail networks. Bain Consulting has been hired to work with Depot on its retail strategy. A plan should be in place by the end of the current quarter and implementation is set to get underway before the end of the year.

Jefferies analyst Dan Binder called this process “longer than most expected”, but added that it would give management time to examine the locations, make strategic decisions and figure out how to best transfer sales from one store to a neighbouring one. However, he believes that the sales transfer rate from closed stores to existing stores will only be in the region of 15-20%.

Studies have indicated that there are approximately 300 Office Depot and OfficeMax stores within two miles (3 km) of each other, suggesting that at least half of these will be closed. Actual closures are likely to be more wide-ranging than that and, with 75% of leases up for renewal in the next five years, Janney analyst David Strasser said that there was a “real transformative opportunity” for Depot on the retail side.

That was a point echoed by CEO Roland Smith on the earnings conference call. “We’re going to be looking at our stores of the future […] and looking at the size of the footprint that we think makes sense going forward,” he said. “Our USP [unique selling proposition] is also going to have a big impact on the size of the store and ultimately what we will carry in the store.”