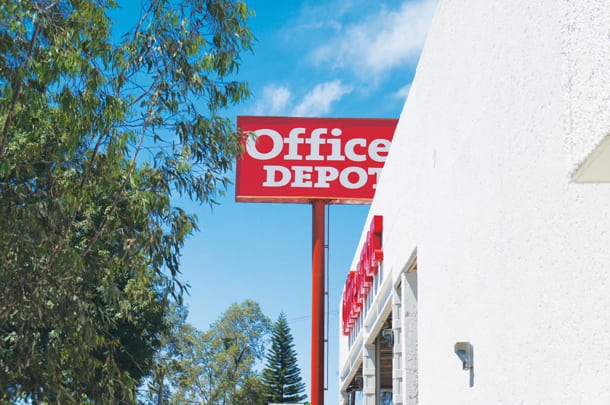 Despite all the talk of continuing to “compete aggressively” with each other, Office Depot and OfficeMax gave the impression that they are very much in merger-preparation mode during their first quarter conference calls recently.

Depot certainly played up its own performance in spite of lower-than-expected Q1 sales and profits and demonstrated a seeming lack of urgency about the need to turn things around. During the Q1 conference call, CFO Mike Newman revealed that capital expenditures this year would be up to $30 million lower than forecast as the company becomes “more prudent across the board on basically all of our CapEx allocations as we look at the potential merger”. He also slipped in a comment about up to $70 million in restructuring costs in 2013, only about a third of which had been previously announced, so it sounds like Depot is planning on more layoffs in the lead up to the merger.

OfficeMax also posted Q1 results that came in under Wall Street’s expectations. However, apart from a couple of initiatives on the retail side, there really wasn’t anything new about how ‘Max is going to tackle the issue of falling sales – the focus was again on cost cutting and waiting for the economy to improve. The company said it would be taking cost reduction actions over the next three quarters with CFO Bruce Besanko revealing that this would be achieved by cutting back on certain growth initiatives. This could possibly impact ‘Max’s SMB growth strategy, which was cited as the main area of investment on the contract side.

Newman and Besanko are heading a merger integration team to identify up to $600 million in operating synergies (excluding retail networks). Some of this will come from negotiating better terms with vendors – Depot has already met with its top few hundred vendors and believes it will get the post-merger pricing synergies it’s after – but a significant amount is sure to come from headcount reductions, although Depot CEO Neil Austrian stated that the sales force would not be a good place to start, adding that morale in the field was “very good”

Austrian was cautious about the merger as the US Federal Trade Commission is looking at the deal, but said he still expected the transaction to close by the end of the year.

Office Depot’s largest common shareholder Starboard is asking its fellow shareholders to remove four current members of the company’s board of directors and replace them with Starboard-nominated directors. Starboard – which owns almost 15% of Depot’s common shares – said in April that it would be applying to the SEC to make such a solicitation, and it formally made the request to shareholders in mid-May, asking them to elect its four nominees in place of four existing board members. Starboard said the move was “a last resort” following Depot’s plans not to hold an annual shareholder meeting prior to a vote later this year on the proposed merger with OfficeMax.

“Stockholders cannot afford to simply continue with the status quo and hope for improved results down the road if the company is merged,” said Starboard in a 17 May letter to shareholders. “Instead, now is the time to act to immediately improve the current operating performance of the business on a standalone basis and to be in position to maximise the longer-term synergies with OfficeMax if the OfficeMax merger is approved.”

Depot’s current board unsurprisingly opposes the move by Starboard, which it called a “dissident shareholder”. In a separate letter, Depot urged shareholders to reject Starboard’s proposals and show their support for the incumbent board members, providing “several compelling reasons” for doing so. These included highlighting that a shareholder with less than 15% of common shares would effectively control almost 40% of the company’s board, and claiming that Depot was already dealing effectively with all of the points that Starboard had raised concerning operating performance and maximising shareholder value.

This last point includes the future of Office Depot de Mexico which is the subject of takeover interest from joint venture partner Gigante. Negotiations over a possible $720 million deal are ongoing and could well be concluded in the near future.

As to the results of Starboard’s shareholder solicitation, that should be known sometime in July.