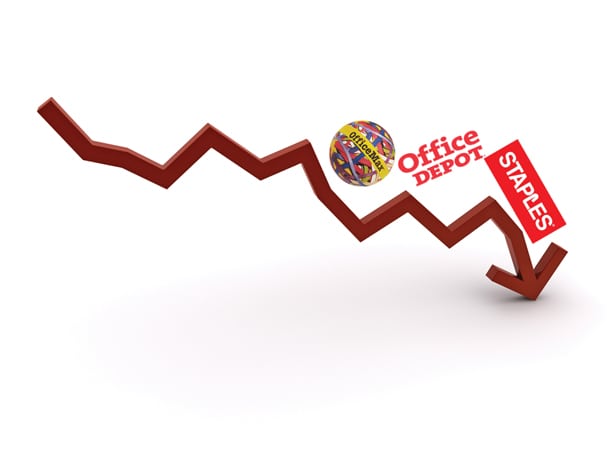 Recent quarterly results have highlighted the struggle OP companies are continuing to face to achieve top-line growth. Office Depot, OfficeMax and, most recently, Staples all reported declines in sales in the second quarter and the trend looks like it will continue for the rest of the year at least. For all the talk of opportunities, new categories and synergies, tens – in some cases hundreds – of millions of dollars are being wiped off the top line each quarter which means that cost-cutting is inevitable in order to prop up margins.

Depot and ‘Max are obviously heading towards a merger, but have stated that they will maintain their independent, competitive strategies until such time as the merger is confirmed. That doesn’t hold totally true for Depot which confirmed that it had put development of its new – and much heralded at the time – smaller store format on hold as it cuts back on capital expenditure ahead of the merger.

There are some new initiatives at Depot such as the revamped loyalty programme, the back-to-school (BTS) promotion with pop group One Direction and the addition of new mobility products in stores to try and offset declines in the technology category, but these aren’t expected to have a material effect on sales. Likewise, sales growth at Copy & Print Depot and in the breakroom category is not sufficient to offset the overall downward trend.

On the contract side, Depot is starting to feel the effects of some pre-merger ‘leakage’ as Staples and the independents start to aggressively go after customers and CEO Neil Austrian said there would be “continued pressure” with enterprise customers as they took a wait-and-see approach with respect to the merger. On the flip side, there were gains reported in the K-12 schools and SMB channels – both areas that Depot has been throwing resources at lately.

In the International division, the overriding message is about slowing the rate of decline rather than any kind of growth trajectory. There were pockets of growth in the second quarter such as the French retail stores, or contract sales in the small Swiss and Austrian markets, but the division made an adjusted operating loss and sales are expected to be down in the mid-single digits again in the third quarter.

‘Max, to be fair, showed a bit more enthusiasm for new ideas and projects during its quarterly conference call as CEO Ravi Saligram recognised secular declines in traditional categories and the quickening pace of workplace digitisation. Perhaps Saligram has more at stake than Austrian if, as thought, he is vying for the role of CEO of the merged companies. ‘Max will continue to invest in its new Business Solutions Center concept and said that same-store growth is being achieved in a number of “accelerator” stores. It also pointed to recent additions to its services proposition such as the website creation partnership with GoDaddy.

Australia was singled out as a major cause of the sales and margin drop at Max’s International Contract division with the blame put fairly and squarely on the economy. This is not the first time the Australian economy has had a hiccup though, and it seems that ‘Max has woken up to the fact that there is a small business customer in that market with the news that it was going to target this segment. That certainly sounded like a bit of ‘déjà vu’ from a few years ago.

Taking a leaf out of Staples’ book, ‘Max has been increasing online SKUs in categories such as health and safety, packaging and art supplies. That helped officemax.com to achieve double-digit growth in the quarter. However, online sales are reported in Contract division revenue, and therefore this underlines the pressure in other areas of the Contract business.

It’s surprising that neither ‘Max or Depot have followed Staples’ lead by integrating their dotcom websites with their retail stores and providing a fully integrated offering for small business customers. Surely that will be on the agenda post-merger.

Incidentally, ‘Max announced that it had just established a ‘Digital Innovation Center’ to help develop digital solutions for an omnichannel shopping experience. That sounds like a carbon copy of Staples’ Velocity Lab which opened at the end of last year, but at least it shows that ‘Max is still willing to invest in innovation.

Turning back to the issue of growth, assuming that the merger is approved at the end of this year, then – to some extent – the pressure will be off to improve the top line as the new entity works towards achieving up to $600 million in synergies that have already been identified even before it tackles the $2 billion cost base that the combined store networks represent. It would be understandable, therefore, if growth initiatives were put on hold while the integration took place.

But that would be a mistake.

The underlying secular issues are not going to disappear because of the merger. In fact, with the current pace of change, who really knows what the market will look like in, say, 18 or 24 months’ time? That robust balance sheet of the ‘NewCo’ should be used to drive growth as quickly as possible, and probably in the small business channel. That means not only investments in expanding these adjacent product categories and growing digital capabilities, but in service-related acquisitions. It’s all very well establishing partnerships to help SMBs create websites, but that’s hardly transformational. Going out and acquiring the service partner (or partners) might be.

All eyes were on Staples at the end of August to see if it would buck the downward trend reported by its two main big-box rivals a few weeks earlier. Unfortunately for the Framingham-based giant, its performance was worse than expected, especially in its North American retail and international units, sending its share price sliding by 13% on the morning it released its results.

CEO Ron Sargent said that Staples continued to make progress on its strategic plan to reinvent the company despite these latest results. However, the company lowered its full-year forecast and is now expecting 2013 sales to be down in the low single digits versus last year. Sargent warned of “more aggressive” cost-cutting actions in the second half of the year to try and offset the predicted lower sales.

On the plus side, the facilities and breakroom category continues to show strong growth – it was up by around 20% at NAC and in the mid-teens at US retail in the second quarter as the category is rolled out into more stores. About a dozen of the new, smaller 12K format stores have been opened with “encouraging” results, with sales achieving an average of 95% of those of their big box equivalents. NAC sales teams have also been increased to add specialists in new product categories such as facilities and print and as Staples eyes grabbing share in the aftermath of the Depot/’Max merger.

The big question is when will all these growth initiatives combined have sufficient scale to put the top line back into positive territory? Staples didn’t have the answer to that, but don’t be surprised if this time next year we finally start to see results.