Peter-Paul Ngwenya and Lara Matisonn have resigned from the board. 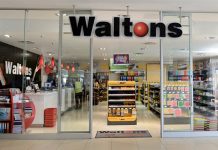 Bidvest doubles down on cleaning