To many, Nicolin’s departure from Esselte came as no surprise. After three and a half years as CEO, the completion of the Dymo sale on 23 November not only allowed him to cash in and count up, it also enabled him to achieve his goal, plant his flag and, as it turned out, walk away.
Nicolin, previously an investment banker who had already worked at Esselte as EVP before returning as president/CEO in July 2002 upon the purchase of Esselte by private equity firm JW Childs Associates, was brought in to successfully lead the company’s restructuring efforts, make exponential growth and – it is believed – leave within a certain time frame.
Tagged as someone who prefers to grow a business rather than maintain it, Nicolin was faced with this big picture opportunity at Esselte, and he delivered.
Completion
As the official release stated: "He successfully led the company’s restructuring efforts, while achieving growth in the Dymo division and completing the acquisition of the rapidly growing Xyron business." In addition, Nicolin shifted significant manufacturing volume to low-cost countries in eastern Europe, Mexico and China and, through lean management, improved working capital turns by 60 per cent.
In an email to colleagues and friends, he said on his departure: "The completion of the Dymo divestment to Newell Rubbermaid is a logical point for me to move to the next challenge." It is still unsure what these next challenges may be, but many predict that he may move to another company and perform a similar type of turnaround.
His replacement at Esselte, Gary Brooks, president of the company’s US filing division, is expected to bring a new management style to the company’s helm, while also continuing at the head of the US division.
When asked what he felt differentiated him from Nicolin, Brooks said: "Magnus’ vision was to take time, energy and resources into Dymo and he felt that he accomplished that goal. I have a broader experience in lean management, having executed and changed companies before through this principle. From an educational standpoint, I am more knowledgeable than him," he said, and then added jovially: "But he is taller than me."
Knowledge
Although Brooks has only been with Esselte since March 2005, he has 30 years of industry experience when it comes to leadership and skills from developing a company from start-up and beyond. In particular, he is known to be a "lean business practitioner", pulling experience from his time at The Wiremold Company, where he was president from 2002 to 2004, and group president of three independent subsidiaries from 1998 to 2002.
One area where Brooks claims he falls short of Nicolin is his knowledge of Europe. "I am not as strong as Magnus from a European standpoint, although when I was president of Wiremold, I looked after the European operations, which focused particularly on the UK and Poland."
Brooks says that he has no intention of implementing his US business strategy in Europe and that in fact, he plans to leave 99 per cent of Esselte’s European management to the leaders on the European side such as Cezary Monko, head of the European division, in whom Brooks says he has "absolute faith".
Brooks claims that the direction for Esselte now "is pretty clear". He says that a strategy of lean management will allow the company to focus on the elimination of waste in all service processes, eliminate complexity and drive systems to be less complex in order to be a more efficient company to do business with. Being quicker and faster and taking complexity out of the chain will also help Esselte drive new products, he adds.
But will the process of "leaning up" involve staff cuts? On this, Brooks is vague. "We will look at waste at Esselte and re-work non-efficient processes. Like any other organisation we have overheads, but we have no plans at this point. Right now there is a lot going on with the Dymo divestiture, so we need to make cost cuts associated with Dymo."
Excited
Despite his rapid promotion to CEO, Brooks claims he was not geared up for the role. "I was brought in for the specific role for the filing division. I didn’t know Magnus was going to leave and I didn’t know this was going to be my next position, and I was happy running North American operations. [When the board knew of Nicolin’s departure] it asked if I was interested because I have a background in lean and private business experience. It also helps to settle the troops if you recruit from internally.
"I am excited. I have learnt a lot from Magnus and I feel very comfortable," he added. 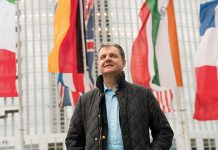