Around 120 VOW+ partners convened close to Birmingham to find out more about the company’s recent performance, to hear an update on the initiatives and benefits exclusively available via the VOW+ programme, and to listen to a number of engaging speakers talk about the opportunities facing UK independent dealers in areas such as managed print services (MPS) and facilities management (FM).

Although most in the audience didn’t need a reminder, he spelled out just how tough trading conditions are at present in the UK as the effects of a £95 billion (£150 billion) squeeze on government and public sector spending filter their way into the general economy. “It’s going to get worse before it gets better!” was the message from the stage but thankfully Butler proceeded quickly to cite many reasons to be positive.

For example, there’s the sheer size of the UK business products market estimated by VOW to be worth £15 billion if you include EOS, hardware and FM sales. Butler’s assertion that UK dealers and contract stationers have just shy of £4 billion suggests “an addressable market opportunity of over £11 billion”.

VOW has identified a number of initiatives and categories that, while not exactly ground breaking per se, did underline the theme of the day – a laser focus on new initiatives and services to increase consumer stickiness such as FM and EOS product opportunities, and MPS, shredding and corporate gifts. Butler reminded dealers that VOW is committed to repositioning itself as a business supplies and solutions provider and not just an office products wholesaler.

The company also identified a number of areas where it was focusing on being smarter and making efficiencies through taking a fresh look at its internal business practices, such as investing in new shrink wrap equipment to significantly reduce damage to paper goods in transit, bringing legal counsel in house and so on.

But the key focus of the event was the suite of benefits and services made available to dealers through the company’s VOW+ programme, which is now just over a year old. VOW+ partners now number 180 dealers and account for 50% of the firm’s wholesale business.

VOW’s Commercial Director Simon Wallis pointed to the 30 initiatives that were launched in the first year but emphasised that the future would be more about a focus on developing a few initiatives such as a secure shredding service in partnership with Iron Mountain, a rollout of its sophisticated margin management system Contract Manager and longer-term projects in the water cooler rental market and corporate gifts space.

The most recent major initiative is the company’s MPS programme which launched late in 2011. John Taylor, CEO of VOW’s MPS partner firm M2, followed Wallis onto the stage to deliver an engaging message to the dealers about why they need to be absolutely aware of the potential impacts of MPS on their particular customer base. It was short, sharp and potentially painful for any dealer not paying full attention. His industry case studies of how EOS sales have literally evaporated from the contracts of some major players will be available in an upcoming issue of OPI.

Three other excellent external speakers rounded off a timely set of presentations including market research expert Martin Wilde of OP Resource/MWA who unveiled a summary of an extensive FM study commissioned by VOW last year.

Wilde concluded that while demand for traditional office products is largely in decline, the available FM supplies market is already larger than the OP market and is not in structural decline. The national and global OP resellers are not that far ahead of the dealer community in terms of FM sales development and independents still only have a 4% market share in the UK despite the growth they have reported in that category in recent years.

In essence, the end-user market is huge and very addressable by OP dealers, if supported by an OP wholesaler. 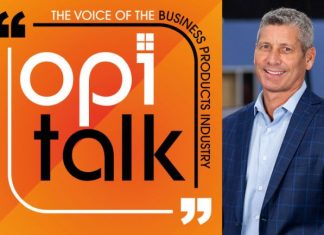