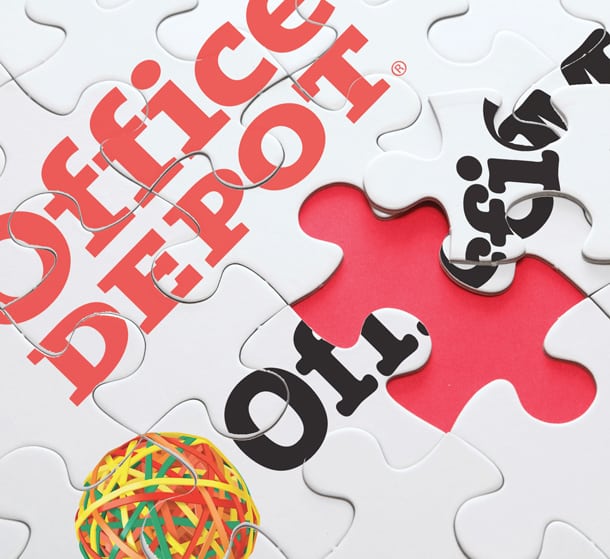 It didn’t come as a surprise following an extremely long ten-month approval process – which also included a seven-month Federal Trade Commission (FTC) investigation (see box FTC comes up to date) – but the closing of the Office Depot/OfficeMax merger was a swift affair from the moment FTC approval was given at the beginning of last November.

Following a brief spell which saw Neil Austrian and Ravi Saligram serve as joint CEOs of the ‘new’ Office Depot, former Delhaize Americas CEO Roland Smith was installed as permanent CEO and the integration process could begin. The items at the top of the agenda were making a decision on the headquarters location and putting together a senior leadership structure (see box ‘A dream team? Not yet, at least’).

Smith has something of a reputation as a man in a hurry, and those two items were ticked off before 2013 was out. Now he can focus on getting to the projected figure of $600 million in annual synergies as fast as he can.

One challenge that he will face, according to M&A specialist Tom Schinkel, is trying to drive the integration process while keeping his eye on the strategic direction of the company.

“This is a major merger and it is complicated to lead a post-acquisition integration process even when business is going well,” says Schinkel. “However, here we have a situation where Office Depot has to adapt to the digital age, as we have seen Staples doing over the past two years. My sense is that these are two major and different issues that could compete for management’s attention.”

Industry sources have suggested that Smith is certainly not hanging around when it comes to kicking off the integration process and that jobs are going thick and fast already. That’s probably not a bad thing all round: headcount reduction is one of the ‘quick wins’ in terms of the synergy target; furthermore, no-one likes uncertainty and an uncertain employee is unlikely to be at their most productive.

We had hoped to feature an interview with Roland Smith for this Hot Topic. Unfortunately, that wasn’t possible, but here are some of the areas that we’d have liked to have discussed with the new Depot CEO.

No decision on closures or store numbers has been taken, OPI understands, but sources have suggested anywhere between 300 and 500 stores – out of a current total of about 1,900 – could eventually go. That would represent a significant drop in revenue, both for Office Depot and its suppliers. We have already seen ACCO cite predicted lower sales due to the merger as one reason for reducing its own US headcount. Retail network integration, though, is likely to be challenged by different re-stocking and ordering systems and processes.

It would seem unnecessary to have two corporate brands and it would not be a surprise to see the OfficeMax brand name dropped before too long in the US – after the first wave of staff integration has occurred, for example – and all marketing efforts to focus on Office Depot. Internationally, it’s a different story, of course, with OfficeMax the dominant (indeed, only) name in Australia, New Zealand and Canada.

This is a key decision as it will have a knock-on effect for all subsequent catalogues and merchandising, and play an important part in purchasing synergies. A request for proposals is expected to be issued soon, OPI understands, and a decision could be made as early as May or June. The outcome of this bidding process is being keenly anticipated by many in the industry. SP Richards currently is first call with Office Depot, while United Stationers holds the OfficeMax account. United also has a strong relationship with Staples, so if it picked up Office Depot too, that would be a blow to SP Richards. SP Richards is the incumbent, but the new person in charge of merchandising is a former ‘Max exec, although nothing can necessarily be read into that. Does United’s wider product range give it an advantage?

There are other questions too. How would Staples react if its main wholesaler partner began servicing its sole remaining big-box competitor? And how would the independent dealer community react if United had both big-box accounts? Questions which, one way or the other, will hopefully be answered in an OPI article in the not-too-distant future.

Even before the Office Depot/OfficeMax merger was announced, there were suggestions that both resellers might be better off selling their international operations. Depot got a good price for its Mexican operations last year, but is already back in that market via the legacy OfficeMax joint venture there. On page 45 of this issue, Tom Schinkel refers to the ‘de-globalisation’ of the OP industry and he believes both Depot and ‘Max missed an opportunity to divest their international units. However, he warns that while Office Depot’s main focus will surely be on the US, it can’t afford to just leave its international division ‘as is’.

FTC comes up to date

The Federal Trade Commission (FTC) viewed the Office Depot/OfficeMax merger in a very different light to its scuppering of the proposed Office Depot/Staples merger back in 1997. Even as late as 2012, former Depot CEO Neil Austrian had expressed fears that big-box consolidation may not have been given the green light by the FTC due to its 1997 decision. Those fears proved to be unfounded as the FTC voted unanimously to approve the Depot/’Max merger – it’s just surprising that it took seven months to come to that decision.

“The current competitive dynamics are very different […] due mainly to two significant developments,” the FTC concluded, regarding the retail channel. “One is that customers now look beyond office supply superstores (OSS) for office supply products and rely more heavily on non-OSS brick-and-mortar retailers. […]The other is the explosive growth of online commerce, which has had a major impact on this market.”

For the contract channel, the FTC report revealed: “The merging parties’ documents show that they are rarely each other’s closest competitor for most large customers and that non-OSS competitors take business from the parties in a substantial number of contracting opportunities. […] Non-OSS competitors are growing in number and strength and have demonstrated the ability to win large multiregional and national customer contracts.”

A dream team? Not yet, at least

CEO Roland Smith wasted no time in providing details of Office Depot’s management structure, but the make-up of the executive management team is far from finalised.

The first key appointment was that of Steve O’Hare as CFO. That in itself was something of a surprise, with many analysts and observers expecting incumbent Depot CFO Mike Newman – who had co-led the pre-closing integration effort – to remain in the role.

“The news comes as a surprise to us,” said Janney analyst David Strasser in a client note. “We viewed Mr Newman as highly qualified and the most important executive at the company during the transition period. We have known him for years and have always thought of him as a strong CFO with strong operational and financial skills.”

Hare is a former colleague of Smith’s from Wendy’s, Arby’s and AMF Bowling Worldwide, where much of the work involved integration and/or financial turnaround, so clearly the Depot CEO wanted his ‘own man’ in place for this role.

Depot’s senior management has been organised into a six-person Executive Committee reporting directly to Smith and a nine-person Leadership Team.

Interestingly, no former OfficeMax executives made it onto the Executive Committee and no-one has yet been appointed to the key position of President North America, for which Depot said it was looking for a “seasoned executive”.

Former ‘Max execs have also been overlooked for arguably the two main roles on the Leadership Team, EVP of Retail and EVP of Contract Sales, the latter going to Steve Calkins while Juan Guerrero, formerly SVP of Retail for legacy Office Depot, will act as interim Head of Retail during an external search process (although he will be a candidate for this role). In fact, only three out of the nine Leadership Team roles have been allocated to former ‘Max executives: VP of Merchandising (Ron Lalla), SVP of Supply Chain (Larry Hartley) and SVP of Integration (Deb O’Connor).

That certainly doesn’t look in keeping with the “merger of equals” spirit that surrounded the transaction documents. And with Boca Raton selected as the company headquarters, and with former Depot people occupying many of the most senior roles, it would seem natural for a jobs balance in favour of Depot staff to filter down to regional and district roles too.

The biggest ever opportunity for independents?

At last year’s joint Independent Stationers (IS)/TriMega EPIC trade show, it was suggested by one speaker that the Depot/’Max merger could lead to about $2 billion in displaced sales due to a combination of retail store closures, delivery customer attrition and sales force layoffs. The merger was called the “biggest ever” opportunity for the independent dealer community to take market share, easily surpassing the approximately $200 million in sales that were estimated to be up for grabs when Staples acquired Corporate Express in 2008.

Whether that $2 billion figure proves to be accurate or not, we will probably never know, but independent dealers have been advised to target Depot and ‘Max accounts that might be vulnerable.

TriMega EVP Grady Taylor also believes there is an opportunity for enterprise business that was not there before, given the fact that three national players have now become two. “Large end users will want and insist that there are more than two choices and the independent dealer channel is prepared to fill that void,” he says.

Hand in hand with this sales growth potential is the opportunity to recruit from the likely thousands of employees who sadly stand to lose their jobs during the integration process. Estimates have put the number of redundancies as high as 20,000 if the new Office Depot were to align its revenue/staff numbers with that of Staples – many of those in non-customer-facing roles, but possibly up to 800 sales reps too.

The two main US dealer groups certainly haven’t been sitting on their hands over this. “The office products grapevine has been working overtime,” notes Taylor. “We have people making contacts to our members already, with many coming with a book of business to convert. We believe that once these initial individuals are placed within the independent dealer community, they will communicate back to their former co-workers that the experience of working for a smaller and more entrepreneurial entity has tremendous benefits.”

IS has been proactive in its efforts to attract this talent. “With the Office Depot/OfficeMax merger, there will be some displaced employees in sales, marketing, purchasing, etc. If this describes your situation, you are located in the US and want to stay in the office products industry, send Independent Stationers your resumé with desired location and position,” wrote the dealer group on its LinkedIn page.

Of course, it’s not just the independents that stand to gain from the merger. Staples has been readying itself for the merger since early last year by investing heavily in its B2B sales force. That was one advantage it had from the ten-month ‘limbo’ period between the moment the merger was announced and when it finally closed: being able to recruit and train up account managers in readiness for a big push when the combined entity started letting people go and the crunch time came when customers began moving onto a different – and potentially disruptive – e-commerce platform. That is something to look out for in forthcoming quarterly earnings releases.