The Managing Director of UK-based stationery manufacturer Helix has told OPI that a decision on the future structure of the company is expected by the end of next week.
However, Managing Director Mike Pell firmly rejected suggestions that recent company developments were anything to do with Helix’s trading performance.
He told OPI that 2011 had been a strong year for the company, with the UK seeing a sales increase of 6% and export sales delivering an impressive 18% growth.
The company has annual sales of around £12 million ($19 million), roughly split 50-50 between the UK and export markets.
Technically, the company is currently in administration – which may sound alarming – but Pell said that this was an unfortunate, but necessary, step as it makes the transition away from a family-owned business to a new structure, and that the company was trading as normal.
Pell confirmed that staff were locked out of the Helix head-office near Birmingham when they turned up for work one day last week after the building’s landlord learned of the move into administration. However, the employees were able to enter the building about two hours later after the company and the landlord reached an “amicable conclusion”.
Helix has been under the ownership of the Lawson family since it was founded as The Universal Woodworking Company in 1887.
Current Chairman Mark Lawson is 67 and his brother, Peter (the previous Chairman), is 76, and there is no successor lined up to take on the Helix business, explained Pell. The brothers are the two exclusive shareholders in the business, Mark with a majority 53% and Peter with the remaining 47%.
Discussions have been openly taking place with the Lawson brothers for about the last 18 months as to the future of the business, but talks with third parties really began in earnest around six months ago, noted Pell.
Things have speeded up in the last month or so as the company has conducted negotiations with a number of private equity firms and other OP vendors.
Pell said that there was one firm offer on the table, but that talks with other parties were ongoing and he expected a final decision to be reached next week at Paperworld in Frankfurt, where Helix will be meeting with the parties involved.
He could not confirm whether the company would be acquired by a fellow manufacturer or if the transition would be in the form of a private equity buyout with management involvement.
It would appear that certain longstanding debts and liabilities – including a company benefit scheme – have been an issue during negotiations, leading the company’s advisors to suggest the administration option.
Pell said the “antiquated” traditional structure of the family-owned holding company and certain debts and liabilities “have no relationship with the current operations”.
“We are trying to work through this with all parties in a very professional and integral manner to see how we can retain what is a very successful and profitable business,” stated the Helix Managing Director.
Pell affirmed that potential buyers were impressed with the staff base – Helix has just under 50 staff, most of whom are based in the UK – and that, if anything, he expected staff numbers to increase after the transition in order to provide the required service levels as the business grows.
He also stated that the company’s main suppliers had been kept in the picture over the last few months and that there was “no concern” about anything that could interrupt orders for the 2012 back-to-school season.
Further details about this story will appear in the March issue of OPI magazine. 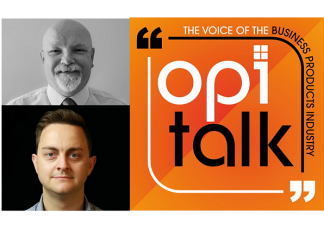 Editor - 20 November 2020
What are the priorities for Amazon Business UK? Why did a large public sector customer turn to Amazon Business during the COVID-19 crisis? Listen to...