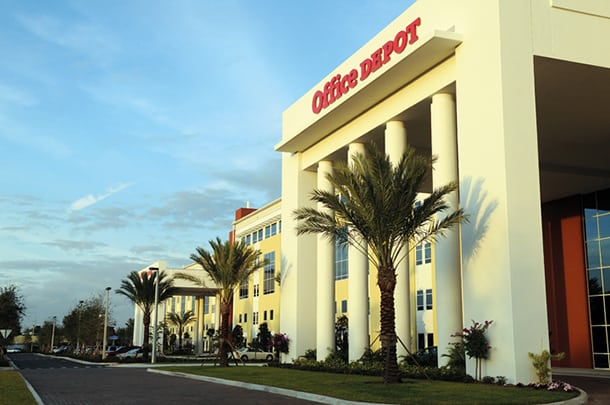 Office Depot CEO Gerry Smith has said the reseller will be aggressive in taking both organic and inorganic steps to grow. His comments came at the end of its second quarter earnings conference call that took place as Depot missed market expectations, although Smith and his CFO Steve Hare both insisted that the company was on track to meet its full-year targets.

It reported disappointing sales performance at Depot’s Business Solutions Division (BSD), where the top line was down by 6% (about $82 million) in the quarter year on year. This was despite expectations that sales trends at the unit would begin to improve following the disruptions that occurred when Staples was trying to acquire it in 2015/2016.

Smith and Hare confirmed that the customer pipeline was, in fact, stronger than it had been before Staples announced its intention to acquire Depot, but that lower sales from existing customers in some core categories, increased competition from online players such as Amazon Business, and new customers taking longer to ramp up than previously expected had all hurt the top line. Hare referred to the declines as largely being a timing issue, so let’s see if the numbers pick up in the third quarter.

There is certainly the spectre of Amazon Business hanging over the contract arm at the moment. The extent to which Amazon Business can pick up orders for long-tail, non-core items with these customers could have a profound impact on the office supplies contract model. This is leading to further uncertainty about the competitive position of the traditional office resellers.

Depot has also been slower than some in seriously expanding into adjacent product categories such as breakroom and facilities supplies. That said, in a regulatory US Securities and Exchange Commission (SEC) filing, the company confirmed that it has just acquired a “small” US firm that will improve its platform in the cleaning and breakroom market. Office Depot declined to reveal the identity of the acquired company to OPI, citing “competitive reasons”.

Since Smith came in as CEO, the signs suggest that Office Depot will commit to an omnichannel business model, with the retail stores playing a key role. This is a different strategy from Staples which is taking steps to reduce its exposure to retail and become predominantly a B2B delivery company.

There has been strong speculation recently that Office Depot will move to acquire Staples’ 1,200-strong US store network after Staples is taken over by private equity firm Sycamore Partners. Smith dodged an analyst’s question on the matter with a general comment about exploring opportunities, etc. However, his use of the word “aggressive” at the end of the call when referring to growth will do little to dispel the theory that Depot will try to acquire those 1,200 or so stores.

There are question marks over the wisdom of an aggressive retail-driven strategy, but Depot did report some positive numbers from its ‘store of the future’ (SOF) pilot stores, with improved sales versus its traditional group of stores and an “attractive” sales lift in areas such as copy and print, and tech services.

There are now 46 SOF stores in 22 US states. This number is expected to grow to 75 by the end of 2017 – although that will still only represent about 5% of the total network. One interesting development is that all of Depot’s 14 stores in Austin, Texas, will be converted to the SOF format, allowing for a full market pilot.

Other retail-focused initiatives include ship-to-store for contract customers before the end of the year and wide-format printing available in all stores during Q4. Further growth is also expected in ‘buy online, pick up in-store’, where sales were up 30% in the second quarter versus the same quarter last year.

Still, comparable retail sales fell 6% in Q2 and the channel remains under great pressure. One cannot help feeling that betting the future of the firm on retail success is a risky strategy. Sure, acquiring the Staples network would mean another period of synergies and savings that would probably keep investors happy for three years or so, but longer term…?