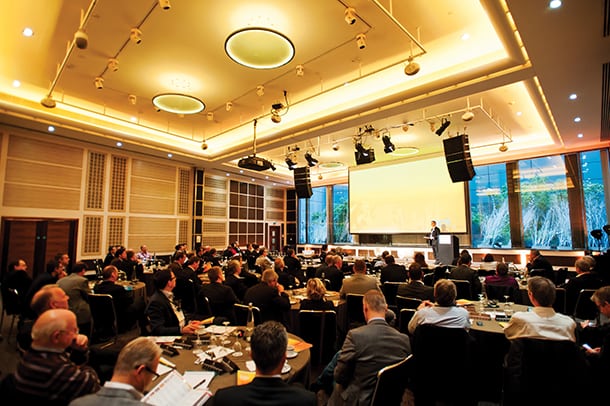 Invest in people, prepare for change and focus on your expertise were the key messages expressed to the C-level executives who attended the 2012 OPI European Forum at London’s Grange St Paul’s in December.

Senior figures from the European office products industry joined together in the UK for three days of insightful presentations, engaging debate and vital networking, generating plenty of food for thought in the process. It’s clear, as the event chair and former Kodak CMO Jeffrey Hayzlett warned, that many companies operating in the sector should now adopt the mantra “adapt, change or die” to secure their futures.

But this isn’t an easy path to take, how can it be done? OPI has picked out some of the most pertinent issues raised at the forum.

A recurring theme throughout the conference was the idea that businesses must invest more in their employees, and there were plenty of leading HR studies used to highlight discrepancies between the attitudes of senior staff and their employees regarding management capabilities. With the consensus suggesting that just one-third of employees in European business are properly engaged in their work, it is clear some companies need to establish a plan for improvement to boost their organisation’s productivity.

One senior OP industry figure indicated that the responsibility for ensuring employees buy into a company’s strategies lies at the very top of a business. For that reason, it was suggested that the CEO role should perhaps double up as ‘Chief Engagement Officer’

To optimise engagement, company owners and senior management must have some understanding of the attitude divide between the generations. Conversations that took place in the roundtables on Thursday afternoon unearthed some key differences in thinking and actions between those born between the early 1980s and the mid-1990s (Generation Y) and their predecessors – the baby boomer generation and Generation X – who tend to hold the majority of senior positions in industry.

Whether it was their differing viewpoints on the merits of using social media or the fact that Generation Y-ers tend to have a more relaxed outlook on the hierarchical structure within the workplace, there were many points raised to show the importance of communication between staff. Acknowledgement of the younger generation and learning about the way it thinks can only be of benefit to businesses looking to move forward with an engaged workforce, because they are the future of the workplace.

“[There’s] more change and [it’s] more rapid than at any time I’ve seen in the 33 years I’ve worked in this industry.”

The quote above from a senior OP exec was used to illustrate the extent to which the world of office products is changing today. The three main drivers of this change were listed as: the increasing influence of technology; the significant economic slump affecting European trade; and a shift in consumer power, driving down pricing. It’s obvious that the methods of 20 years ago are no longer sustainable in the new world.

Delegates in London were advised on ways to introduce new technologies into their businesses, such as m-commerce systems to cope with the exponential rise in shoppers using smartphones and tablets in the last three years. Amazon, a name very familiar to traditional OP firms and a company viewed by many as the single biggest threat to the industry, was named as a leader in this field. Once a customer has used its mobile site, single-click purchasing is a norm during follow-up visits, providing yet another example of how the world’s largest e-tailer is setting the standard in so many ways.

In addition to utilising new technology, ideas for expanding into new channels became key topics of discussion. The British Institute of Facilities Management (FM) estimates the FM industry is worth around £45 billion ($72 billion), and OP firms that aren’t already doing so were encouraged to explore this new territory, whether that means selling cleaning, maintenance, breakroom products, or a mixture of them all, alongside traditional ranges.

Bunzl was mentioned as the major player in the FM industry – and one that may even eye up OP firms as it looks to continue its recent acquisition activity. But one prominent UK CEO warned about the “minimal barriers to entry” for OP companies looking to enter FM; “if we don’t take the opportunity someone else will,” he asserted.

But if OP firms thought that expanding into other categories was going to be easy, the debate on managed print services (MPS) made it clear that companies must stick to what they do best. Similarly, it’s important to jettison those areas of the business in which they do not fare so well, unless they can commit the desired time and resources to make them successful.

One expert said: “Consider MPS in your firm’s broader strategy. Be honest about existing competencies before entering the market.”

There was much talk about how a recurring problem in the industry is that companies are being pushed into selling too low. One phrase used to explain OP’s driving down of prices was “shovelling air”, and there were calls to put greater focus on providing outstanding service – something the industry has always prided itself on doing well as it battles the competition from online players and mass market resellers.

It would appear that OP has a duty to itself as an industry to take cost out of its supply chain and play to its strengths, and the importance of following these core business principles kept cropping up time and time again over the three days. Remembering these values while injecting a dose of innovation on top may well prove to be the most crucial takeaways for European executives who visited London in December.

Another positive takeaway will surely have been the Thursday night dinner hosted at the spectacular Stationers’ Hall. Home to The Worshipful Company of Stationers and Newspaper Makers – the City of London livery company for the communications and content industries – the historic building welcomed delegates for a meal and further networking sessions over a glass of wine or two.

The majority of the company’s members work in or supply the paper, print, publishing, packaging, office products, newspaper, broadcasting and online media industries – and some of the forum delegates are members themselves. The venue, built in 1673, really gave those in attendance an opportunity to reflect on just how much their industry has changed over the years.

As the conference drew to a close on the Friday, the Fatboy Slim song Right Here, Right Now was blasted out to delegates. It represented an unsubtle message to the audience – as well as those in the global OP industry as a whole – that we’re at the centre of a rapidly changing business landscape; that decisions need to be taken quickly; and that the challenges faced are very real.

Those filtering out of the elegant hotel in the shadow of St Paul’s Cathedral, which has always acted as a symbol of a city’s resilience in times of adversity, looked ready to tackle those challenges head on and move their businesses forward.