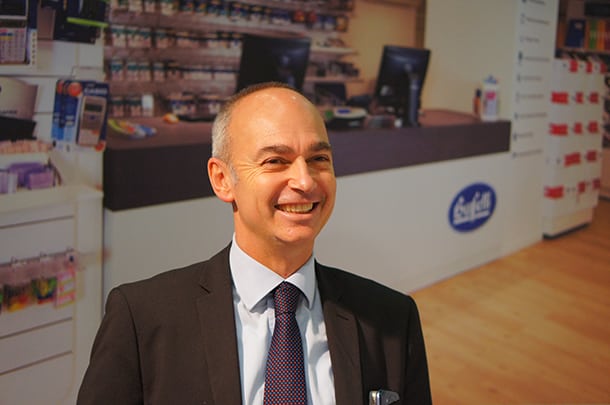 Private brand ratios of up to 35% are not uncommon at the big box office suppliers, but Italian retail franchise Buffetti is developing a concept with a staggering 90% of own-brand products in its stores.

The strategy was introduced at the end of 2011 and is now in roll-out phase after a successful trial period at a pilot store in Turin. This store turned the idea of a traditional, cluttered stationery store on its head, and derives inspiration from high-end fashion or home furnishing retailing with wood laminate floors, spaced out aisles and attractive product displays.

The company itself has taken the lead on some of the shop’s display fixtures. It helped to develop modular storage racks and trays that can each be used for different types of products, drawers were redesigned to take the extra weight of products such as reams of paper and notebooks, and little touches such as product ‘bubbles’ (transparent wall-mounted containers for smaller products) were devised.

The final piece in Buffetti’s retail jigsaw is the products themselves and the private label strategy. “If you want to buy the Buffetti brand, you have to go to a Buffetti shop,” said CEO Francesco Villa. “Our goal is to offer unique products which are recognised for their quality and their value.”

Villa affirmed that Buffetti products were around 10-15% cheaper than branded equivalents and “at least as good” in terms of quality.

About 20 stores are currently operating according to the new merchandising strategy and the plan is to increase this to 200 stores by the end of 2013. However, it is interesting to note that Buffetti is not forcing franchisees to adopt the Turin store colour scheme or display modules, just the brand requirements. Only about 10% out of the 200 re-merchandised stores are expected to adopt the new look. That ratio may change over time if tests convince franchisees that the investment is worthwhile.

The new strategy hasn’t meant that Buffetti has been immune to the effects of the economic crisis in Italy. Membership has fallen from 750 to 700 in the last 12 months. Villa said that this was mainly due to smaller, non-progressive franchisees that have not been able to adapt with the times. Despite this membership drop, Villa noted that group profitability has remained relatively stable due to cost reductions and other efficiencies.

In order to try to increase store numbers – which is challenging given the limited access to credit by the banks – Buffetti has introduced a low-cost entry point for new franchisees. This involves developing ultra-small format stores – as little as 30 sq m (300 sq ft) – in town centres or other high traffic areas. This means that young entrepreneurs can start a Buffetti shop with as little as €20,000 ($27,000), significantly lower than the investment required for a traditional store format. Of course, these new stores – of which it is hoped 80 will be opened by the end of 2013 – will be fitted out according to the Turin pilot model and brand strategy.

While there has been a lot of effort put into the retail side, Buffetti has also been working on finding online solutions for its members. This has led to both a direct B2C and a contract stationer-style B2B offering being introduced, something which is not always that straightforward for a franchised-based operation.

In both cases, Buffetti has developed a solution that combines its centralised distribution capabilities and the local presence of the franchise network, yet sees ownership of the customer retained by the franchisee.

With these three service propositions, Buffetti appears to be transforming itself into a truly multichannel player in Italy. It’s early days yet, but the more entrepreneurial-minded franchise members will surely recognise the greater opportunities they now have to grow their businesses in a challenging and changing market.