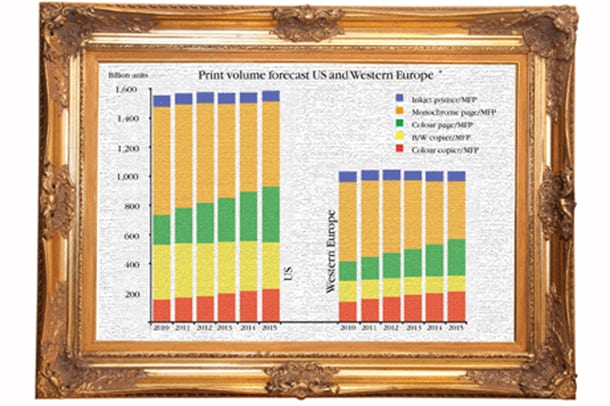 Paper, ink and toner are all commodities in decline, nothing new there. But a year ago, there was hope in the imaging supplies sector, with some companies posting fairly healthy growth. What happened?

It’s more a case of what didn’t happen, says John Shane, Director of the Communication Supplies Consulting Service at InfoTrends.

"A year ago, there was more growth in the market but that bit of recovery from the recession has dried up now. Short-term, there was the expectation that the Western economies were on a rebound. That didn’t really come about in Europe, and in the US it was muted. Also, as people got back into work, there was the hope for more print – it didn’t happen either.

"Now the longer-term impacts such as MPS, mobility (which impacts print volume) and cloud applications are taking a stronger hold and counteract any short-term positives. That said, we’re not standing on the edge of a cliff, it’s just a slow decline, stemmed by the fact that regions like Latin America, Asia and Russia are still growing."

From a distribution point of view, that’s a bleak outlook, particularly if supplies are your core business. Niek von Reth, Marketing and E-commerce Manager at Alpha International, says: “We believe the European imaging supplies market will decline by more than 10% in the years to come. But for our business and logistics model growth is crucial and we are capable of more volume without incurring additional cost or making concessions on quality and stability. At the moment we have a market share of 10% in Europe, so to keep on growing we have to find business elsewhere. Our current growth is with the small and medium-sized businesses.”

Like Alpha, US-based Supplies Network – though distributing both OEM and aftermarket supplies – is at the mercy of the OEMs and their moves. Monte White, VP of Product Marketing, describes the effect that reduced printing has had on its OEM partners: “There have been price increases from almost every OEM over the past year and in some cases, more than one increase. Also, as business has softened, OEMs are more concerned about market share and are taking more aggressive approaches to defend and win back business.”

And while the aftermarket continues to gain share as end-users look to lower costs and resellers are seeking higher margin product to offset declining margin trends, that’s not to say the aftermarket has had an easy ride. Anything but, according to Cornelis Alderlieste, Marketing Manager EMEA at Katun. “The OEMs are becoming more and more aggressive from a pricing perspective, which makes the price proposition for the aftermarket more challenging,” he says. “However, customers are looking for cheaper solutions which make aftermarket parties an even more viable option versus the OEMs.”

It’s undoubtedly been a turbulent year for both the OEMs and the aftermarket. The large OEMs in particular have been – and still are – looking very closely at their complex multi-layered business units and cut the fat, often radically so, with Hewlett-Packard perhaps the most noteworthy example. Lexmark and Kodak, meanwhile, have announced their departure from the consumer inkjet space. At the same time, they’ve all had to keep a beady eye on patent infringements, with lawsuits being filed left, right and centre against those suspected of not toeing the line.

Clover Technologies’ President of North American Sales, Eric Martin, has been at the receiving end of litigation. He says: “It’s been a watershed year in the history of the imaging supplies aftermarket both in the US and internationally, based largely on the increase in litigation initiated by the OEMs to protect their intellectual property rights. Never before have the effects of OEM litigation been so widespread or had a greater impact. We expect that the effects of these actions will have [positive] implications for our industry in 2013 and beyond.”

The situation is no different across the pond, agrees Bob Reynolds, Corporate Sales Director at France-based remanufacturer Armor, with the main issues being both counterfeits and clones. He refers to ETIRA’s Guide to Clones (see Fighting clones below). Generally speaking, progress is being made, but getting all parties involved with new technologies such as authentication programmes and regular spot checks remains a steep learning curve.

In March of this year, the European Toner & Inkjet Remanufacturers Association (ETIRA), based in the Netherlands, published its Guide to Clones, a document that sets out to better inform remanufacturers and resellers what they should be aware of when trading printer cartridges in Europe.

In addition to explaining the basic difference between the various cartridges (OEM; remanufactured OEM; new-built non-OEM and counterfeit) and the legalities of producing as well as trading them, the guide lists and dispels certain myths about trading so-called clones, including perceived non-liability as a reseller, pleading ignorance or inability to locate patents.

The Guide to Clones is designed for the European market but in many of its facets applies internationally. It can be obtained in several languages from ETIRA in hard copy or digital formats.

MPS has become an integral part of the overall OP channel offering. But is it impacting the imaging supplies sector positively or adversely? With growing print fleet optimisation and all that it entails, it’s fair to say that the overall impact is negative as less equipment is bought and what is bought is more efficiently used.

But, says Andrew Carroll, Senior Consultant of InfoTrends’ European Communication Supplies Consulting Service, as MPS engagements in mature markets like the US and Western Europe are reaching their peak over the next year or two, the effect on the market as a whole is likely to be minimal. “We look at MPS penetration by company size. The large companies with 2,000+ employees are already well penetrated by the OEMs and the uptake of MPS by smaller businesses is not going to be felt that strongly,” he points out.

It’s often assumed that the aftermarket in particular is benefitting from MPS as responsibility frequently shifts from the customer to the MPS service provider who tends to be more concerned about cost and quality and less about OEM brand loyalty. That said, this is perhaps particularly true for monochrome rather than colour supplies where there remains concern over quality.

Clover Technologies’ President of North American Sales, Eric Martin, also points to specific product categories that have seen an upsurge in sales and demand. He says: “While tying specific product trends to MPS is an inexact science, we have noted an increase in two product sub-categories in particular: toner cartridges designed for use in multifunction printers and our line of extended yield cartridges designed to offer superior performance and page yield in MPS environments. We have increased our product development in these two categories.”

Friend and foe in equal measure it appears.