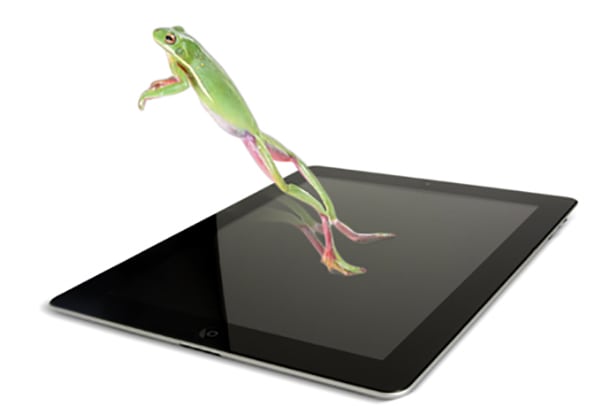 The Boiling the Frog study had its genesis in a Final Word by Martin Eames published in OPI in December 2011 (see OPI #215), in which, in his call for greater innovation in the OP industry, he noted: “A seismic change is the behaviour of office users under the age of 35; they simply do not use paper… If you are over 45 you will probably still take handwritten notes and print off hard copies of important documents.”

Like many others, I found that this statement resonated with my own experience; having started my working life during the dawn of the fax machine and sheet-fed office printer in the 1980s, I am very comfortable with hard copy documents.

When I write a report, I print it off to proof read it before despatch, and keep a hard copy (as well as an electronic version) of the final version. My project files – which often also contain meeting notes, print-outs of emails and other ephemera – are stored in an imposing set of filing cabinets, although my PC hard drive also has copies of all of these documents.

However, I saw that my 18-year-old son – now preparing to enter university – barely disturbed the slumber of the inkjet printer that I bought to support his studies and had few – if any – lever arch or box files of his college papers, since they were all stored on his PC or even ‘in the cloud’.

Through discussions with industry colleagues corroborating my own perceptions, Eames, Steve Hilleard, CEO of OPI, and I together formulated the following hypothesis (Boiling the Frog, section 3.1):

“The decline in demand for traditional office products experienced worldwide since 2008 may have not just been due to the global recession. Office workers under 35, raised in and at home with the digital age, may behave very differently to their senior colleagues; they could be more likely to work on screen only, may rarely print documents out and could take notes during meetings on an iPad or smartphone rather than on a paper notepad. Their use of traditional OP items could therefore be minimal. This would be a worldwide phenomenon because it would be driven by technology that is available – and being adopted – worldwide, kicking over traditional local cultures and working practices.”

In addition, if found to be true, it was clear that the implications of this hypothesis were critical for the future of the OP industry: currently, the under-35s account for only 36% of the labour force in the US and the UK; in 2022 this group will account for over half of the working population and their needs and behaviour will have become the ‘norm’ across the workforce.

Accordingly, we developed and launched a market research study to test the hypothesis – named after the urban myth that frogs do not notice gradual incremental changes in the temperature of the water they reside in.

From its launch in March 2012 it was clear that the OP industry’s interest in this study was immediate and wide-ranging. It appeared that many major OP manufacturers and distributors across the world had come to the same conclusion and hence required solid research data on office workers’ (rather than buyers’) attitudes, perceptions and working practices that would enable them to assess whether the hypothesis was true and – if so – what it would mean in practice in terms of demand for their products.

The final report was published in July 2012 and has already generated great interest amongst more manufacturers and distributors, keen to take advantage of the enormous knowledge base that the survey has generated.

The methodology of the survey was designed to ensure that the collected data reflected as closely as possible the reality of modern office working. Based on a small number of pilot telephone interviews, a draft questionnaire was developed which asked 21 key questions about working habits and attitudes.

The draft questionnaire was further piloted via two focus groups recruited with office workers in London, UK, one of 12 workers aged under 35, and the other of 12 workers over the age of 35. Once this had been completed, a telephone and face-to-face research programme was carried out with 443 office workers: 77% of these were based in the UK and 23% in the US.

In order to minimise the influence of variables which could potentially affect the results of the study, the business activity and job type of respondents in the sample were controlled: workers in ‘atypical’ OP usage businesses (such as legal companies and call centres) were specifically excluded, while the job function of the respondents interviewed was restricted to core office workers only (defined as either managers or clerical/administration staff), in order that any technical and specialist occupations (ie those likely to exhibit ‘abnormal’ use of OP) did not pollute the collected data. In addition, only respondents who were mainly office (or home office) based were included in the survey. Unemployed respondents were also screened out.

How hot is the frog?

The full results of the study – which runs to 227 pages and contains 12 chapters with 255 graphs and analysis tables – are of course available only to report subscribers, but OPI readers have the privilege of being able to have access to a few key results below.

Overall, the research found that many behavioural and attitudinal differences do exist between the under-35s and their older peers, but these are often less marked than is widely believed.

However, the research also confirmed that – even if the age of 35 is not the tipping point between one type of behaviour and another – behaviour within the office often does change gradually as age increases (since the report also analyses all of the data by ten-year age groups). For example, it was clear from the research that as age increases, it is more likely that “other computer-generated documents” are more frequently being printed out by office workers.

Indeed, the research found some instances (particularly in the adoption and use of new technologies), where there is a sudden step change in behaviour, but at an earlier or later age than 35. For example, compared to older colleagues, the under-25s are:

• More likely to use the internet to purchase OP

• Much more likely to never print emails out

• Least likely to take any kind of notes at meetings.

While, compared to their younger colleagues, the over-55s are:

As a result, this evidence, both of gradual change and of significant differences at 25 and 55, does suggest that – if any single midpoint in behavioural change had to be identified – 35 would not be an unreasonable age to select.

Inevitably, the research found that there are areas where behavioural change is not directly linked to age. Certainly, technology – a key driver of change within the office – has affected all workers regardless of their age, and has negatively influenced demand for traditional paper-based office products accordingly.

For example, while as many as 46% of all respondents believed there had been no change in their OP usage in the last five years, the research found that paper, envelopes, files/binders, pens, correction aids, notepads, fax and repositionable notes were most widely mentioned by respondents as now being used less than five years ago, virtually all due to an increase in computerisation, electronic storage and the use of email.

Conversely, the product categories most widely mentioned as being used more than they were five years ago included computers, USB memory sticks, printer cartridges, and external hard drives.

As a result, the research clearly supports the widely held view that there has been a decline in demand for many traditional core OP items in recent years, and that expectations for the future indicate that it is the use of computer-related products that is most likely to increase. However, even within the technology area the research found some behavioural differences between younger and older workers, particularly in the adoption of new technology. Smartphones and iPads are now beginning to penetrate the workplace, mainly through younger workers, and while most respondents still use pen and paper to make notes in meetings, some younger workers are already typing notes directly into their laptops, while the very youngest – as noted above – are not making notes at all.

In part, the decline in paper usage is being driven by changing behaviour towards printing and filing, which is often supported by company policies (particularly in the UK) restricting or advising against ‘excessive’ hard copy production and storage. As indicated above, the research found that younger workers do tend to have less propensity to print than their older peers, particularly the over-55s, who in any case will be leaving the workforce in the next five to ten years, taking with them a great deal of demand for ‘traditional’ OP items. Beyond the above, the research also found key behavioural and attitudinal differences in areas such as:

• Where OP is sourced when working at home

• The association of manufacturers’ brands with ‘higher’ product quality

• The observance of employer restrictions or guidelines regarding document printing

• The influence of the environment and cost on printing habits

• The use of text and instant messaging for business communication

• The use of social networking sites for business purposes

• Awareness and use of QR codes

• The sourcing of hot drinks from outside the office

• The sourcing of drinking water from outside the office.

Finally, and rather interestingly, the research found that it is the over-35s who are more likely to believe that there will be no changes in office working in the future, either because “things have already changed” or because “things have not changed so far – why should they in future?”

It is clear that their younger colleagues, having grown up amidst rapid change and being more comfortable with it, are more likely to expect further revolutions in times to come.

Boiling the Frog – A Guide to the Behaviour of Young Office Workers is available from OPI at www.opi.net/frog.