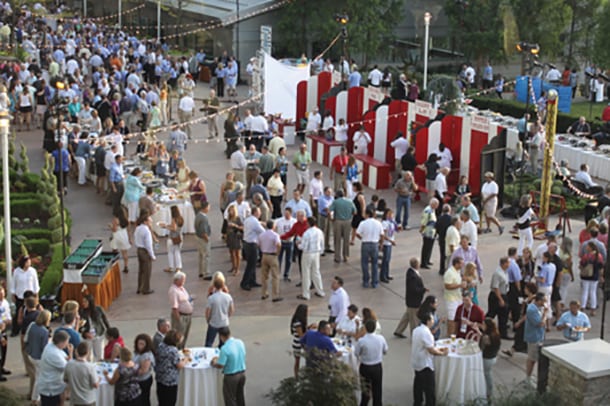 The final-night gala dinner at the SP Richards’ 2012 ABC in Washington was an unashamedly American-style celebration that tied in with the ‘Independent’s Day’ theme of the whole event.

Delegates rose as the evening’s entertainment began with a presentation of the US standard and a rendition of The Star-Spangled Banner. This was followed by a musical journey that honoured American values and ideals. While the theme had been planned well in advance, given the tough state of the economy it did send a rallying message to SPR’s dealers: “Our forebears overcame obstacles in order to succeed, and so can we”

The gala dinner rounded off a packed three-day event at the magnificent Gaylord National Hotel and Conference Center on the shore of the Potomac river that included a vendor expo, a wide variety of seminars and meetings, numerous networking opportunities and, of course, the North American Office Products Awards.

The final day included key seminars on a new SPR marketing programme and on the Your Business Source (YBS) initiative which had been introduced at last year’s ABC.

CampaignAdvantage combines online and print marketing collateral that will help independent dealers to implement weekly campaigns that rival those of the big-spending big boxes. Features of the initial offering include automated and triggered emails, automated social media integration, digital asset management and analytics, all available from an on-demand web portal.

It is also hoped that the new programme will be a key driver for SPR’s YBS dealers. To recap, YBS is the wholesaler’s initiative to develop a national brand for independent dealers and it attracted a lot of interest at a packed seminar.

While the programme probably hasn’t been moving as fast as SPR would have liked, around 400 dealers have signed up and SVP of Marketing Jim O’Brien said YBS was gaining traction, not only with resellers but also with vendors who were warming to the Business Source private label brand.

Dealers attending the seminar were pleased with the product line-up of Business Source – now over 800 SKUs – and many are using it as their ‘fighter brand’. Another important factor is that Business Source purchases form part of buy direct programmes with certain vendors.

Taking the next step to sign up to the YBS programme is more of a challenge; despite O’Brien’s assurances to the contrary, there appear to be concerns amongst some dealers about a loss of identity and individuality by buying into the YBS concept.

O’Brien said that the YBS promise was to recognise the individual brand of dealers, yet to make them all feel part of something bigger. It’s an ambitious plan, but, as the EVP said, it is a long-term project that will constantly be evolving.

Another highlight of the show was the Town Hall Meeting – the second time that SPR has held this type of open question-and-answer session – which attracted a large turnout of dealer principals.

SPR CEO Wayne Beacham told the audience that the wholesaler was not supplying sister company and MRO reseller Motion Industries with branded or private label products, nor were there any strategic-level discussions between the two Genuine Parts group entities. Other topics which were tackled included pricing, MRO supplies and succeeding in ultra-competitive markets against aggressive players such as WB Mason.

All in all, it was a very positive meeting conducted in a relaxed yet business-like manner. The concept is clearly appreciated by the dealers, and the SPR senior management team certainly looked as though they enjoyed connecting in this way with their customers.

Details of the 2013 ABC were revealed at the end of Saturday’s gala dinner, with the news of a return to the Marriott World Center Resort in Orlando, Florida, from 26-30 June being greeted with thunderous applause and cheers. If it’s anything like the 2012 event, it’s sure to be a great success!