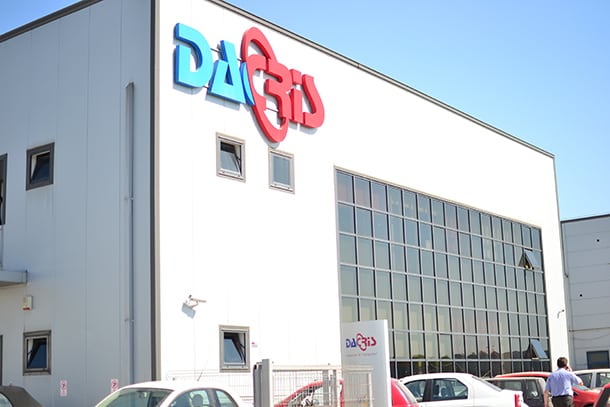 There aren’t many official statistics about the Romanian office products market, but it is estimated to be worth about €200 million ($260 million). The Dacris Group is one of the country’s top four players to collectively hold about 30% of the total OP turnover.

In the top position is RTC Proffice, which is active in the B2B and mass markets, and was recently bought by an investment fund. Dacris holds the position of the second biggest player and, as a self-confessed contender for the rest of the market share, its successes were recognised with the title of Regional Reseller of the Year at the European Office Products Awards 2012. The group achieved sales in 2011 of €13.5 million, a 14% increase on 2010 – which in turn increased 12% from 2009.

Impressively, this growth is against the backdrop of a tough economy. As Lidia Fati, General Manager of Dacris, says: “The first bankruptcy in the sector was announced in 2010, and the market came to a deadlock in 2011.” Competition is rife in such an environment; according to research by CBI Market Information Database, “the single-sourcing trend [in Romania] is creating a market with strong competition between different stationery players – all customers are looking for one supplier who can offer them a full range of stationery”.

However, CBI also predicts that “while many other European stationery markets are relatively stable and mature, Romania is one of the countries where consumption is forecast to grow consistently in the coming years”. The opportunities are there and, according to Fati, Dacris is in a good position to pursue them.

Dacris was launched in Constanta in 1993 when three members of the Fati family – Lidia, Dan and Claudiu – opened their first store on a small street in the centre of the city. The company still has two stores in Constanta, but they are used more as showrooms because retail has never been its main business.

“In 1993 the market was dedicated to public companies,” says Lidia Fati. “Then private companies backed by Romanian and foreign capital gradually appeared and Dacris oriented itself towards this part of the field. There have been considerable changes in the Romanian market over the years.

“Dacris initially focused on the B2B market, with five employees. Now we have more than 250 employees in Bucharest and other important cities in Romania, and a salesforce specialised for each channel. The only thing that remains unchanged in 19 years of business is that Dacris is the same family company.”

The group’s business model differs from the worldwide norm. In Romania it is common for businesses to encompass several elements of the supply chain, a model that Dacris has adopted; its dealer, importer and wholesaler segment, the largest part of the business, is called Dacris Impex. This has a fleet of 25 delivery vans, which account for 80% of deliveries with a courier company filling the remaining 20%, and 55 sales people bringing in the business. The warehouse of 2,000 sq m (20,000 sq ft) is located in Otopeni, near Bucharest and the country’s most important airport, and all deliveries come from this location.

This split business means Dacris has quite a diverse customer base. Clients on the dealer side include eight of the country’s ten major banks, insurance companies and hotel chains, while the wholesale and import side supplies mass-market players such as Carrefour, Auchan, Metro, Selgros and Cora. Dacris Group also has a printing business, which opened in 1995 and is now based in Constanta. This is “one of the biggest in the country” and enables the reseller “to offer a more complete service for customers”

In 2008, Dacris became the first OP player in Romania to offer a product catalogue containing eco products, making this a core element of its business. Since then, each year a catalogue is dedicated to this range.

“The supplier that has a large impact on building this range is Pilot,” says Fati. “This partner has had a green attitude for many years. From our own perspective, Dacris has initiated various campaigns on reforestation. All these actions are intended to start changing people’s mentality towards this subject, and we have achieved this at least for Dacris employees and customers.”

In its drive to increase market share, Dacris is not afraid to make investments, as Fati says.

“I think that one of the most important reasons we’re successful is continuous investment in HR and an increase in the number of employees each year, especially in the salesforce and logistics department –€75,000 has been invested in an upgraded warehouse management system this year. Our budget for marketing has doubled each year since 2009. In 2011 Dacris developed an integrated campaign including TV, outdoor and online adverts to promote our products.”

The reseller’s biggest goal for the coming year is to increase its market share by a further 7%. This doesn’t appear to be overly ambitious, given its sales growth in the past few years. In the coming year Dacris has plans to invest in its software offering for clients, make warehouse enlargements to develop an effective order process and double its capacity, improve its car park, and increase its investment in e-commerce.

A further four branches are planned for 2012 in Romania to enter parts of the country where Dacris is not currently present. The business is also intending to enter the Moldavian and Bulgarian markets this year, although no more information is ready about this yet.

In terms of the reseller’s product offering, the jan/san and breakroom products range has been improved to add “other high-quality services for company’s clients” and a current plan is to add further ranges to attract the child and teenage markets.

“We are always searching for products and suppliers that can make a difference in the market,” says Fati. “But our focus has always been on offering a high-quality service to the final customer, not just products. We always stay a step ahead by thinking what our clients need. As the crisis has affected their expenses, we decided to offer them – before they asked – solutions so they don’t exceed budgets.”

Fati also believes that providing good working conditions leads to loyal employees. She says: “In this tough economy we have chosen to invest in our employees’ continuous growth and skill development, and results have proved these are the best decisions.”

1996: Dacris became “the most important distribution company for office supplies in southeast Romania”

1997: The first branch in Bucharest was established

2000: The printing house opened a new and modern facility in Constanta

2009: Dacris became the second largest national player in the market

Locations: Based in Bucharest (Otopeni) and Constanta with six branches