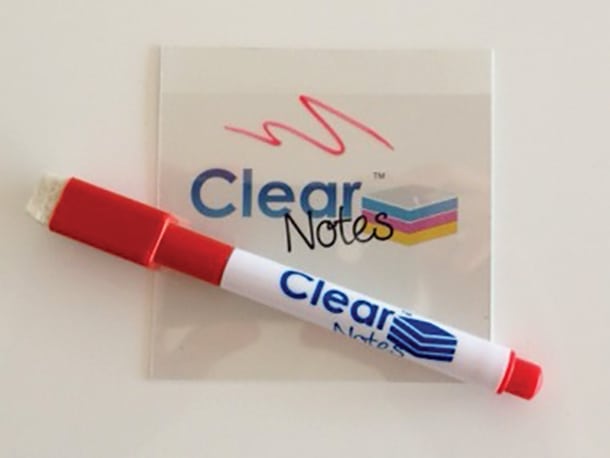 The mood was good at the recent National Stationery Show in London, UK, with many of the major players in the desktop accessories sector showcasing their wares and using the two-day event to launch designs and try out fresh ideas.

Durable and Stewart Superior were among the firms pushing new items, with the former’s fashionable Pagna range of filing and desktop organisers among the products attracting interest from visitors.

A new player in the industry, which launched its inaugural product at the event, is LUX Creations. The father-son business, which was the brainchild of recent graduate John Macleod, has created Clear Notes – a transparent and re-usable sticky note collection. It differs from Avery Dennison’s See-Through Sticky Notes – also new to the OP market, and in the shortlist for the 2012 North American Office Products Awards’ Best Core Office Product Award – in its reusability. Messages written with LUX’s marker pens can be erased, allowing for the product to be used recurrently, which Macleod says is more environmentally friendly.

It is uplifting to see young people bringing fresh ideas to the industry, and 23-year-old Macleod is hopeful that his stationery item will interest resellers and the commercial market alike. “We’re based in the UK, but we have a worldwide patent,” he says. “The nature of the product means it would not be difficult to expand this eco-friendly range internationally.”

Environmental issues are not just the concern of newcomers to the industry, of course. Established players are using the green message as a key part of marketing strategies, such as adhesive products manufacturer tesa. The German-headquartered company now includes the ‘100% recycled plastic (housing)’ logo on its range of products, including its correction and glue rollers.

Dr Jan Schumann, Sales Director Stationery Channels within tesa’s consumer division, says: “Eco products will continue to develop, driven by demand from the consumer. Concern over one’s carbon footprint is no longer a trend – it is a crucial consideration in the entire development process.”

Take a chance on innovation

Having worked in the desktop accessories industry since 1988, previously with Idealplast and now as International Sales Manager at Plastunion-owned Onside-Sweden, Michael Matsson is well qualified to comment on the marketplace. He estimates that sales in desktop accessories reflect the wider OP industry, with small declines of around 5% across Europe in the last few years. Products that remain particularly popular at his business include pen cups, waste bins and brochure holders, while the increased use of notebook computers and more advanced technology has reduced the consumer need for letter trays and magazine file boxes.

As with all office supplies categories, innovative product design will be crucial to sustaining the future of desktop accessories companies – and Matsson thinks there are a number of areas for hope in this regard.

“We think the future looks bright because of the need for smart products such as business card holders,” he explains. “[Consumers] can also change their rooms very easily with new colours and articles on their desks.”

Matsson warns, however, that resellers need to be open to new ideas for the good of the industry, arguing that some have been unwilling to take a chance in recent times.

Away from Europe, desktop accessories vendors continue to focus on product innovation and are adapting to market changes accordingly. Jaime Nascimento Jr, Export Manager at Brazil-based manufacturer Acrimet, argues that traditional office spaces will never disappear, but OP companies must follow new trends when they arise, including stocking ranges to meet the “small shift” to SOHO environments.

“Office workspace has shrunk over the years leaving little room for storage; that is why Acrimet launched its compact tape dispenser,” he says. “Most of our letter trays are also adapted to all modern workstations.”

Kylia Garver, Marketing Director at Brownmed, which manufactures the ergonomic IMAK range, says technology advancement has influenced its production patterns. “To stay competitive in today’s landscape, Brownmed expanded the IMAK line of computer accessories to include lightweight, mobile options – and the IMAK Laptop Cushion – that still provide ergonomic support for prevention and relief of repetitive stress injuries,” she notes.

Over the last 20 years, the phenomenon of the supermarket/hypermarket as the ‘one-stop shop’ for all supplies has had a growing impact on many thriving specialist industries, including the OP desk accessories world. It is difficult to gauge its exact financial impact, but the convenience and cost effectiveness of shopping in the local superstore is difficult to compete with. Add to this their capabilities online and huge marketing budgets and a picture starts to emerge about just how powerful these multi-store, multinational behemoths have become.

Mike Pow, UK Sales and Marketing Manager at tesa, doesn’t doubt supermarkets’ importance to manufacturers, but the situation differs by region. “Supermarkets are of rising significance to the industry, particularly in continental Europe,” he notes.

One vendor source told OPI that although supermarkets have taken a huge OP market share over the last decade, times may be about to change.

“Supermarkets find that stationery doesn’t earn its keep out of season, for example when it’s not a back-to-school period,” the source explains. “Having taken a large portion of the market to begin with, a lack of credible range has started holding them back and their share of the market has plateaued – it could now drop. In the UK, the likes of WH Smith and Ryman have survived by bringing in new products, innovating and carrying a credible range.”

Speaking of the Nordic region, Onside-Sweden’s Matsson says: “There has been a big change in the Nordic countries where department stores such as Co-op and Åhlens had 20% of the SOHO sector and back-to-school markets, until this more or less went away in 2004 and never returned. The impact from supermarkets and department stores remains very poor.”

It seems as long as these large businesses keep at least a toe in the OP world, they won’t concern themselves with market share. As Phil Dorrell, Director of consultancy firm Retail Remedy, explains of the UK’s Sainbury’s: “Its new non-food footage contains sensible product ranges that are competitive without being cutting-edge and costly. Once again, [its merchandising choice] all comes down to common sense.”