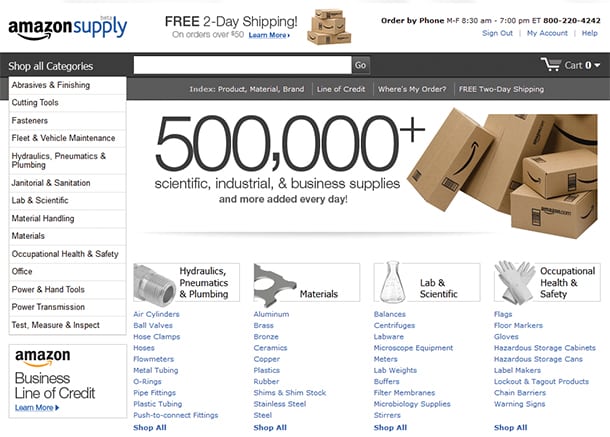 The world’s largest e-tailer Amazon has already become a force in the OP sector in a number of markets with its consumer-oriented websites. Now it has set its sights firmly on the B2B space with its new AmazonSupply offering for business and industrial customers in the US.

The AmazonSupply site – which Amazon says just acts as a separate URL to its main site – offers a staggering 500,000+ items in 14 product categories. The categories include ‘Office’ (17,400 items), ‘Janitorial & Sanitation’ (10,300 items) and ‘Occupational Health & Safety’ (22,300 items), as well as more specialised categories such as ‘Laboratory and Scientific’

A key idea is that customers who have been regular users of Amazon for personal purchases can now enjoy the same, familiar experience for business use.

Customers can sign in using their regular Amazon account and the site offers services such as free two-day shipping on orders over $50 and free delivery for existing Amazon Prime members.New functionalities which will be attractive to business users include ‘My Projects’ to create and save shopping lists of frequently ordered items.

Amazon is also offering a 365-day returns policy, lines of credit on a net 45+ days basis, technical product support and the possibility to place orders over the phone.

During Amazon’s first quarter conference call at the end of April, CFO Tom Szkutak fielded a couple of questions about the new B2B website, but didn’t give much away, saying that Amazon had inventory on hand to support that part of the business.

A clue to just how much inventory Amazon is holding is perhaps given in the fact that free shipping is given on approximately 100,000 out of the 500,000 items on offer.

With such a vast array of products, Amazon is bound to be relying heavily on the wholesale channel for supply, and the expansion into industrial and facilities products will certainly be good news for companies such as United Stationers which have been diversifying their product assortments.

Amazon was reportedly United’s fastest growing customer even before the launch of the new site. The wholesaler’s CEO Cody Phipps told analysts recently that he couldn’t comment on specific customers and that United was “still digesting” the Amazon announcement. However, he did say that it validated United’s own strategy of cross-selling more products into more channels and offering a broader digital mix.

“We think that we’re well-positioned to help people that want to pursue those types of initiatives,” he said. “Take away from that what you want.”

The Amazon announcement may also be related to the recent product additions on websites run by Staples and Office Depot.

Rick Marlette, founder and co-owner of OPSoftware – a company which tracks the big box websites – says that Staples and Depot have added thousands of new items in the last few months.

A recent OPSoftware review of Depot’s site turned up over 80,000 items, up 20,000 from the previous review, while the most recent Staples review turned up over 6,500 new items on its website, bringing the total to around 37,000.

“Across all the chains, the most notable additions appear to be the tools, safety and MRO product lines,” said Marlette.

“You could guess that this was in anticipation of the Amazon B2B site announcement. Both Depot and Staples had some safety products in the past, but tools and MRO are definitely new ground.”

Marlette says that Amazon is showing a reverse pattern; many tool, safety and MRO market sellers are pulling items.

“Again, this could be due to the new Amazon B2B site which, according to our information, will not have market sellers as with Amazon.com,” he noted.

“No clear pattern has yet developed with the office supply sellers on Amazon.com, but one could again speculate that the OP sellers are also feeling the betrayal. This is shaping up to be the cautionary tale of what can happen when providing your sales and cost data to suppliers.”

As for resellers – both large and small – they will have to ensure that they offer compelling reasons to their customers not to switch to Amazon.