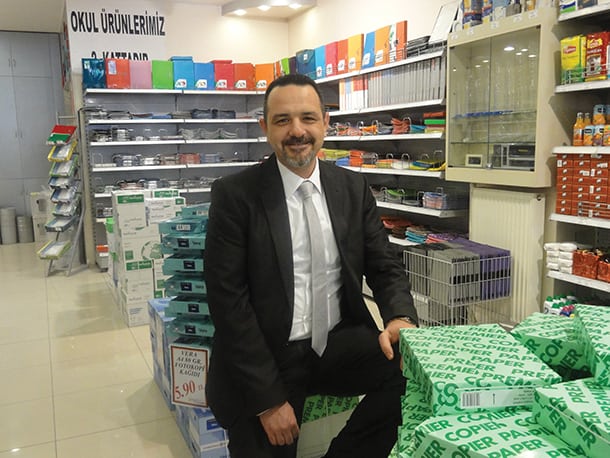 2012 looks like being a pivotal year in the history of Turkish B2B reseller Akoffice.

The entry of a major global OP reseller into the Turkish market has been rumoured for some time and Akoffice is one of the leading candidates to be involved in any partnership or acquisition transaction – along with rival B2B reseller Aktuel which has partnered with Staples since the Corporate Express days.

In fact, Akoffice has had its own under-the-radar partnership with Lyreco for the past couple of years, helping the France-based company service its international contracts.

Despite this arrangement, Lyreco is far from being the automatic choice as the future partner of the European Office Products Awards 2011 Regional Reseller of the Year. Managing Director Alper Kisa tells OPI that eight overseas firms have shown an interest in the company.

Akoffice is a division of the Akçay stationery group which includes a thriving wholesale business and a growing retail presence. This means potential suitors could be interested in one or more parts of the business.

It can be assumed that Lyreco, for example, would only be interested in the B2B operations whereas Office Depot and Staples have the potential to also develop the retail side of the business – which may be of more interest to Akçay. Other candidates could include the likes of Unipapel and Austria-based group PBS Holding.

Kisa says that Akoffice/Akçay will select the partner that best fits with its development strategy, but suggests that the company is looking to make further investments in distribution and IT. As such, presumably the level of investment that an overseas partner would be willing to make would be a factor.

He adds that there is no hurry to make a decision, but does not rule out an announcement being made by the end of this year.

Akoffice has grown into the largest division of the Akçay group, which was founded in 1974. Kisa wouldn’t confirm the group’s turnover, but OPI believes the total to be in the region of $28 million with about two-thirds of that coming from Akoffice.

This is partly due to a drive this year to win new accounts – Kisa has set a new customer acquisition growth target of 5% for 2012. Akoffice’s customer base consists of medium-to-large accounts and five outside sales reps are backed up by a customer service centre with 22 staff.

The company currently has around 12,000 active SKUs – a relatively large number for a contract stationer – and this does have an impact on stock availability; next-day delivery rates are around 86%. Kisa is looking to improve on this number and is also planning to slim down next year’s catalogue to around 9,000 items.

The company’s focus is in the Istanbul region and it does not currently have offices in other cities. A fleet of 48 vehicles – including around 25 vans – handles local desktop deliveries while Akoffice partners with UPS for delivery to customers’ offices in other areas, meaning it can offer national delivery.

Other recent investments have been made in IT and product picking. The percentage of orders placed online has risen to 14% and this should rise to 20-25% this year as Kisa looks to improve productivity.

The company operates out of a 6,000 sq m (60,000 sq ft) warehouse and office facility, but is considering moving its administrative offices to a more spacious location in a building it owns which also houses one of its stores. This will depend on the outcome of negotiations with potential investors.

One thing that Akoffice does pride itself on is its personal touch and flexibility with its customers. It has no minimum order levels and it’s the type of business where staff have been known to jump into their cars to deliver an urgent order.

It will be interesting to see whether it can maintain customer intimacy if and when one of the international players finally makes its move.

The Akçay group currently operates four Kirtasiye Dünyasi (Stationery World) stores across Istanbul, but the plan is to increase this number to 20 over the next five years. This will also include a number of stores in other cities in the surrounding Marmara region.

The store that OPI recently visited operates on three floors and carries an impressive range of products including traditional office supplies, school products, art and craft supplies and books. There is also a dedicated copy and print corner, but the store seems a bit light on technology products and IT consumables.

On the other hand, some product categories such as pens and glue sticks are present in a vast number of brands and may benefit from line reviews similar to those currently taking place in the B2B catalogue. There would also appear to be opportunities for private label products.

A couple of products that caught the eye were Pritt-branded ink pens – only available in Turkey apparently – and Faber-Castell notebooks as well-known manufacturers try to develop their brand equity.