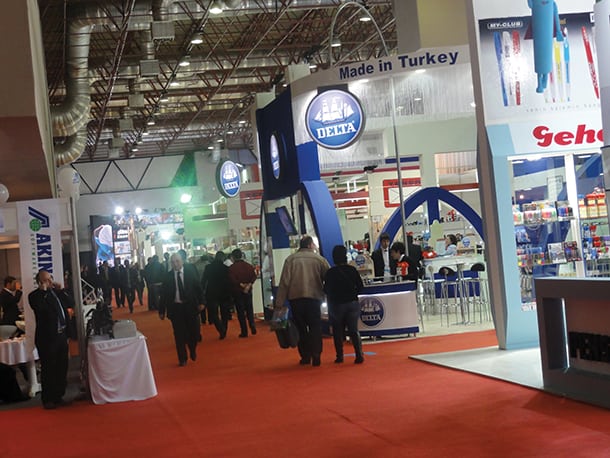 It is probably not a widely known fact that the Ofis stationery and office products show in Istanbul is actually the OP sector’s second-largest dedicated event in Europe after Paperworld in Frankfurt, and the fourth largest in the world behind ISOT in Japan and the Escolar show in Brazil.

The Turkish OP market is estimated to be worth around $3.5 billion and the country is definitely earmarked as a growing emerging market – GDP was up by 8% in 2011 and is expected to grow again by 4% in 2012.

Most exhibitors were locally based: Turkish manufacturers, distributors of international brands or, less commonly, fully-fledged subsidiaries. Italian group Fila, for example – owner of the Lyra and Dixon Ticonderoga brands – has just established its own subsidiary in Turkey and was exhibiting under its own steam for the first time. Only four overseas exhibitors were actually there with their own standalone booths.

Some of the major international firms that do have Turkish subsidiaries such as Esselte, Newell Rubbermaid and BIC chose not to exhibit this year.

One possible reason that most OP companies operate in Turkey via a local distributor is the exceedingly long payment terms that prevail in the market. It is the norm for resellers to settle supplier invoices 9-12 months after placing an order.

Levent Artan, owner of the Uni operations in Turkey and a former President of the Tükid trade association, told OPI that the supplier side is basically funding the stationery industry in Turkey.

It was a sentiment echoed by other major manufacturers, but appears to be a situation that they are unable to change. A strong cash position is therefore essential and it is not uncommon to find that stationery firms operate in other sectors as well. Leading manufacturer Eraysan, for instance, recently invested millions in developing a smartcard production facility and leading writing instruments manufacturer Adel – a joint-venture with Faber-Castell – is part of the huge Anadolu conglomerate.

Traffic was steady, if unspectacular, on the first two days of the show when OPI was there. Current Tükid President Mehmet Helvacıogl was pleased with the turnout, however, stating that the amount of orders placed was up on last year. He confirmed that overseas visitor numbers were expected to be around 1,400 from more than 20 countries.

Many visitors come from neighbouring countries and regions where Turkey has a strong sphere of influence. Uni’s Turkey operations, for example, are responsible for sales in 14 countries and Mas Buro’s Mas brand is well known. Leading Turkish luxury writing instruments manufacturer Scrikss is developing its brand in the Middle East and former CIS countries, among others.

The presence of buyers from big-box resellers and international multiple retailers at Ofis indicates that Turkish suppliers have a place in the global sourcing picture. Helvacıogl pointed out that Turkey is the world’s 11th largest exporter of stationery and office products, and Eraysan exports to over 35 markets.

There are reportedly 18,000 stationery resellers in the country and numerous small wholesalers, although numbers appear to be declining due to natural wastage more than any great market consolidation. Istanbul stationery wholesalers moved to the modern Istoç wholesale market a couple of years ago and several firms and Tükid have since moved offices and/or distribution facilities to be nearer to the Istoç area, more conveniently located near the Ataturk international airport.

One talking point at the show this year was the rumoured entry of a leading global player into the Turkish market. Similar rumours abound each time OPI attends the show, but it appears that something really might happen this year. You can read more about one possible takeover target, Akçay Group’s Akoffice B2B operations, in next month’s Dealer Spotlight.