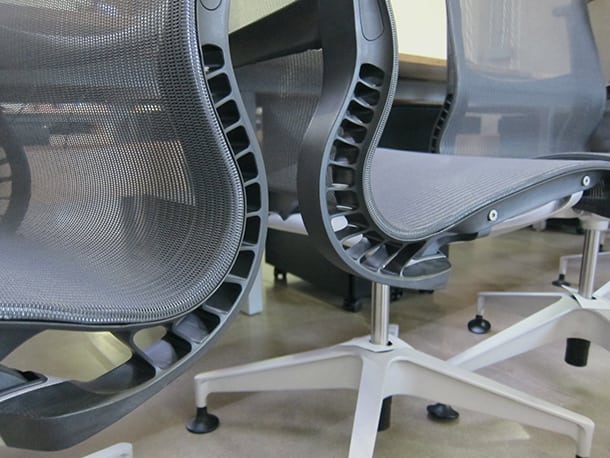 A recent article in Vanity Fair magazine criticised the stagnant state of design practices in America. According to designer Kurt Andersen, who penned the provocative piece, everything from buildings to cars are at a creative standstill. Andersen also cites the Aeron office chair manufactured by Herman Miller, which he says is still being used two decades after its creation.

It’s debatable whether Anderson’s theory applies to all forms of design but he certainly brushes off furniture with little investigation. The surface appearance of an office, including its furniture, might not seem radically different today but look a little closer and you can spot an infinite amount of details that have altered the way we work.

The top priority in office furniture design is ergonomics. However, as Kris Dixon, Director of Business Development at MooreCo, notes: “Ergonomics has become more of an expectation rather than a speciality, both in SOHO and commercial applications.”

Perhaps we now take for granted the innovative nature of ergonomically-enhanced furniture. And it is indeed ergonomics that continues to drive innovation in the furniture sector. According to the Business and Institutional Furniture Manufacturer’s Association (BIFMA), during the last decade new ergonomic concepts have heavily influenced the manufacturing of new types of office furniture.

The furniture sector incurs a large amount of costs including insurance, freight and administrative charges. However, like most industries keen to innovate, firms still invest a substantial amount of revenue in the research and design (R&D) process. BIFMA states that all these operating costs combined amount to roughly 23.5% of a company’s sales.

The rise in revenues of the seating segment, which grew from 26.5% of total furniture sales in 2006 to 33.1% in 2011, has also put an added emphasis on ergonomics. This is because ergonomically designed chairs are traditionally sold at higher prices, in theory giving better margins.

But despite this push to innovate, the R&D process has inevitably been brought into question during these economically challenging times. “When the recession hit, we saw the R&D ‘influencers’ being eliminated from a lot of projects because of the perception that they lead to decisions being made for more costly office furniture solutions,” says Eric Volcheff, VP Marketing and Strategic Business Growth at US furniture manufacturer Mayline.

This trend can again be associated with the fact that good ergonomics is something consumers have come to expect from office furniture, so they see no need to pay more for it. According to Volcheff, things have now improved for the R&D  process but consumer attitudes remain the same.

“We see the R&D group getting more involved again, but the expectation from the customer is for manufacturers to provide high-design aesthetics at mid-market pricing.”

It’s a tough balancing act for manufacturers and one that has led many to increasingly market their ergonomic credentials online (see box ‘Online marketing’ to stand out from the competition as well as to save money. Manufacturers are also turning to external institutions for help with research.

As MooreCo’s Dixon notes: “With studies being made available by schools like Cornell’s Human Factors and Ergonomics Research Group, there is readily available data to assist in new product development.”

We now have a much greater awareness of the benefits of good ergonomics, but this heightened understanding was not reached overnight. Instead, a number of organisations have championed ergonomics, including manufacturers, industry and external associations and trade fairs. Read on to find out which bodies and events are the most influential in the field of ergonomics.

ErgoExpo is the largest annual event of its kind and takes place in Las Vegas, Nevada. The trade fair attracts visitors from around the globe and exhibitors from a variety of different fields including manufacturing, offices, industrial, call centres, healthcare and pharmaceutical facilities, and construction. Among the office products firms exhibiting this year are 3M, Fellowes and Steelcase, with the latter two also sponsoring the show. ErgoExpo will take place on 27-30 November.

The IEHF’s longstanding commitment to the field of ergonomics dates back over 60 years. The institution’s history can be traced back to 1949 when Hywel Murrell, former head of the Naval Motion Study Unit, gathered a small group of researchers in Oxford, UK, to create what would eventually be known as the Ergonomics Research Society and later come to be known as the IEHF. The IEHF’s mission has always been to promote public awareness of ergonomics.

Formed in Switzerland, the IEA is an international organisation, with a mission statement similar to that of the IEHF. Among the IEA’s initiatives is Global Ergonomics Month during which the organisation’s members stage educational events in their regions. The IEA has also started a project entitled ‘Ergonomics Without Borders’ with the aim to assist ergonomists in developing countries.

Ergonomics has become an important selling point for both manufacturers and retailers of office furniture. This is evidenced in the amount of online promotions of ergonomic products that are currently taking place.

From manufacturers keen to emphasise their exhaustive research and design processes to retailers aiming to target important demographics, pushing ergonomic credentials can be a vital tool for companies looking to stand out in a highly competitive furniture market.

Last year, the big box reseller published two surveys with regard to office furniture and ergonomics through its B2B division Staples Advantage.

In May 2011 the OP giant asked more than 140 telecommuters from various companies about their home office set-up, furniture and technology. The survey found that the majority of companies (87%) don’t provide furniture for their home workers. Additionally, a sizeable proportion of respondents (44%) said that their most desired item is a comfortable chair. Therefore Staples Advantage insisted that companies should aim to improve ergonomics for telecommuters which “can help employees be more productive and healthy”

This survey followed on from a similar ergonomics report published by the company in February 2011. The findings from that online publication stated that 86% of office workers had reported some discomfort from their office furniture and equipment.

Furniture manufacturers Herman Miller and Knoll both display their extensive research about all things ergonomics on their respective websites. Here you will find video interviews with product designers, essays, articles and links to external ergonomics associations.

It is no wonder that these two manufacturing giants are keen to display their research and design skills; after all, it is precisely this innovative approach to furniture that has seen several of their products featured in the New York Museum of Modern Art’s permanent collection.

“In the US, we have for several years engaged in a proprietary programme, ‘workanomics’, to educate facility managers about the importance and financial benefits of a healthy and comfortable work environment. In the EU, meanwhile, Fellowes’ award-winning Professor Ergo campaign has been very successful in providing health and comfort advice to office managers and workers.” 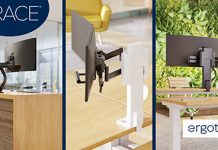