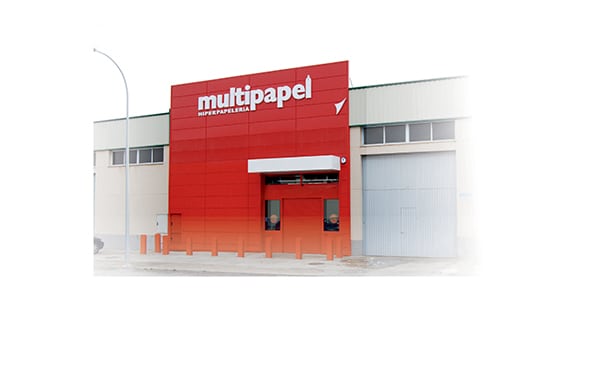 To say that Spain’s had a tough time of late is like asking Ron Sargent if he was happy with Staples’ recent financial performance or questioning Amazon’s impact on the OP industry.

Every sector is affected, with non-essential spending practically at a standstill. Unfortunately, office products sit very well in that category and have consequently taken a real hit over the past few years in the country.

Multipapel is a good example for this. A regional player, based in the province of Toledo and close to the capital of Madrid (about 35 km away), Multipapel has two retail stores in the small towns of Illescas and Yuncos, a regional contract presence and a nationwide B2B/B2C web store.

José Maria Mateos Rodríguez is the second generation Owner/Managing Director of Multipapel. He joined the family business in 1997 when the first office supplies store was opened in Illescas. He says: “Over the past three years revenues at Multipapel have fallen considerably due to the continuing crisis that’s plaguing Spain. Consumer consumption has been and still is falling – people only buy what’s absolutely necessary.”

But it’s not just retail where the company is suffering. In fact, retail – particularly school supplies – has partially been offsetting the severe losses in the B2B channel where Multipapel has been badly affected by the cutbacks in the public sector, the number of companies going out of business and the austerity measures that are being imposed.

“We generated about 10% of our revenues from the public sector; now it’s virtually 0%. There have also been real issues with payments over the past two years. Some of these have been resolved following a payment plan last year, but most recently our experience with some local government contracts has been quite difficult again.”

Mateos adds: “It’s difficult to see an industry that is not affected by the crisis, particularly where we operate in Spain – it’s historically a region with plenty of business from the construction industry, but the housing crisis has put an end to this.”

And rather than seeing a light at the end of the tunnel, this year so far has been even worse. He says: “The fact that so many businesses have gone bankrupt and that everybody is struggling so much has also meant that the big operators like Office Depot and Lyreco are increasingly dipping into our SME and locally-focused market, whereas previously they catered mostly for the large accounts. And mail order operators like Staples [under the name of Kalamazoo, acquired by Staples in 2002], Viking and Bruneau are trying to make up for lost business by offering deals that we just can’t compete with.”

All that said, being small and nimble is definitely an advantage, despite the fact that Multipapel obviously hasn’t got the deep pockets that a Lyreco or an Office Depot has.

Mateos explains: “We are small and we can take early action. Also important is the fact that if we get it wrong, we can rectify it easily. This year has been very hard and the austerity measures have really slowed consumption in all segments. For us this has meant that we had to do sales promotions at prices without VAT which basically means offering product at a discount as high as the value of tax. We’ve also had gift coupon campaigns via mobile phones or email.”

The big boxes have long been a familiar feature in the Spanish OP market. As mentioned, Office Depot, Staples and Lyreco have all had a presence in the country in various guises. It’s for that reason and to level the playing field somewhat that Multipapel decided to join independent dealer group ACCS in 1998, then and now a member of BPGI. But while it gave the company access to better prices, a good catalogue and more elaborate marketing opportunities, it wasn’t a happy-ever-after union. In 2010, Multipapel left the organisation and reached an agreement with Spicers-associated CARIP, a purchasing group which, according to Mateos – and presumably contrary to ACCS – “promised to be a professional alternative with clear ideas of business that can help us compete with the big operators and mail-order companies”

Multipapel continues to rely heavily on the support of what is now ADVEO in its marketing efforts. “We are hoping that the new Spicers + Unipapel tool will be a real asset to us and I’m very positive about the 2013 catalogue and the opportunities and alternatives it offers us. We are a local company and our advantage is that our customers know us and trust us to get them the product they need, but we need CARIP’s marketing resources to enable us to compete head on with the big operators.”

Despite the support of CARIP and now ADVEO as its wholesale partner, life’s tough and not helped by the growing presence of so-called Chinese bazaars and corner shops where products – often including counterfeits according to Mateos – are sold at rock-bottom prices.

It’s the fact that there’s no recovery on the horizon, however, that’s so hard to come to terms with, he adds. “When the economy first collapsed, we all assumed there would be an end to the crisis, but four years on and we still don’t know when the end will even start. So we must learn to manage a business that presumably will not thrive for years.”

That sounds depressing, but Mateos remains confident that his company will survive, not least because of its ability to change, adapt and innovate.

School supplies are now a big part of its portfolio, while craft products are also increasingly on the agenda. Both categories are generating good growth rates, partly because they started from a low base.

The internet, finally, has allowed Multipapel to become more of a national player. With www.multipapel.com, it is now trying to transpose its local service proposition onto the whole of Spain.

It’s difficult to take away the positives from what is happening in one of Europe’s hardest hit markets, but Mateos is stoically confident that it will be worth it in the end: “The most positive aspect of this crisis is that we will mature and learn to create and maintain a solid and profitable business. If we can do that and at the same time move forward together as an industry, it will have been worth the ordeal.”